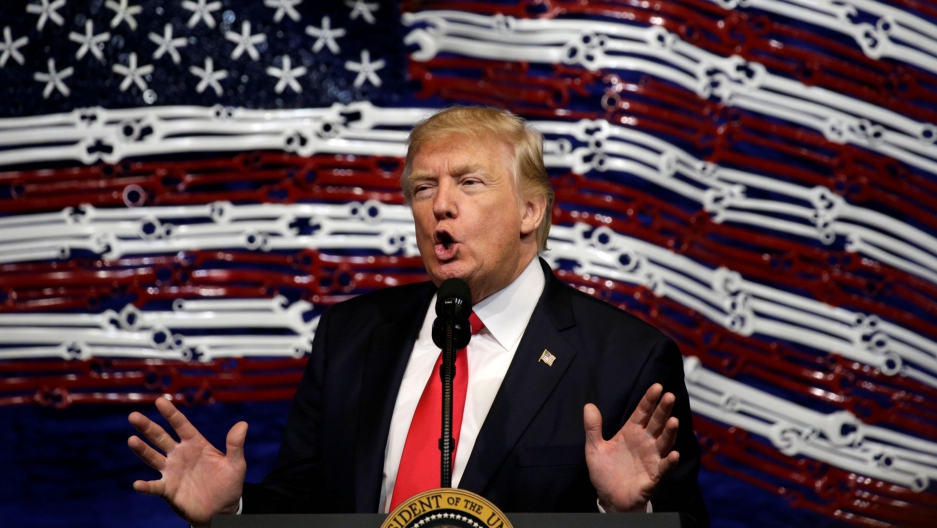 President Donald Trump speaks before signing an executive order directing federal agencies to recommend changes to a temporary visa program used to bring foreign workers to the United States to fill high-skilled jobs during a visit to the world headquarters of Snap-On Inc, a tool manufacturer, in Kenosha, Wisconsin, on April 18, 2017.

President Donald Trump, mulling over his first 100 days in office — a milestone he reached on Saturday — said in a recent interview that he sort of wants his old life back.

These days, his time is not his own, he doesn’t have much privacy with Secret Service around him 24/7 and the job is harder than he'd imagined, he told Reuters.

Nevertheless, in an address Friday, the commander in chief described his first 100 days in the White House as "just about the most successful" ever.

Of course, that's up for debate, and there's plenty of media coverage about his setbacks and accomplishments over the last several months. Not that it's been an easy few months for the press: This past week, The New York Times' correspondents reflected on the challenge of covering the White House, Philip H. Gordon warned in Foreign Affairs about the impact of Trump's erratic style, and CNN compiled all of its Trump-related alerts since day one.

Back in January, we at PRI and The Takeaway decided to mark the president's first 100 days by asking him 100 questions. (Check out the entire list of questions here.) Since Trump is a prolific tweeter, we sent our inquiries to @realDonaldTrump on Twitter, and invited our audience to join in with the hashtag #100Days100Qs.

Some people tweeted their own questions to the president, and we had our "suggestion box" open. In fact, we received some 326 different questions from across the web. Our own queries for Trump ran the gamut, touching on everything from national security issues to women's rights to whether the president might bring man's best friend to 1600 Pennsylvania Avenue, like so many before him.

Some of those questions resonated with our readers. Like Dane Hofbauer of Seattle, who has tweeted 99 questions to the president (a mix of ours and his own). He told us he learned about #100Days100Qs on the radio a few days before it launched, and the project sounded doable for him. Before this, he'd just been a casual Twitter user.

That said, it wasn't easy. "Sometimes it felt overwhelming to try to express my concerns in 140-characters. I'd often go a few days in a row without tweeting, but then 'catch-up' by tweeting to @realDonaldTrump a few times in a given day," Hofbauer said.

"I appreciate feeling like I'm participating in the social discussion and evaluation of our president. In fact, while my 'twitter-activism' dramatically increased since Trump took office, so did my 'real life' activism efforts. My wife and I have marched loudly through the streets of Seattle, listened quietly to inspirational and educational speakers at local centers, and reflected inwardly at candlelight vigils in parks. And we plan to do more."

Above all, the project got him to pay close attention to "local, national, and world politics. You never know what will spark a movement, but this campaign certainly stirred something inside of me. This is just the beginning."

We learned a lot, too — about tracking the president's work, the issues that are on people's minds, the need for diligence on a wide range of issues and new ways to bring our readers into the fold.

Although we didn't hear back from Trump on Twitter, there are some queries that got answered along the way by the president's actions. For example, early on, we asked about access to information on immigration and deportations. Then a federal immigration report was pulled, meaning we know even less than we did before. (And we have more reporting on the immigration data we're not getting anymore under Trump.)

And, what did it mean when Trump said that he was putting Iran "on notice"? The answer is, it's complicated. Early on, we wondered if Trump supported keeping Syrian President Bashar al-Assad in power. Then, on April 6, Trump dropped bombs on regime targets in Syria. In the wake of that, the answer became evident: Secretary of State Rex Tillerson then said he could see "no role" for Assad in governing the Syrian people.

But there's a lot we still don't know.

Our #100Days100Qs project runs a few days past the president’s official 100th day — through Tuesday this coming week. We're not sure what's in store with the former reality TV star at the helm for the next 1,361 days, but we're committed to keeping an eye out — and doing our homework. We hope you will, too.

If you have a question you think we should ask the president, tweet it to us — we’re online @PRI, @PRITheWorld and @TheTakeaway.

Our top 10 most popular questions since Trump entered office had much to do with immigration issues and foreign policy. (See more of our immigration reporting under our Global Nation vertical). However, questions about Trump's historically low approval rating and the White House Easter egg roll (an elaborate production) show there's concern about presidential duties, in general.

Here are our most popular #100Days100Qs posts on PRI.org:

1. President Trump, is immigration reform on your legislative agenda? Question 68 by Angilee Shah

2. President Trump, do you have a red line when it comes to North Korea? Question 70 by Timothy McGrath

3. President Trump, why are you cutting rail service to rural towns that helped get you elected? Question 77 by Allison Herrera

4. President Trump, are you worried about this year's Easter Egg Roll — one of the largest public White House events? Question 82 by Allison Herrera 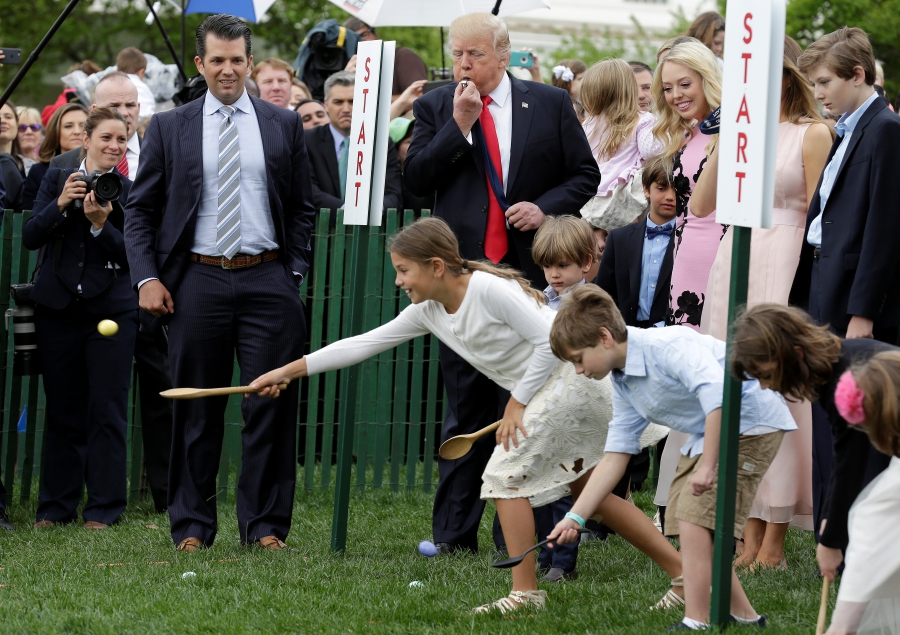 6. President Trump, are you concerned about your historically low approval ratings? Question 76 by Evan Taparata

7. President Trump, what evidence do you have of contact between the Clinton campaign and Russian officials? Question 58 by Allison Herrera

8. President Trump, why are you shrinking the EPA when Defense Secretary Mattis believes climate change is a national security threat? Question 54 by T.J. Raphael of The Takeaway

9. @realdonaldtrump: In addition to undocumented immigrants, are you prioritizing deportation of lawful US residents? #100Days100Qs Question 7 by Angilee Shah

10. @realDonaldTrump What are you going to do with DAPA and DACA? #100Days100Qs Question 32 by T.J. Raphael and Oliver Lazarus of The Takeaway

Some of our editors and other staffers weigh in, below:

Timothy McGrath, digital editor: Most of the questions I asked Trump had to do with foreign policy, conflict and national security. And I've got to say — after 100 days, I don't have a much clearer sense of his worldview and global ambitions than I did before his inauguration. For example, I asked him whether he has clear plans for US policy in Afghanistan, Syria and North Korea. Since then, he's dropped the "mother of all bombs" in Afghanistan, struck a Syrian regime air base with 59 Tomahawk missiles and responded to Kim Jong-un's constant bluster with repeated, vague warnings. But what's the larger strategy at work here? Does Trump want to expand US military operations in Afghanistan? Is he interested in more direct engagement against Syrian President Bashar al-Assad? Will he strike North Korea? He hasn't said. Nobody knows. I guess we'll wait and see.

Angilee Shah, digital editor, PRI's Global Nation: It's been a great challenge for us, on the immigration beat in Global Nation, to get as much information as we can to begin to answer the questions that are on the minds of so many people following this topic. After we asked about public information on immigration detention and deportation, we did get part of an answer from the Trump administration. But the story quickly changed, as the reports and data the Department of Homeland Security is releasing shifted once more. Having all of these questions has given us a good challenge for our reporting going forward.

Allison Herrera, social media editor: I learned more about national and international issues. I learned a lot about what our audience cares about — accountability and transparency. That was very apparent in the responses we got from our "supertweeters." The other thing I learned is that I think this could be a very effective public engagement tool — if managed properly.

Evan Taparata, social media editor: The fact that we asked so many questions across so many topics and never received a response from Trump, to my mind, speaks to the importance of journalism and the need to keep pressing this administration — and all presidential administrations, really — to be accountable to the public. We tried to cover a wide range of questions with this campaign, so it was always gratifying to check in on our hashtag, #100Days100Qs, and see the range of questions that our audience members also wanted to ask Trump. And speaking of our audience — a big shoutout to Twitter users Amy Catania, @ABCatan, and Dane Hofbauer, @Dane206, for raising several questions, some of which made their way into our coverage.

Isis Madrid, social media editor, PRI's Across Women's Lives: My favorite question was definitely the White House dog one! The White House Dogs exhibit at the Newseum was a highlight for me. Haha. It’s been a hell of a first 100 days for gender equality activists watching the Trump White House. I think that our questions about women’s rights are important, prescient and in need of some answers. Let’s keep asking them!

Victoria Farmer, senior manager, audience development: I was in charge of collecting original user questions, and I was blown away by the deep thoughts from people who really engaged with the project and gave us lots of good questions, especially @dane206, @ABCatan, and @jjredbone.

In and around cyberspace

It's been tough to get @realDonaldTrump's attention, but we did get lots of question ideas from social media. Here's a shoutout to some of those who've helped us keep the conversation going, below. We appreciate you!

.@realDonaldTrump I thought @GOP was moving on & #ACA would remain intact. Would you want the #AHCA for your family? #100days100Qs @PRI https://t.co/w3RAS1Z4uu

Can @realDonaldTrump name one piece of "Rigorous science" that has informed his administration's policy to date? #100days100qs

@realDonaldTrump, what does the #statueofliberty mean to you? #100days100qs #NoBanNoWall

@PRI @TheTakeaway Question to Trump: How are any of your policies helping our children?#100Days100Qs

.@POTUS , did you know that your slashed #ForeignAid budget undermines U.S. diplomacy & is an affront to #HumanRights? #100Days100Qs

.@realDonaldTrump -Pres.Trump, what are your plans for the Office of Global Women's Issues? It plays vital role @GenderAtState #100Days100Qs

Like Dane Hofbauer said, this is just the beginning.