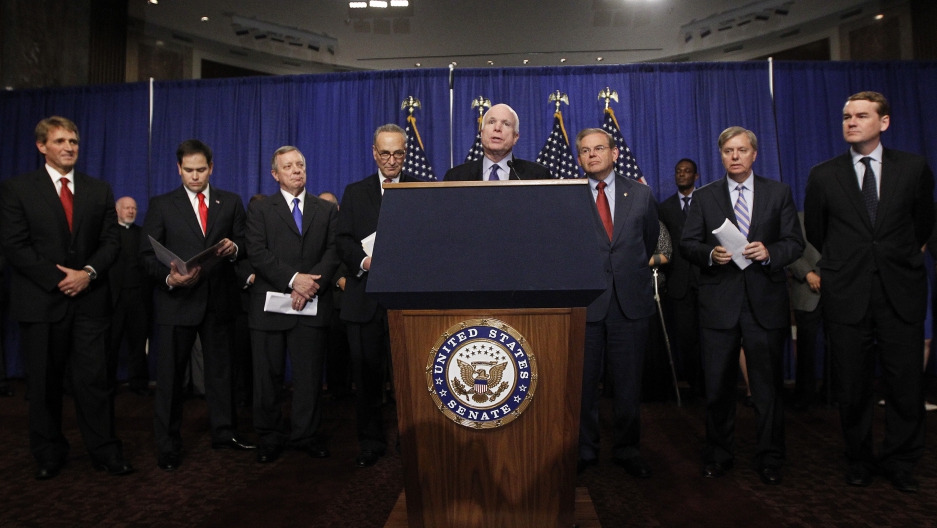 The "Gang of Eight" during a news briefing on Capitol Hill in 2013. They created bipartisan and comprehensive legislation to overhaul the immigration system, which passed the Senate but was never called to a vote in the House. The eight senators, left to right, are Jeff Flake (R-AZ), Marco Rubio (R-FL), Dick Durbin (D-IL), Chuck Schumer (D-NY), John McCain (R-AZ), Bob Menendez (D-NJ), Lindsey Graham (R-SC) and Michael Bennet (D-CO).

#68. @realDonaldTrump, is immigration reform on your legislative agenda? #100Days100Qs

It was clear through the campaign and in the first weeks of Donald Trump's presidency that a major priority of the administration would be to enforce existing immigration laws to remove undocumented immigrants from the US.

But we know it's not just illegal immigration on the Trump administration's policy plate. In his address to Congress at the end of February, Trump talked about changing how legal immigration works. What's less clear is what reform to the immigration system might look like, and how much of a priority it is for the White House.

Most immigrants are admitted to the US as permanent residents on the basis of family unification. The Migration Policy Institute reports that in 2015, of more than 1 million new permanent residents, also known as green-card holders, over 60 percent came to the US after being sponsored by family members, mostly immediate family. The US caps the number of immigrants who can enter the country this way based on national origin.

Trump has, instead, called for a system of immigration that focuses on high-skilled workers.

"Switching away from this current system of lower-skilled immigration, and instead adopting a merit-based system, will have many benefits: It will save countless dollars, raise workers’ wages, and help struggling families — including immigrant families — enter the middle class," Trump said. "I believe that real and positive immigration reform is possible, as long as we focus on the following goals: to improve jobs and wages for Americans, to strengthen our nation’s security, and to restore respect for our laws."

A March CNN/ORC poll found that two-thirds of Americans support some form of legalization for undocumented immigrants who have jobs. An even higher percentage support a pathway for people who have jobs, speak English and pay all their taxes. (Here's a PDF of the poll's findings.)

Comprehensive immigration reform was attempted by the Bush administration and several times during the Obama administration, including a bipartisan effort that passed the Senate in 2013 but never received a vote in the House. That bill, the "Border Security, Economic Opportunity, and Immigration Modernization Act of 2013," proposed to add border agents and require all employers to verify their employees' authorization to work, while creating a talent-based immigration system and a path to citizenship for many undocumented immigrants.

The US Conference of Mayors, representing over 1,400 cities, adopted a resolution in January "calling on Congress to fix our broken immigration system and immediately begin working toward the enactment of comprehensive immigration reform legislation." (PDF)

Many employers also say they need reform in order to fill open positions with people who are legally authorized to work in the US. This was the position of fast food CEO Andrew Puzder, Trump's first pick for labor secretary who removed himself from consideration amidst scandal.

Senators David Perdue and Tom Cotton told Politico that the president supported their bill to reduce the numbers of legal immigrants admitted to the country. He asked, they said, for a broader bill to include changes to work visas.

We would like to know if the White House can confirm this report. And, more generally, our question for Trump is: Is immigration reform among your legislative priorities and what are some of the specific changes that you would like to see happen? Click here to tweet this question to the president. Here are some other immigration-related questions we've asked.