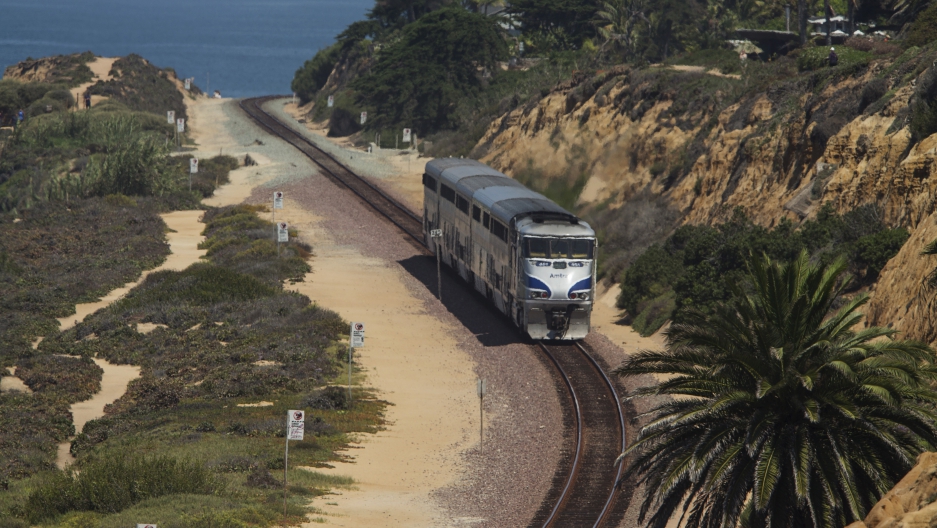 An Amtrak commuter train makes its way along the coastline in Del Mar, California, on Aug. 19, 2015.

#77. @realDonaldTrump, why are you cutting rail service to rural towns that helped get you elected? #100Days100Qs

“It’s ironic that President Trump’s first budget proposal undermines the very communities whose economic hardship and sense of isolation from the rest of the country helped propel him into office,” said the National Association of Rail Passengers President Jim Mathews in a recent article published by Mass Transit.

In his 2018 budget proposal, Donald Trump eliminates funding for mass transit infrastructure, Amtrak transit — the only national network service to 23 states — commuter rail service and air service to rural towns. Industry leaders say that not only will this be a burden particularly on rural Americans, but it will also cost those same communities manufacturing jobs — you know, the ones that Trump really wants to bring back.

All total, 220 cities would lose access to train service connecting them to nearby towns, according to the National Association of Railroad Passengers.

"These hard working, small town Americans don’t have airports or Uber to turn to; they depend on these trains," Matthews said in the same article.

That's not all. The proposed budget cuts, amounting to $2.4 billion, threaten numerous transit projects and many jobs along with it. For example, Trump’s new Transportation Secretary Elaine Chao suspended a project that would allow California to move forward with a commuter rail electrification project. Caltrain, the agency in charge of the project, estimates that 9,600 jobs will be lost. And, in Salt Lake City, the suspended Caltrain project threatens rail car manufacturing plans and 550 jobs.

Among the cities to lost Amtrak service are the following: Alderson, West Virginia, Alliance, Ohio and Connellsville, Pennsylvania — located in some of the same counties where Trump carried the vote back in November. Other cities losing service under this plan: Albuquerque, New Mexico, Austin, Texas and Minneapolis.

"What’s more, these proposed cuts come as President Trump continues to promise that our tax dollars will be invested in rebuilding America's infrastructure,” Matthews said.

So, why is the president putting this portion of America’s infrastructure on the chopping block?