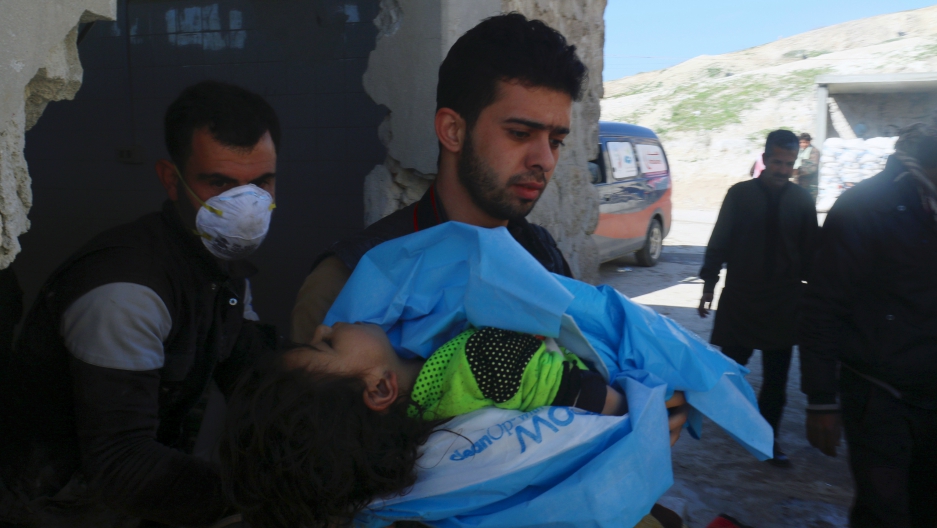 A man carries the body of a dead child, after what rescue workers described as a suspected gas attack in the town of Khan Sheikhoun in rebel-held Idlib, Syria, April 4, 2017.

The US launched its first direct strike on the Syrian regime Friday morning local time after a suspected Damascus-ordered chemical attack killed at least 70 people Tuesday in the Syrian town of Khan Sheikhoun.

The attack in Khan Sheikhoun inspired US President Donald Trump to bomb a Syrian airfield.

Related: Syrians who have lived under Assad’s bombs celebrate US missile strike

But will it change his thinking about Syrian refugees?

Before this week, Trump's approach to Syria boiled down to a few policies and talking points: Defeat ISIS. Ban Syrian refugees from entering the United States. Obama failed and was weak — he drew a red line and then did nothing when Syria crossed it. Syrian President Bashar al-Assad is a bad guy, but, hey, there are lots of bad guys, and if you throw him out things could get even worse.

That was about it. Trump didn't seem particularly interested in tipping the balance of power in a civil war that has lasted six years; killed hundreds of thousands of Syrians; driven millions of Syrians from their homes; and evolved from a revolt against an authoritarian leader into a complex armed conflict involving multiple parties, state and nonstate actors, terror groups, proxy forces and foreign governments, including a US-led coalition, Russia and Iran.

He was, however, very interested in preventing Syrian refugees from resettling in the United States. In December 2015, Trump called for a "total and complete shutdown" of all Muslims traveling to the US. That would have included the vast majority of Syrian refugees. As president, he's signed two executive orders temporarily banning all refugees, including Syrians, from entering the country for 120 days. Both orders have been blocked in federal court. His administration is appealing.

Trump rose to power on a promise that he'd put "America first." That means jobs at home, not foreign wars. It means caring for veterans and securing borders and not accepting refugees from conflict zones.

And then Friday morning, on Trump's orders, two US Navy destroyers in the Mediterranean Sea fired 59 Tomahawk missiles at a Syrian air base in Homs.

Trump says it was the images showing the aftermath of the Khan Sheikhoun attack — especially the killing of children.

"When you kill innocent children, innocent babies — babies, little babies — with a chemical gas that is so lethal," Trump said during a joint press conference Wednesday with the king of Jordan, "that crosses many, many lines, beyond a red line. Many, many lines."

"And I will tell you, that attack on children yesterday had a big impact on me," he added. "That was a horrible, horrible thing. And I’ve been watching it and seeing it, and it doesn’t get any worse than that."

"And I will tell you," Trump said. "It’s already happened that my attitude toward Syria and Assad has changed very much."

When he announced the airstrikes during a Thursday night press conference from Mar-a-Lago, he emphasized this point again.

"It was a slow and brutal death for so many, even beautiful babies were cruelly murdered in this very barbaric attack," he said. "No child of God should ever suffer such horror."

But even as Trump was so moved by the suffering of Syrian children that he was willing to launch a military attack without congressional approval, his administration's lawyers are actively working to keep Syrian children from finding refuge in the United States.

In February 2016, Trump told a roomful of potential voters in New Hampshire that he was willing to look into the eyes of Syrian children and tell them why they couldn't come to America.