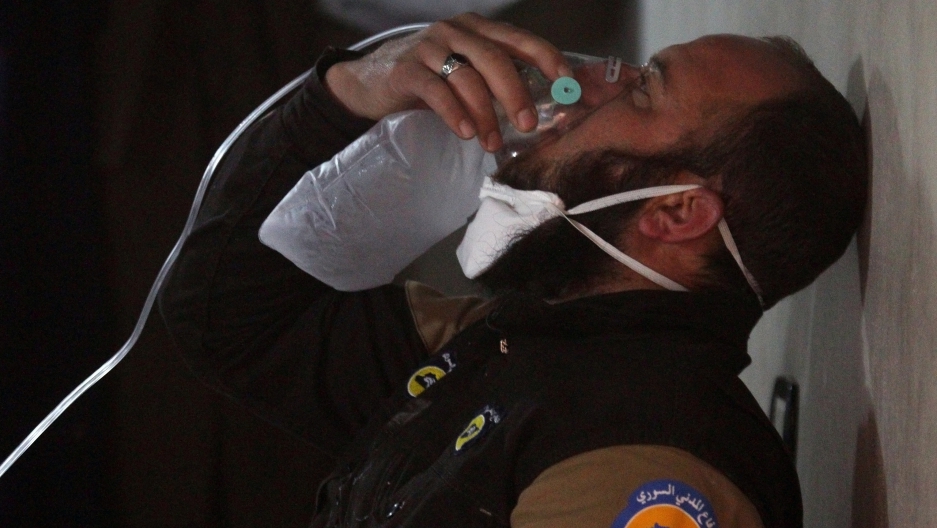 A Syrian Civil Defense member uses an oxygen mask after a suspected gas attack in the town of Khan Sheikhoun in rebel-held Idlib, Syria, April 4, 2017.

A suspected chemical gas attack on the rebel-held Syrian town of Khan Sheikhoun "cannot be ignored by the civilized world."

So says the White House.

But it's unclear whether the early morning assault in the Syrian province of Idlib on Tuesday will move the global community and shake up the Syrian peace talks the United Nations is hosting in Geneva.

The attack, among the worst in the country's six-year civil war, reportedly left dozens dead and many more choking in the streets.

Syrian journalist Hadi Abdallah rushed to the town after the incident.

"Now I have side effects of inhaling toxic gases. I cannot breathe well, I cannot see well and I have headache," Abdallah says.

Eliot Higgins, the founder of the online investigative network Bellingcat, has been sorting through the dozens of videos citizens and activists have been sending out recording the aftermath of the Khan Sheikhoun attack on the local civilians.

"They're convulsing, they're foaming at the mouth, they've got pinpoint pupils. That's not something you can fake," Higgins says. "It's really quite shocking footage."

Images that gruesome do not tend to go viral.

"You find people shying away from sharing those because they think it's too much," he says.

"We've seen over the past four years the repeated chemical attacks, the repeated condemnations from international bodies, and nothing changes. We've seen endless chlorine attacks, we've seen sarin attacks repeatedly and as soon as it gets to the UN Security Council Russia puts its hands up and vetoes any action."

Although many are blaming Syrian President Bashar al-Assad for the attack, Fares Shehabi, a government supporter and member of the Syrian parliament, says that's nonsense.

"We are used to these fabrications and fake news for six years now. We don't need to use chemical attacks. Actually we gave up our chemical arsenal two or three years ago," Shehabi says, referring to an agreement, brokered by the US and Russia in 2013 that required Syria to turn over its chemical weapons. "We have enough destruction power to [win] a fight at any place we attack. We don't need to use chemical weapons."