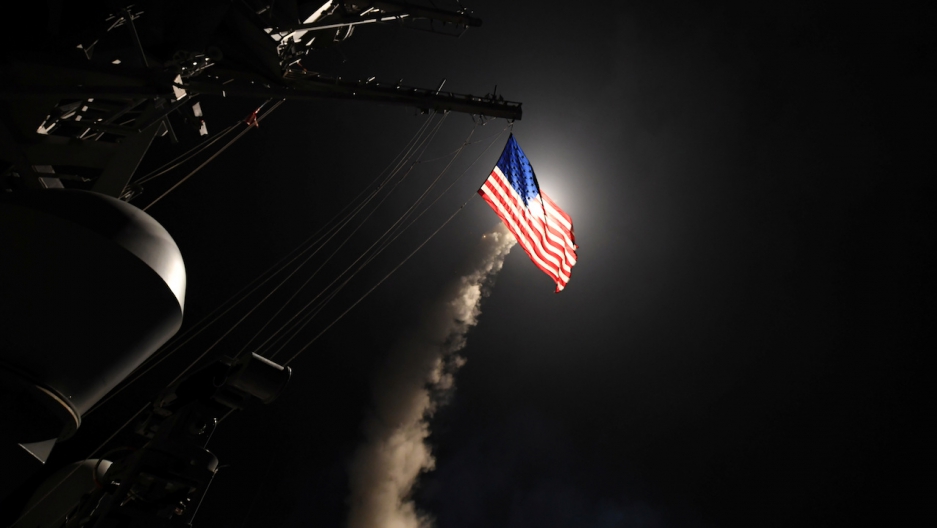 US Navy guided-missile destroyer USS Porter (DDG 78) conducts strike operations while in the Mediterranean Sea, which US Defense Department said was a part of cruise missile strike against Syria on April 7, 2017.

For the past six years, civilians living in areas of Syria that were the frequent target of airstrikes by Bashar al-Assad’s jets have wondered in exasperation why the international community did not respond.

But on Friday morning local time, after the US launched its first direct and deliberate strike on Assad’s forces in retaliation for a chemical weapons attack on the Syrian town of Khan Sheikhoun, there was a sense of elation in rebel-held areas of the country.

“It was the happiest news that I’ve heard in my life,” said Ahmad, a resident of Khan Sheikhoun, a witness to the apparent chemical attack on Tuesday who lost friends and neighbors. His name has been changed to protect his identity.

At 3:40 a.m. on Friday, a total of 59 Tomahawk missiles were fired from two US destroyers at the Shayrat airfield in Homs, central Syria, where the Pentagon claimed planes took off to carry out the deadly strike in Khan Sheikhoun that left more than 70 people dead. 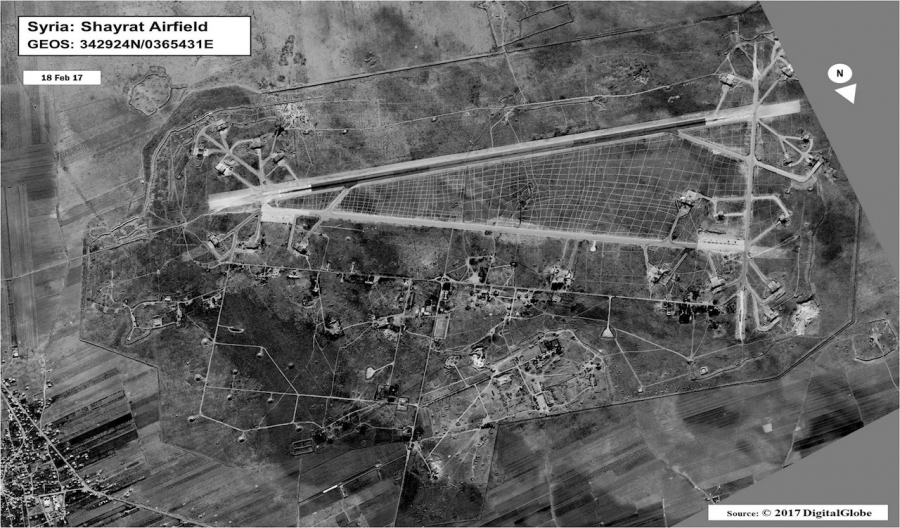 Shayrat Airfield in Homs, Syria is seen in this DigitalGlobe satellite image taken Feb. 18, 2017 and released by the US Defense Department on April 6, 2017 after announcing US forces conducted a cruise missile strike against the Syrian Air Force airfield.

The Syrian government denied carrying out any attacks in Khan Sheikhoun, while Russian officials claimed Syria bombed a rebel chemical weapons factory in the town, which poisoned the residents.

Justifying the strike, US President Donald Trump said that “years of previous attempts at changing Assad's behavior have all failed, and failed very dramatically.”

“It is in this vital national security interest of the United States to prevent and deter the spread and use of deadly chemical weapons,” he added.

The strike marks a significant escalation of US involvement in Syria, raising the possibility of direct confrontation between the US military and the Syrian government and its allies Russia and Iran. The US strikes Syria regularly to target ISIS, but this is the first time it has attacked the Assad regime.

The Syrian government condemned the US strike as an “aggression,” and its state news agency said the attack killed nine civilians in areas surrounding the base. Moscow and Iran also criticized the strike. The Pentagon, meanwhile, said it “severely damaged or destroyed Syrian aircraft and support infrastructure and equipment.” It was later reported that about 20 Syrian planes were destroyed.

The swift military action was taken without congressional approval and stands in contrast to Trump’s earlier positions and campaign promises regarding Syria. 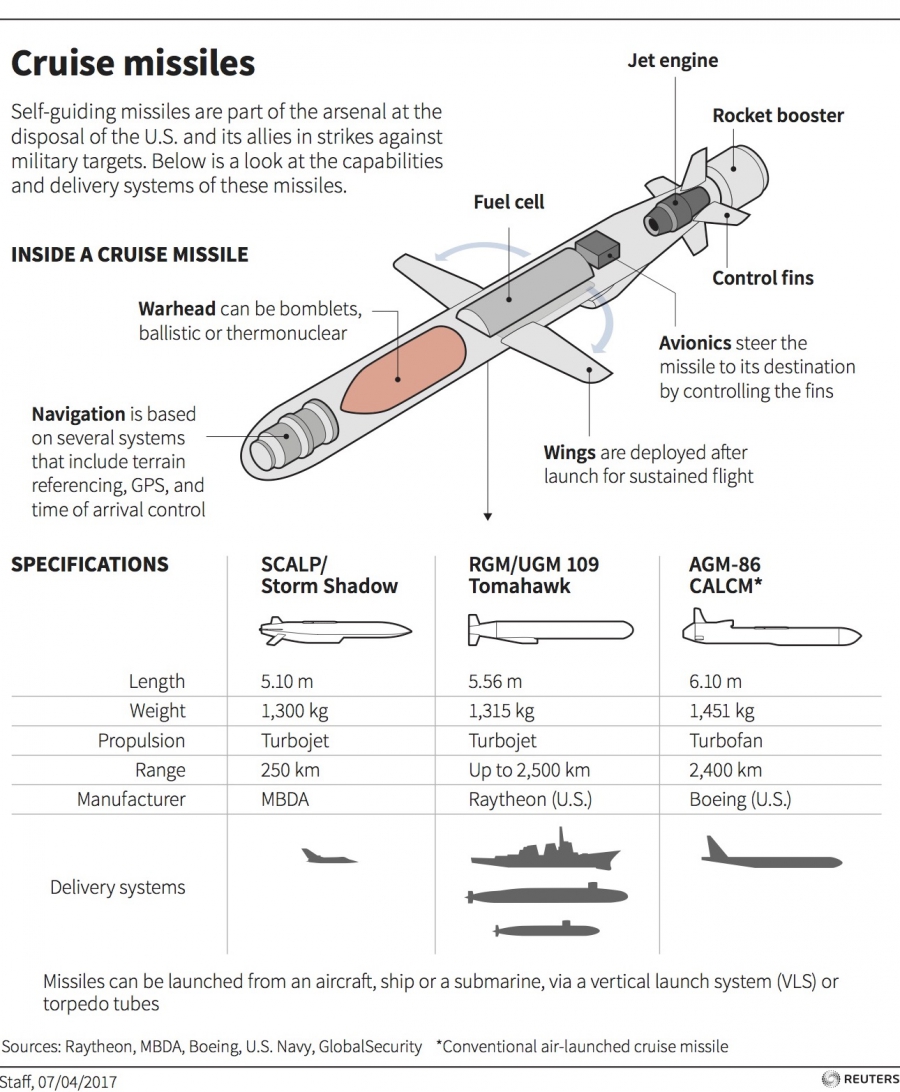 Cruise missiles used by the US and its allies.

Nevertheless, many Syrians expressed happiness that their tormentor — Assad — was on the receiving end of US missiles for the first time.

“When you walk in Khan Sheikhoun you can see smiles on people’s faces when they hear there was an attack on the criminal Bashar al-Assad,” said Ahmad.

Related: Lack of political will stands in the way of bringing Assad to court

Men, women and children were among the dozens killed in Khan Sheikhoun on Tuesday. Turkish officials who performed autopsies on the bodies said Thursday the victims had been exposed to Sarin, a banned nerve agent.

Sarin was also the culprit in the deadliest chemical weapons attack of the Syrian war, when more than 1,000 people were killed on the outskirts of Damascus, which the US blamed on the Syrian army.

That incident came after then-US President Barack Obama had drawn his infamous “red line” — threatening military action if the Syrian government used chemical weapons against its own people. When that happened, he sought congressional approval for a military strike against Syria, which he did not receive.

Elsewhere in rebel-held northern Syria, there were celebrations. Wissam Zarqa, an English teacher who was displaced from Aleppo when the Syrian army regained control of the city in December, said he welcomed the news.

“Finally, the international community is reacting in the right way, targeting a military target that is causing death to thousands of civilians,” he said.

Related: If Assad stayed, could Syria ever rebuild from war?

“Over the past six years we’ve grown disappointed with the international community, nothing, just watching. This is first time the real cause of all the trouble in Syria is being targeted.”

There was a sense of caution among others — a feeling that the strikes won’t achieve much at all.

“I want to tell you how people are happy to take some revenge, some partial revenge against Assad. But for me … I cannot be so optimistic about what is coming, because I expect a reaction from Assad towards his people. He will be angry and will make more bombs against us,” said Abdulkafi al-Hamdo, also an English teacher displaced from Aleppo to Idlib.

Hamdo stayed in Aleppo until the Syrian army captured the last areas of the city in a brutal campaign backed by Russian airstrikes and support. He says the US strikes appear to send the message that conventional weapons are fair game.

“What does it mean that when Assad used upon our heads, upon our children, amounts of weapons that maybe haven’t been used since World War II, the international community was silent? We were facing hell [in Aleppo].”

“I just read today that America said these strikes are to tell Assad not to use chemical weapons again. This means he’s allowed to use any other weapons on our heads and our children’s heads,” he adds. “I don’t understand this.”

Related: What do refugee parents tell their children about Syria? (PHOTOS)

Outside of Syria, too, Syrians have their attention locked on events at home.

Kassem Eid was on the receiving end of the 2013 attack — he barely made it out with his life. He now lives in Germany, having escaped the country in 2014.

“When I saw the images [of Khan Sheikhoun] I was outraged and angry. To see images of little children choking. I felt disgusted by humanity,” he said, speaking from Germany, where he now lives.

But there is a sense of optimism among Syrians opposed to Assad, he said.

“For the very first time, since the beginning of the revolution, we never felt as much hope as we felt right now. Not just me — I’m talking to my friends and others who witnessed the chemical attack in 2013. We are all overwhelmed,” he said.

“We feel that someone actually cares for the very first time.”