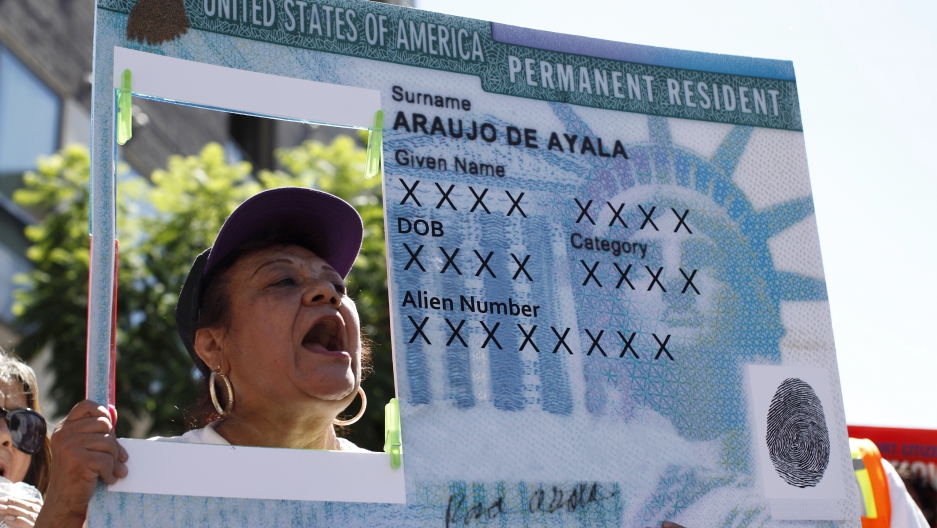 A woman holds a replica green card sign during a protest march to demand immigration reform in Hollywood, Los Angeles, California, on October 5, 2013. President Donald Trump issues executive orders this week that could curb the rights of legal permanent residents, people to came to the US with proper documentation.

Mr. President, can you clarify what you mean in your executive orders on immigration when you direct the Department of Homeland Security to prioritize the deportations of certain classes of people?

In one of the orders that Donald Trump signed last week, he set priorities for whom immigration officials should put at the top of their list for deportation. As expected, undocumented immigrants who have committed crimes are high on the list, as they were under President Barack Obama. But some of the language in Trump's new order is extremely broad, and would include legal permanent residents as well as people agents simply deem to be threats. Here's the section, in particular that has raised questions:

(a)  Have been convicted of any criminal offense;

(b)  Have been charged with any criminal offense, where such charge has not been resolved;

(c)  Have committed acts that constitute a chargeable criminal offense;

(d)  Have engaged in fraud or willful misrepresentation in connection with any official matter or application before a governmental agency;

(e)  Have abused any program related to receipt of public benefits;

(f)  Are subject to a final order of removal, but who have not complied with their legal obligation to depart the United States; or

(g)  In the judgment of an immigration officer, otherwise pose a risk to public safety or national security.

We know that a legal resident, no matter how long they have lived in the US, becomes a "removable alien" when they are convicted of a crime. Laws passed in 1996 significantly expanded the range of deportable offenses, to include misdemeanors such as marijuana possession or writing a bad check, while restricting judges’ discretion. However, what is unclear about this "Enhancing Public Safety" order is whether the Trump administration intends for the federal immigration agency's priorities to be to seek out and deport legal permanent residents who have committed low-level crimes.

We know this happened during the Obama administration — see the stories of Arnold Giammarco, Maria Sanchez and the story of a man from Northern Ireland who was deported 11 years after getting into a bar fight — however, is it Trump's intention to aggressively pursue these immigrants who are here legally?

We are already hearing reports that Border Patrol is scrutinizing legal permanent residents at the borders. Federal courts have supended the Trump administration's effort to deport people who have arrived to the US with valid travel documents, which was part of the order to ban refugees and people from certain Muslim-majority countries that Trump signed on Friday. That order has not yet been published on the White House website, but was made available by The New York Times.

It hasn't held press briefings on orders that would affect millions.

César Cuauhtémoc García Hernández, an immigration and criminal law professor at the University of Denver, points out that one part of the set of priorities in Trump's Wednesday order is in conflict with existing laws. "Green card holders [another term for legal permanent residents] cannot be deported solely on the basis of a criminal charge without a conviction," he explains.

Yet this list of priorities says that anyone — even if they have not been formally charged with a crime — can be prioritized for deportation. It also grants immigration officials broad leeway to make judgements on who can be deported.

"The notion that we can even understand this as setting forth a series of enforcement priorities is somewhat akin to 'alternative facts,'" says Anil Kalhan, who specializes in immigration law at Drexel University in Philadelphia. "I read that [Section 5(g)] as an invitation for immigration officers around the country to exercise their authority any way they want."

The order also calls for an expansion of detention facilities, which García Hernández says is a way to make people who have a legal basis to stay in the US give up those rights. "Most people in detention are not able to get an attorney," including legal permanent residents, he says. "If you don't have an attorney by your side you may not know to argue that you haven't been convicted of a crime and are not deportable."

"Being in detention is the worst thing you can possibly think of," he says. Even if there is a valid legal argument, "sometimes clients say, 'All I care about is getting out of here.'" Then they sign documents accepting their own deportations.

The Migration Policy Institute reports that there are almost 13 million legal permenent residents in the US. Most were admitted to join family already here, while others were granted papers to work or to escape violence. The US is home, where they have families, properties and livelihoods for these people who applied to come to this country to stay.

So our question today is, are you, Mr. Trump, prioritizing the deportation of lawful residents? Are you giving immigration agents free rein to choose who they want to pursue for deportation? Do you have priorities for who will be deported beyond the broad strokes of this executive order?

Over President Donald Trump's roughly first 100 days, we are asking him questions that our audience wants answers to. Join the project by tweeting this question to @realDonaldTrump with the hashtag #100Days100Qs. Check out question #4, which was also about deportation and detention of immigrants. See all of the questions at pri.org/100questions.