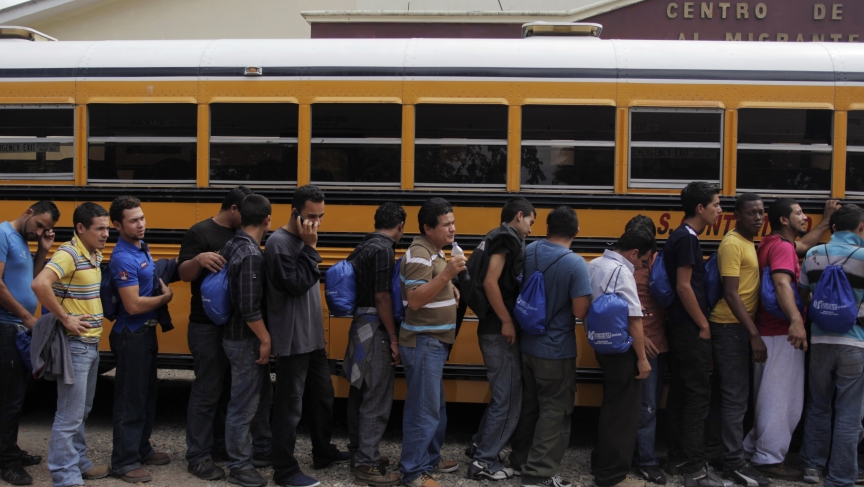 Deportees line up outside a bus at the Care Center for Returning Migrants (CAMR) after arriving on an immigration flight from the U.S., at the international airport in San Pedro Sula November 20, 2013. According to the General Directorate of Migration and Immigration, 32,240 Hondurans were deported by air from the U.S. in 2012.

For Prerna Lal, how deportation data is parsed and explained is personal. She was once an undocumented immigrant herself, and for her, the deportation statistics represent people’s lives.

“There’s political motivations behind the numbers game,” says Lal. “We can cut the numbers either way, but the fact remains that the actual number of deportations is 2 million. These are people who are hard-working members of our community — mothers, brothers, members of our family.”

#SCOMM report reveals that 88% of all deportees did not commit any serious crimes, by @wwwicegov's own definition http://t.co/ldP1Uv9J5F

Lal is a member of the newly formed Not1More Blue Ribbon Commission, a project to represent the interests of people affected by deportation and detention. And for the record, she says President Barack Obama is the “deporter-in-chief,” a label immigration activists have applied to him recently.

During the Obama administration, there have been an estimated 2 million deportations, about 400,000 each year from 2009 to 2012. The New York Times, using a Freedom of Information Act request, obtained data that shows that about two-thirds of these cases involved people with minor or no criminal records.

Allison Brownell Tirres, an immigration law scholar and historian at DePaul University, says the huge increase is largely the result of laws passed in 1996, well before Obama took office. These laws significantly expanded the range of deportable offenses, to include misdemeanors such as marijuana possession or writing a bad check, while restricting judges’ discretion.

“We’ve tied the hands of judges in terms of being able to provide deportation relief. You could have someone who’s been here 30 years, has good moral character and once would have been granted deportation relief and a path to legalization. Now we don’t have those legal mechanisms any more,” Tirres says.

The two laws, the Antiterrorism and Effective Death Penalty Act (AEDPA) and Illegal Immigration and Immigrant Responsibility Act (IIRIRA), were part of a “law and order” agenda, says Doris Meissner, former commissioner of the US Immigration and Naturalization Service during the Clinton administration. At the time, she says, the immigration system was perceived as full of loopholes, “a lawyer’s playground.”

“The Clinton administration objected to many elements of the law, but at the end of the day the President signed the law because the administration was committed broadly to strengthening immigration enforcement,” says Meissner, now a senior fellow at the Migration Policy Institute (MPI), a nonpartisan center in Washington, DC. “This is a system that is performing as it was designed to perform going back almost 20 years, with support across the aisle.”

Deportations again increased after the 9/11 attacks, when the focus on border security “went into overdrive” because it became part of the national security response, “even though the hijackers came legally into the country,” says Meissner. Huge amounts of money were poured into enforcing immigration laws, creating both infrastructure and technology that enables the deportation rates we see today. Funding for immigration enforcement increased from $1.2 billion in 1990 to $17.7 billion in 2013, which Meissner explains in an essay she co-authored for MPI.

Because the increase in deportation rates has such deep roots, Meissner says the “deporter-in-chief” label is not fair to Obama, but “it does convey a sense of the deep disappointment and dismay. There is enormous pain out there.”

Tanya Golash-Boza, a sociologist at the University of California, Merced, and author of Immigration Nation, disagrees. She says Obama could have done more to change the Department of Homeland Security when he took office.

“The Department of Homeland Security’s mission under Janet Napolitano [then secretary of DHS] was immigration enforcement,” she says, but it did not need to be. While it is an exaggeration to say that 2 million deportations equals 2 million people deported or 2 million families separated, Golash-Boza says the scale of deportations has earned Obama the “deporter-in-chief” moniker.

While the nickname obscures the causes driving the deportation spike, there are ways the Obama administration could help to curb deportations in the short-term, says Tirres. The Immigration and Nationality Act gives the administration discretion about how to prosecute. For example, the 2012 Deferred Action for Childhood Arrivals (DACA) program gives the Department of Homeland Security the ability to prioritize what laws they enforce.

“This is not unlike the discretion that criminal prosecutors have," Tirres says. “They’re able to decide whether they’re going to bring charges at all, without much constitutional or court scrutiny.”

Ninety-six law professors, including Tirres, signed a letter to the president in May 2012 [pdf] that outlined three ways that he can curb deportations using executive authority.

Tirres adds a fourth: The Obama administration could make sure that the Department of Homeland Security is complying with the “Morton memo,” a 2011 directive to exercise discretion about which cases of undocumented immigration to pursue. According to the memo, longtime US residents, the elderly or sick, for example, “should prompt particular care and consideration.”

From Lal’s perspective, Obama should be using every bit of his executive authority, up to offering pardons. She moved to the US with her parents from the Fiji Islands before the 2000 military coup. Her parents, sponsored by her grandmother, a US citizen, waited in the backlog and got green cards 10 years later. By that time, Lal had turned 24 and "aged out" of gaining citizenship via her parents. When children turn 21 they can no longer be part of their families' bids for citzenship and must restart the petitioning process.

Lal's case was just resolved this month, after she had spent three years in deportation hearings.

“There’s potential here to provide relief for our families,” she says.