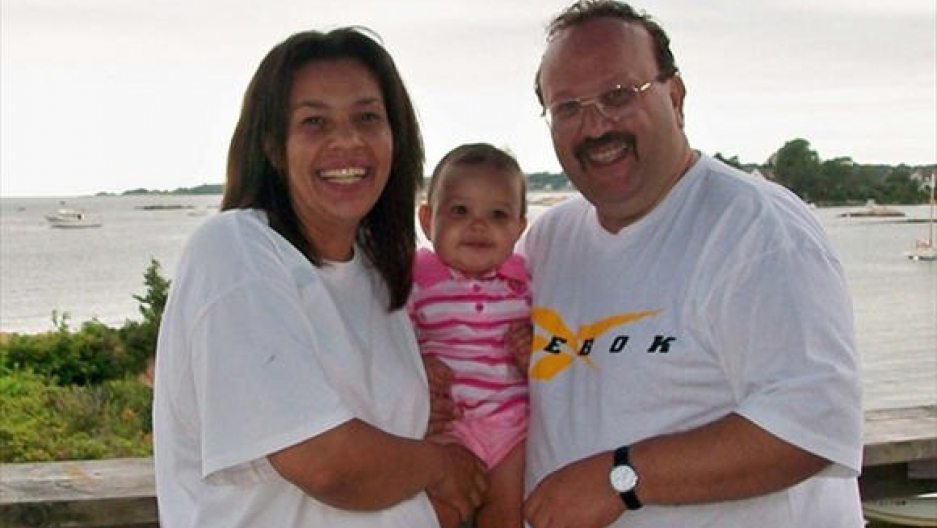 Arnold and Sharon Giammarco, with their daughter Blair.

Courtesy of the Giammarco family.

One Saturday afternoon in 2011, my wife and daughter were out, and I was on my front steps, talking on the phone with my sister. Three law enforcement cars drove up, and I told my sister, "Something must be going on." Suddenly, agents got out and started running toward me. They said, "Drop the phone. Get on your belly. Put your hands behind your back!" They handcuffed me and drove me away.

Arnold Giammarco's essay was originally published on the ACLU's website.

Even though I had been a legal permanent resident of the United States for about 50 years and served in the US Army, they told me they worked for Immigration and Customs Enforcement and they were going to deport me because of an old larceny charge for which I'd already completed my sentence.

I had gone through a rough patch in my life when my first marriage fell apart and I developed a drug problem. I deeply regretted my past, and I had also paid for it. I had served time for drug possession and related shoplifting convictions.

Since then, I had turned my life around. I got clean and moved to a new town where I didn't know anyone. I started working at McDonald's and was promoted to nighttime manager. I married my wife Sharon, who is from Connecticut. Our daughter, Blair, was born in November 2008. I spent my days taking care of Blair, so Sharon could go back to school. We didn't have everything we wanted, but we had everything we needed: food in the fridge, a used car to get us to work, our families. Life was working out for us.

Then I applied to renew my green card and I may have triggered a background check. I had no idea there was any risk — I had been in the country legally too long to worry about my immigration status.

My parents had brought me to the United States from Italy when I was 4 years old, sponsored by my grandparents, who had become U.S. citizens. My parents got factory jobs in Connecticut — my mother as a seamstress and my father as a maintenance worker. It was expensive to apply for citizenship, and my parents never did.

That seemed like a formality, I was American. My grandfather joined the US Army and fought in World War I, and I grew up hearing his stories. In 1976, I followed in his footsteps and joined the Army to serve my country and went to Germany. Later I joined the Connecticut National Guard, achieving the rank of sergeant, and then I was honorably discharged. I applied for citizenship in 1982, but my application somehow got lost in the system.

Once I was arrested, my past didn't seem to matter. I was kept in detention for 18 months with no bond hearing to decide whether I should be free. An immigration judge could have considered my military service, my rehabilitation, my family and community ties, and let me out — but no judge got that chance. Under the government's view of the immigration laws, my crime was an aggravated felony that required detention until my deportation case was decided. There was no possibility of getting out unless I won the case.

At first, four or five days a week, Sharon would drive Blair an hour and a half up from Groton, Connecticut, to visit me in Dartmouth, Massachusetts. I could only see them from behind glass. Blair was 2, and she didn't understand why I wouldn't pick her up — she would cry and reach for me. I tried to make up games: Blair would move her hand on one side of the glass, and I would follow her motions with my hand on the other side.

Soon, Sharon cut the visits to once a week, on Sundays. Gas was expensive, and the trip was hard on Blair. We kept getting our hopes up that I'd be released, then we'd get disappointed again. The legal battle had drained our "piggy bank" of a few thousand dollars we'd been saving for Blair to go to college, and my parents' pension fund. It was devastating to see my family struggle, emotionally and financially.

For me, being locked up changed the course of my life. I worried I was wasting my family's energy and money. Eventually, rather than staying on to fight my case from behind bars, I accepted deportation to Italy, a country where I barely speak the language.

Now I'm living in a central Italian town called Campo Di Fano. It's where I was born, but it's not my home. My cousins here don't acknowledge me because they think I must have done something horrible to be deported. They say, "You can't just get deported for addiction and petty crimes." I say, "Well, I did."

I try to Skype with Blair twice a day, when she wakes up in the morning and after school. I help her with her homework, like I would if I was there. She'll set up the iPhone on the dresser and do a dance routine for me.

All I want is to go home and take care of her and Sharon — and I hope that still might be possible. After I left for Italy, a district court judge ruled that my naturalization petition, which had gotten lost in the system years ago, remains pending. Officials could still decide to approve my application.

A bond hearing could have made the difference for me. A judge might have allowed me to go home, to my family, where I'm needed most. That would have given me hope to continue to fight for my right to stay with them in my country.

On Wednesday, lawyers from the ACLU are arguing before the Supreme Court that the federal government should not lock people like me up, for months or years, without the due process of a hearing to decide if imprisonment is even justified. Thousands of lives depend on this. What happened to me shouldn't happen to anyone in America.

This commentary was originally published on the ACLU's website. The ACLU is representing immigrants in a class-action suit that argues those in detention should have a right to bail hearings.