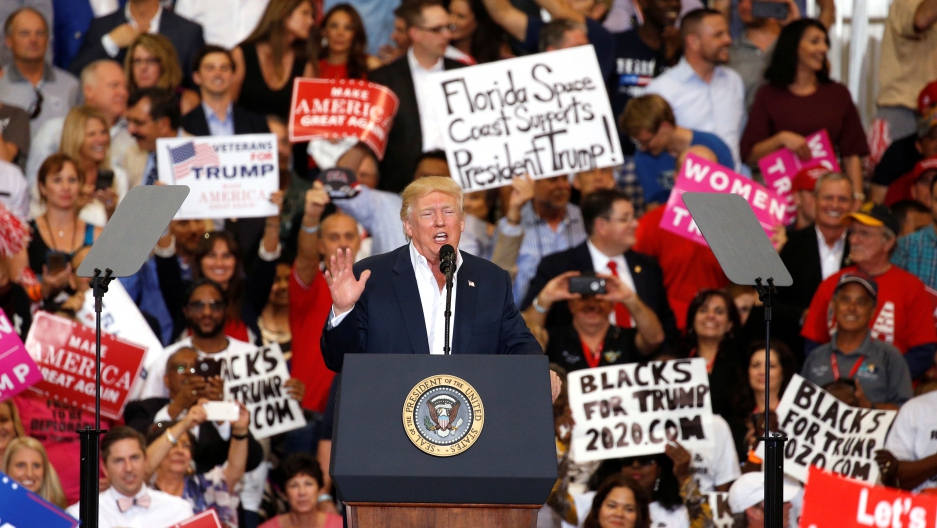 Though President Donald Trump has been in office for just over a month, his administration has already been facing a number of foreign policy questions.

Trump’s initial pick for national security adviser, Gen. Mike Flynn, was ousted before he had the chance to resign because of his communication with Russia regarding sanctions during the 2016 election. On Monday, the president announced that Lt. Gen. H.R. McMaster will take on the role as national security adviser. Though Flynn is out, many are still wondering about the Trump administration’s ties to Russia, and the administration’s comments that Iran is “on notice.”

With so many shifting stances and runaway tweets, it can be difficult for even the closest news watcher to make sense of it all — but we’re here to help. Over the course of President Trump's first 100 days in office, The Takeaway and PRI are using the president’s favorite method of communication — Twitter — to ask him 100 questions.

Many of you have already tweeted your questions to @PRI, @TheTakeaway and @PRITheWorld with the hashtag #100Days100Qs. We’ve waded through some of your questions and asked Takeaway Washington correspondent Todd Zwillich to give us some answers.

Twitter user Amy Catania wants the president to answer this question: “What was the nature of your campaign's contact with Russian intelligence?”

According to Zwillich, the answer is much more complicated than you’d think.

“Here’s what we know so far: It’s now become apparent that the FBI was investigating at least four Trump campaign aides — those are Paul Manafort, Roger Stone, Carter Page and of course, Michael Flynn — for possible contacts with Russia,” Zwillich says. “Now, there was a little pearl of news embedded way deep down in that Donald Trump press conference [from Thursday].”

If you blinked you may have missed it, but Zwillich says that the president was unable to unequivocally say that his campaign had no ties to Russia.

“It took about four stabs of reporters asking him about these possible contacts, and Donald Trump kept saying, ‘I have no contact with Russia, I have no deals in Russia, I don’t know about Russia,’ until finally he was pinned down [and asked], ‘Can you emphatically say that there was no contact between anyone in your campaign?’” says Zwillich. “The president said, ‘Not that I know of.’ That’s a different answer.”

As the administration attempts to sidestep questions about Russia, when it comes to the question of Iran, Zwillich says the issue comes with multiple layers.

“The Iran ‘on notice’ comment actually goes back to Mike Flynn,” says Zwillich. “He said it on Jan. 31 after Yemeni Houtis, backed by Iran, attacked a Saudi warship. Now, the statement at the time seemed to be in context of the war on Yemen, and analysts have interpreted that statement to signal an intention from the Trump administration to increase support for Saudi Arabia’s efforts in that Yemeni proxy war.”

However, Zwillich says that it’s still unclear exactly what all this means. Some analysts, he says, say the comment could suggest that the Trump administration may step up covert efforts in Iran as it relates to regime change and undermining the Iranian government.

“Now, that gets really complicated,” says Zwillich. “The Saudis will like that, Israel may like it, but one problem and one thing that shows just how complex the Middle East is: The Houtis are enemies of AQAP — al-Qaeda in the Arabian Peninsula. There are no free moves here, so that gets very complicated, and of course, Mike Flynn is no longer national security adviser.”

When it comes to health care, global security, immigration, foreign policy, education and domestic issues, what questions should President Trump have to answer?

Tweet your questions to @PRI, @TheTakeaway and @PRITheWorld with the hashtag #100Days100Qs. We’ll wade through your suggestions and nominate one question each day that we think the president should answer. We hope you’ll join us in tweeting each day’s question because more tweets are better than one. Each question should be tagged with #100Days100Qs.

In addition to Twitter, we’re looking for your suggestions on Facebook and Anchor — leave The Takeaway, PRI or The World a comment, or record an Anchor message to add your voice to the discussion. You can also send us a voice memo using the PRI app. We may play your response on one of our shows, use your comments in an upcoming article, or even turn your comment into one of our questions.