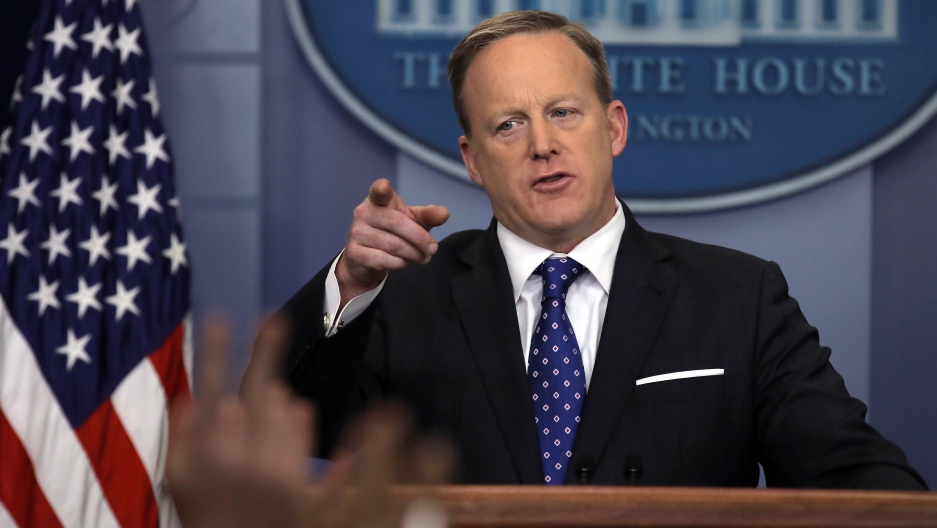 Mr. President, what are you going to do with DAPA and DACA?

“The president wanted to take the shackles off individuals in these agencies and say, 'You have a mission, there are laws that need to be followed, you should do your mission and follow the law,'" White House Press Secretary Sean Spicer said Tuesday during a press briefing.

"Taking the shackles off" means the US government will now deport immigrants for minor offenses and will remove some due process protections.

Over the course of President Trump's first 100 days in office, The Takeaway and PRI are using the president’s favorite method of communication — Twitter — to ask him 100 questions. Immigration is top of mind for people like Maite Rodriguez, who tweeted at us: "Mr. President, what are you going to do with DAPA and DACA?"

DACA is Deferred Action for Childhood Arrivals, an executive order issued by President Barack Obama in June 2012 to give temporary relief from deportation and work authorization to some undocumented immigrants who were brought to the US as children. The new rules from this week did not address the program, and the Department of Homeland Security said their memo would not affect DACA recipients.

DAPA, Deferred Action for Parents of Americans, expanded the DACA program to include undocumented immigrants of any age who arrived as children and have lived in the US continuously since 2010, as well as to the undocumented parents of US citizens. That program was effectively halted by a court injunction last July. It's not part of Trump's agenda, but he did comment on DACA directly last week.

"DACA is very, very difficult for me," the president said in his Feb. 16 press conference. "To me it's one of the most difficult subjects you have, because you have these incredible kids, in many cases, not in all cases — in some cases they're having DACA and they're gang members and drug dealers, too — but you have some absolutely incredible kids, I would say mostly. It's a very tough subject. We are going to deal with DACA with heart."

So what do the new DHS rules really mean for undocumented immigrants?

“There’s a lot of fear, a lot of uncertainty,” says Camille Mackler, director of legal initiatives for the New York Immigration Coalition.

When it comes to questions of due process, Mackler says the game has changed.

“If you’ve never had a deportation order, what they’re saying now is that they’re going to be greatly expanding some sections of the law,” she says. “If you entered without inspection — meaning that you entered without a visa or a valid document — and you cannot prove in the moment during your apprehension that you have been in the United States for more than two years, they will subject you to what’s called ‘expedited removal,’ which means that you will be deported without a hearing.”

Expedited removal is usually a tactic employed at the border, says Mackler. It allows even low-level DHS officers to order the immediate removal of an individual from the United States and strips the person of due process protections, like the right to an attorney and a hearing before a judge.

Mackler recommends that undocumented immigrants keep some kind of proof on hand that they’ve been in the US for at least two years, like a housing lease, school records or other official dated documents. She also suggests that undocumented people ask for a lawyer, and then exert their right to remain silent to the best of their ability.

“Once that expedited removal process kicks in, we’re talking about [deportation within] a matter of days, if not hours,” she says.

“I don’t think anyone is safe right now,” Mackler adds.

Andrea Bonilla, a DACA recipient who was born in Ecuador and is now a freshman at Lafayette College, says she doesn’t feel very secure anymore.

“My family isn’t completely safe, so I can’t be calm if they’re not all safe and OK,” Bonilla says. “[My parents] are definitely scared.”

Bonilla was hoping to sign up for a college study abroad program, but Mackler says that it’d be very dangerous for her to do so under the new DHS rules.

Jong Min-you is a Korean-born undocumented immigrant who has lived in the US since he was a small child, but was too old to qualify for DACA.

“After [President Trump] did win, I just thought, ‘Maybe we should give this guy a chance?’” he says. “I guess only a month after his presidency, I guess that chance is over. We need to fight back, to try and mobilize, and try to hopefully get a good immigration bill through Congress.”

Jong has been in the United States for more than 35 years and has no viable path to citizenship — unless Congress passes immigration reform, he is officially out of options.

“My parents, too, have no pathway to citizenship,” he says. “I think the American public has to understand that this immigration system is dysfunctional.”

Though he’s not personally scared of being deported, he is worried about his family and others.

“I fear for my parents, I fear for people crossing the street, I fear for people who are driving without licenses,” he says. “I just think that, somehow, the United States — this great land that we call home — should protect these people, those who are powerless and unfortunate. It should stand for the moral fabric of our society, and I just feel for these people. We have no power at all, and may get abused and taken advantage of and just thrown out of the country without any due process, and I think that’s just sad.”