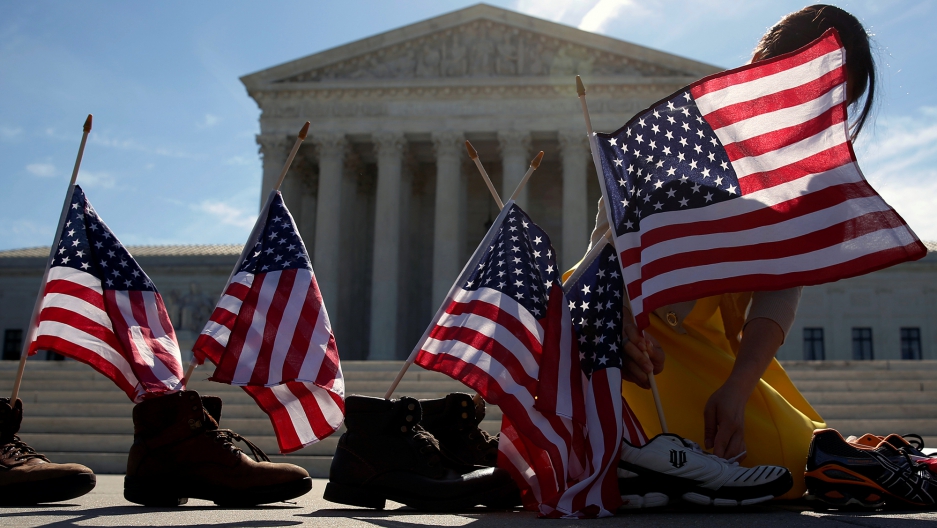 Activists from the Legal Aid Justice Center place shoes and US flags in front of the Supreme Court to demonstrate against deportations of undocumented immgrations on June 13, 2016. Today's tie in a case about undocumented immigrants was disappointing to many advocates.

"The judgment is affirmed by an equally divided court."

In a one-page document, the Supreme Court upheld a lower court's injunction of the Obama administration's effort to expand a program to give temporary relief from deportation to millions of undocumented immigrants. In the case of the United States v. Texas, eight justices came to a 4-4 tie, effectively halting the program.

UPDATE: On July 18, the Obama administration asked the Supreme Court to hear the case again once a ninth justice is appointed. In the petition the administration says that it is "exceedingly rare for this Court to grant rehearing," but it cites an example when a case tied and was heard again because of a vacancy. Immigrant advocates welcomed the request, though they recognize that it is not a guarantee that the Court will accept it.

This, Texas argues, would put an undue finacial burden on states to issue identification and drivers licenses to millions of people.

The programs were scheduled to start in May 2015 and would have granted certain undocumented parents temporary employment authorization and relief from deportation. But the expansion of DACA and DAPA were put on hold by a federal court. When Justice Antonin Scalia died in February, it became apparent to many Supreme Court-watchers that unless his seat was filled, there could very well be a tie.

One-page document released by the Supreme Court on the decision regarding the expansion of DACA/DAPA.

Maru Mora Villalpando, a community organizer in Washington state, was not surprised by today's split decision. She first came to the US from Mexico in 1992 and overstayed her tourist visa when the North American Free Trade Agreement (NAFTA) began and Mexican presidential candidate Luis Donaldo Colosio was assassinated.

"At that time, I was trying to be involved in politics and I was trying to survive," she says. "I decided to not go back because it was impossible for me. The last time I was able to see my family [in Mexico] was 20 years ago."

Villalpando, now 45, says that even if she tried to go back, she fears that she would be placed in detention and deported. And if she were deported, she would not be allowed to return to the US for decades. She has a US-born daughter, which might have made her eligible for temporary relief via DAPA. Today's ruling takes her back to the status-quo.

"For us it means we have to know each others' locations throughout the day, to ensure that we haven't been detained by [Immigration and Customs Enforcement]. Just contact with police, for us, equals deportation proceedings," says Villalpando. She also cannot travel outside the US.

A study by the Migration Policy Institute (MPI) and the Urban Institute found that some 3.6 million undocumented parents with citizen or lawful permanent resident children might have been eligible for DAPA if it went forward.

Over 5 million people could have been eligible for DAPA and the DACA expansion overall. US Citizenship and Immigration Services (USCIS) reports that as of March 2016 they have received almost 800,000 inital applications for the original DACA program — which is still intact — and granted the temporary relief to about 700,000 people. MPI estimates that about 1.2 million people were immediately eligible for the program when it began in 2012.

Andrea Sáenz, who represents immigrants for the public defenders organization Brooklyn Defender Services and has written about the impact of Scalia’s death on this case, says she's disappointed by the tie, and also disappointed that there is no further written decisions from the judges.

“I’m feeling surprised and disappointed. I really think a lot of us thought these programs would go forward, that they would benefit a lot of people. As imperfect as they were,” says Sáenz. “It’s also very disappointing to not know why.”

"More than ever, Congress must step up and do its job to fix our badly broken system," said an email statement from Todd Schulte, president of the immigrant advocacy group FWD.us.

Even without comprehensive reform and the injunction on these new programs, advocates are asking the government to still help undocumented immigrants.

“I hope that going forward, that the Obama administration and the next administration will remind the Department of Homeland Security that they still have discretion,” says Sáenz. “I hope that we can still decide not to detain and deport people who have kids here, who are extremely positive contributors to their communities.”

That discretionary power of the president has not been challenged in the courts.

So Villalpando says the next step for her and others who are looking for relief is to ask Obama to use his remaining days in office to help undocumented immigrants — to make that part of his legacy.

"He could do it by calling for a moratorium on deportations right now," says Villalpando. "He's still the boss of [the Department of] Homeland Security. He can still do it."

The incoming president, though, may have a much more difficult time using executive actions, says Sáenz.

Presumptive Democratic presidential nominee Hillary Clinton has said she would expand programs for undocumented immigrants if elected. In a statement today, she said: “Today’s deadlocked decision from the Supreme Court is unacceptable, and show us all just how high the stakes are in this election."

Donald Trump, the presumptive Republican nominee, has vowed to end the program. He said in a statement that the ruling today "blocked one of the most unconstitutional actions ever undertaken by a President." He also called out the importance of Supreme Court appointments.

In a response he delivered from the White House this morning, President Obama placed responsibility for the tie on Republicans who refuse to hold hearings to appoint a ninth justice to the Court after Justice Scalia's death.

"This is part of the consequence of the Republican failure so far to give a fair hearing to Mr. Merrick Garland, my nominee to the Supreme Court. That means that the expanded set of commonsense deferred action policies — the ones I announced two years ago — can't go forward at this stage until there’s a ninth justice on the court to break the tie," Obama said.

The administration also has the option to ask the Supreme Court to hear the case again once there's a ninth justice, though it's unclear whether the Court would accept such a request. Broadly, though, today's ruling is cause for concern and we can expect "a lot of complicated and messy litigation ahead in the lower courts," says Anil Kalhan, who specializes in immigration law at Drexel University.

"Immigrant communities will certainly have reason to see the significance of the politicization of the appointment process," says Kalhan. That there were no indications of what each justice thought about the case "highlights the extent to which the federal judiciary and the Supreme Court have become deeply politicized."

With additional reporting by Monica Campbell and Maria Murriel.