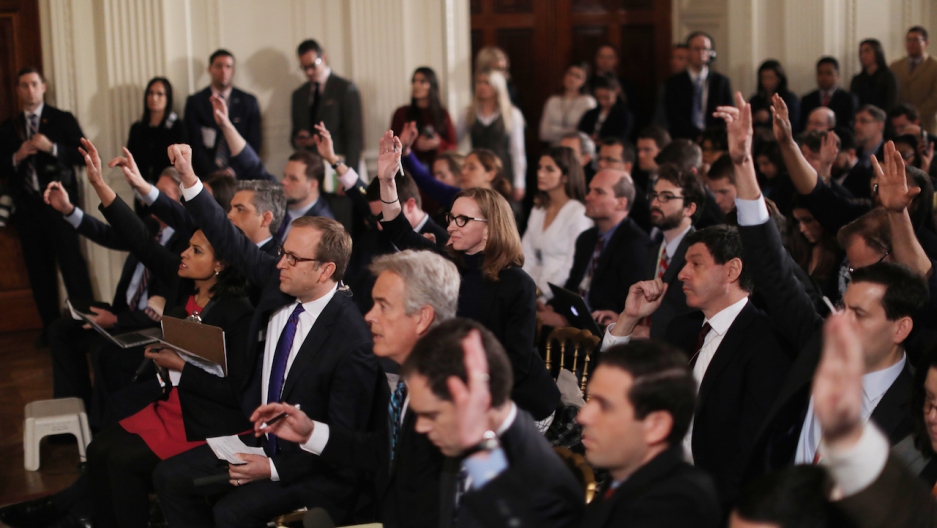 Reporters shout questions during a news conference by US President Donald Trump at the White House, Feb. 16, 2017.

President Donald Trump insisted there was "zero chaos" in his crisis-hit White House and railed against enemies in the media, politics and the courts Thursday, in a meandering first solo news conference.

The 70-year-old US president vented frustrations, wondered out loud about a "nuclear holocaust" and insisted he is "not a bad person" in a remarkable one hour, 16 minute ask-me-anything appearance.

Standing in the East Room of the White House — beneath the painted gaze of George Washington and where Abraham Lincoln's body lay in repose — the 45th president insisted he had "inherited a mess."

Insisting his administration "is running like a fine-tuned machine" Trump accused the "dishonest" media of stirring-up crises that have sent his approval rating plummeting.

In just four weeks, Trump has seen his national security advisor resign, a cabinet nominee withdraw, a centerpiece immigration policy fail in the courts and a tidal wave of damaging leaks.

"There is zero chaos," Trump insisted, as he tried to air a litany of grievances.

"We have made incredible progress. I don't think there's ever been a president elected who in this short period of time has done what we've done."

The conference was combative and lengthy. It's worth watching the whole thing:

"The press honestly is out of control," he said, while vowing to hunt down the culprits of "criminal leaks" that have exposed questionable ties between key aides and the Russian government.

"The press has become so dishonest that if we don't talk about it, we are doing a tremendous disservice to the American people," he said, while variously telling reporters to "sit down" and be "quiet."

Between questions about Russia, his untrue statements and his wife, Trump pondered how future media coverage of such an event would look.

"I'm not ranting and raving," he said preemptively, "I am having a good time."

Trump also took aim at fellow politicians whom he accused of "lying to you to get elected."

"The only thing" opposition Democrats can do, Trump said "is delay because they screwed things up royally, believe me."

Trump also defended his executive order banning travelers from seven Muslim-majority countries, which has been suspended by a circuit court.

"I will not back down from defending our country. I got elected on defense of our country. I keep my campaign promises, and our citizens will be very happy when they see the result," he said.

"That circuit is in chaos and that circuit is frankly in turmoil. But we are appealing that, and we are going further," he said. In fact, the Justice Department announced it is dropping the appeal.

"We're issuing a new executive action next week that will comprehensively protect our country."

Trump also signaled a new approach to how America talks about its defense and foreign policy.

"I'm not going to tell you anything about what response I do."

When asked about Russian military maneuvers and the passage of a spy boat off the coast of Connecticut, Trump was candid about his thinking.

"The greatest thing I could do is shoot that ship that's 30 miles off shore right out of the water. Everyone in this country's going to say 'oh, it's so great.' That's not great. That's not great."

"Look, it would be much easier for me to be tough on Russia, but then we're not going to make a deal," he said. "Don't forget, we're a very powerful nuclear country and so are they."

"Nuclear holocaust would be like no other," he said.

President Trump also announced Thursday he has nominated Alexander Acosta to be the US secretary of labor, the first Hispanic American chosen for his cabinet.

Acosta is a former federal prosecutor in Florida and now the dean of the law school at Florida International University (FIU). He has also served on the National Labor Relations Board and led the Justice Department's civil rights division.

Acosta was tapped one day after Trump's first nominee for the post, Andrew Puzder, withdrew under pressure over his business record and other past controversies in his personal life.

"I think he'll be a tremendous secretary of labor," Trump said of Acosta at a White House news conference. "He has had a tremendous career."

A Harvard Law graduate, Acosta clerked for Supreme Court Justice Samuel Alito, before working as a corporate attorney in Washington where he specialized in labor issues.

Trump had faced criticism for not nominating any member of the Latino or Hispanic community to his inner circle, despite the nation's Hispanic population topping 17 percent.

Cabinet members require confirmation by the US Senate. Puzder, a fast-food executive who faced intense criticism for his labor policies including opposition to minimum-wage increases, withdrew after it became clear he did not have sufficient votes.

By nominating Acosta, considered a more mainstream pick than Puzder, Trump was seen as seeking to ease some of the turmoil that has gripped his White House in his first month in office.

He has already been confirmed three times by the Senate for various posts, suggesting he should have a smoother ride than the previous nominee.

In March 2011, as the tenth anniversary of the 9/11 attacks neared, Acosta testified before a Senate judiciary panel about protecting the civil rights of American Muslims.

"These efforts following 9/11 were important. They set a tone," he told Congress. "They reminded those who might be tempted to take out their anger on an entire community that such actions were wrong."