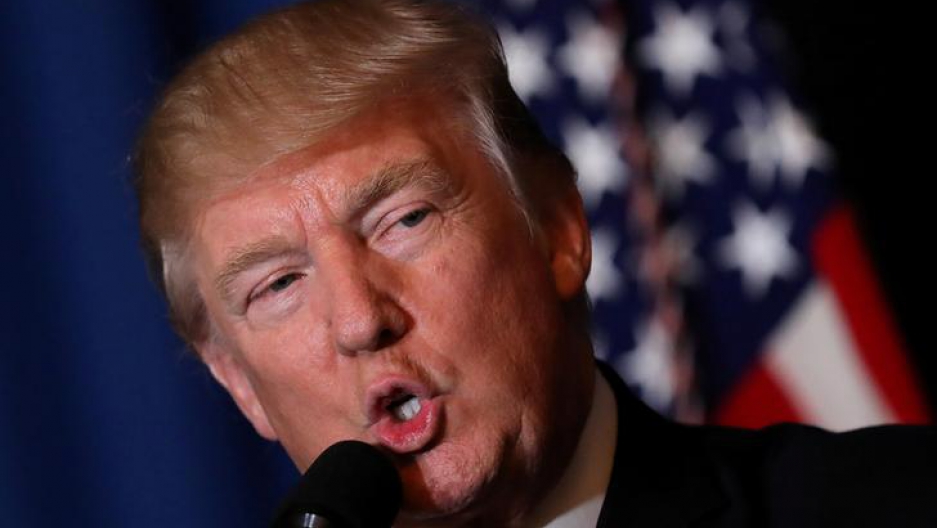 President Donald Trump is shown here addressing reporters from his Mar-a-Lago estate in West Palm Beach, Florida, as he remarks on US airstrikes against Syria on April 6, 2017.

#76. @realDonaldTrump, are you concerned about your historically low approval ratings? #100Days100Qs

Being president is not a popularity contest.

That’s an especially good thing for Donald Trump. Because if it were, he’d be losing.

Last week, the latest polls gauging the president’s approval rating showed that 56 percent of Americans disapprove of Trump, while only 34 percent approve — an 11-point drop since Investor’s Business Daily (IBD)/TechnoMetrica Institute of Policy and Politics last conducted the poll in March.

Of course, polling is not an exact science. It is natural to expect that different polls will report different findings. It’s no different for Trump.

In mid-February, for example, political analyst Nate Silver explained that polls indicating Trump’s disapproval rating ranged from 43 to 56 percent of Americans. There are reasons for this variation: Some polls surveyed groups of likely voters and others all adults, and some were conducted over the phone or online.

Despite the inconsistencies from one poll to the next, one thing is clear: Even at the 43 percent side of that range, in February, Trump fared "much worse" with the American public compared to previous presidents. And as of April 3, Trump has the lowest approval rating since Gallup began keeping a pulse on presidential approval ratings back in 1953.

Interested in seeing just how Trump stacks up against his predecessors? Silver’s website, FiveThirtyEight, visualized Trump’s approval ratings as they compare to presidents past all the way through Harry S. Truman.

The fact that many Americans disapprove of Trump is evident outside of the polls, too. People have taken to the streets over and again since Trump was elected, to voice their opposition to his policies.

President Trump, you have a history of denying reports that you don’t agree with. Are you still dismissing negative polls as “fake news,” like you were two months ago?

Or, Mr. President, will you reflect on why a significant number of the American people are unhappy with your performance as commander-in-chief?