In the run-up to the general election on Nov. 3, our series examines how US President Donald Trump and Democratic challenger Joe Biden diverge on key issues by identifying important stories that highlight what the candidates would do differently on the global stage:

The administration of President Donald Trump has gone in a unique direction on foreign policy in the Middle East, undoing some of his predecessor Barack Obama’s accomplishments yet continuing with a number of anti-interventionist tendencies that were already in motion.

Most notably, whereas Obama had steered America toward Shia heavyweight Iran, Trump has tilted back strongly toward the moderate Sunni Arab powers and Israel after emphatically pulling out of the 2015 agreement to limit Iran’s nuclear development. 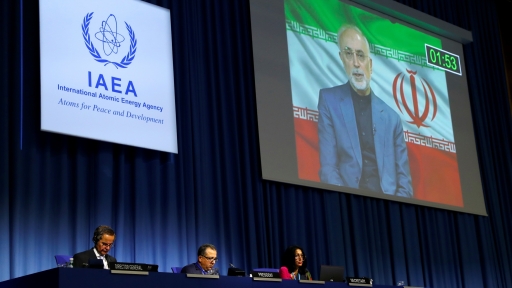 IAEA Director General Rafael Grossi listens as head of Iran's Atomic Energy Organization Ali-Akbar Salehi delivers his speech at the opening of the IAEA General Conference at their headquarters in Vienna, Austria, Sept. 21, 2020.

Trump has sought recognition for his efforts to wind down US military commitments in the region as part of his America First vision. Former Vice President Joe Biden, Obama’s second-in-command, isn’t planning to rush back into costly interventions if he wins on Nov. 3. But he would re-engage Iran — along with European allies — to reinvigorate the nuclear deal.

And according to revelations made public Wednesday by the FBI, Iran is currently stoking political discord in the US to discredit the election process and possibly make Trump look bad. Unsurprisingly, Iranian state media have been more positive about Biden’s record. At a rally later that day in North Carolina, Trump responded to the hacking news by saying, “After we win, the first call I’ll get will be from Iran saying, ‘Let’s make a deal’.”

Here’s where the 2020 US presidential candidates stand on Iran diplomacy, rejoining the deal, Soleimani’s killing, the Abraham Accords and regional wars:

The Iran nuclear deal, formally called the Joint Comprehensive Plan of Action (JCPOA), remains on life support, a half-decade after being signed by Iran and the five permanent UN Security Council members, plus Germany.

Under this nuclear non-proliferation pact, Iran eliminated its medium-enriched uranium stockpile and significantly reduced its quantity of centrifuges. In return for compliance — and verification by the International Atomic Energy Agency (IAEA) — Iran received relief from harsh sanctions.

Trump had railed against the arrangement for failing to curb Iran’s ballistic missile program and aggressive regional activities. But Biden believes that the Iranian threat has since worsened, especially as Trump failed at the UN last month to compel allies to extend an arms embargo.

Last year, with its nuclear “breakout time” shortened, Iran declared that it had breached the limit on its uranium stockpile. In an op-ed for CNN, Biden wrote that Trump has been “bringing us closer to another Middle Eastern war” without a realistic endgame.

Biden has said he would strive to keep nuclear weapons out of Iranian hands yet offer the Islamic Republic a viable diplomatic path to a stronger JCPOA. His focus is on pacifying regional conflicts while pushing back against Iran’s destabilizing actions. He also pledges to stand up for human rights in Iran, including advocacy for political prisoners such as lawyer Nasrin Soutoudeh. Moreover, he would roll back Trump’s travel ban mostly targeting Muslim-majority countries.

Suggesting a phased approach to restart the nuclear deal, Biden knows that hardliners could win Iran’s June 2021 presidential election if reformists can’t score some victories soon. The country’s moderates may be punished at the polls by millions of Iranian voters who believe that the benefits of the deal never materialized, as oil exports were blocked and sanctions snapped back. With current President Hassan Rouhani not running again, the contenders will advocate for either more muscular self-reliance or better ties with China. 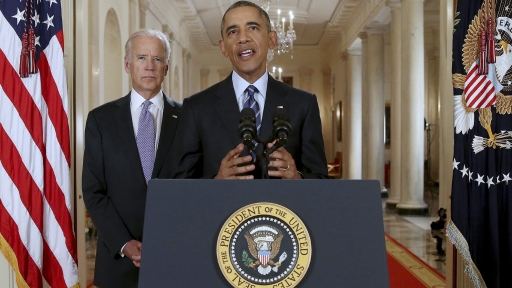 Former US President Barack Obama delivers a statement after a nuclear deal was reached between Iran and six major world powers, beside former Vice President Joe Biden, in the East Room of the White House in Washington, July 14, 2015.

One possible roadmap of US engagement under Biden — as articulated by Ellie Geranmayeh, a senior policy fellow at the European Center for Foreign Relations — would begin with an interim deal by February, freezing Iran’s nuclear activities that exceed the limits of the original agreement. This stage would entail the US administration, in response, removing sanctions on humanitarian goods, Iranian officials and potentially oil exports. And then the next step, with all sides in a state of compliance, could result in most sanctions being lifted by summer.

Subsequently, “more-for-more” discussions could occur after the Iranian elections. These would address the sunset clause for the JCPOA, Iran’s missiles, and the larger game of geopolitical chess in the region. All of this presents a high bar, irrespective of who the next US president is. Both sides face a trust deficit, and Tehran could demand compensation for the recent financial harms of intense sanctions.

Meanwhile, Iran at the moment remains constrained by the overwhelming US military presence nearby and economic weakness, exacerbated by the “maximum pressure” sanctions campaign and a coronavirus pandemic that continues to wreak havoc. Biden has promised to make sure that sanctions do not hamper Tehran’s ability to fight COVID-19, in light of how the spiraling humanitarian situation nearly set off a major conflagration with Iran just months ago.

Last fall, a series of attacks on oil tankers in the Persian Gulf were attributed to Iran, as were brazen strikes on Saudi oil installations in September 2019. Regional tensions spiked, and fears grew of a miscalculation leading to a direct confrontation.

This year’s surprise killing of Soleimani, leader of the Quds Force responsible for Iran’s overseas special operations across the Shia crescent, has perhaps been Trump’s biggest feat in the region. While many domestic and foreign critics predicted that the rash assassination would lead to deadly reprisal attacks or even war, such overt conflict didn’t quite materialize.

On the campaign trail, Trump and his running mate, Vice President Mike Pence, frequently boast of their record in killing Soleimani. They also brag that Iran hasn’t really hit back for taking the life of the second-most powerful figure in Iran, who architected the country’s expansive policies in the Middle East.

And after Tehran launched retaliatory missile strikes on US bases in Iraq — which were largely unsuccessful but symbolic — Trump said that no American soldiers were harmed, despite indications to the contrary. He also urged world powers to go back to the drawing board and put together a more durable nuclear accord.

Biden, for his part, had a measured response to the escalating events. “No American will mourn Qassem Soleimani’s passing,” Biden said in a statement on Twitter. “He deserved to be brought to justice for his crimes against American troops and thousands of innocents throughout the region. He supported terror and sowed chaos.”

However, the Democratic challenger also highlighted many of the concerns harbored by members of his party, suggesting that the move was like tossing “a stick of dynamite into a tinderbox” and demanding that Trump give the American public “an explanation of the strategy.”

While in hindsight Biden’s predictions of a fierce Iranian reaction seem overblown, his comments about the Trump administration’s lack of “long-term vision” may have stood the test of time. Iran declared that it would scrap all the limitations of the nuclear deal after Soleimani’s killing, though the country said coordination with the IAEA could continue.

Even if pandemic casualties don’t follow sectarian differences, the Sunni-Shia split is increasingly the driving force in shaping regional alliances. Israel, a blistering opponent of the Iran nuclear deal and the most prominent target of Soleimani’s misdeeds, has — with the full-throttle, election-season help of Trump’s negotiators — begun inking a series of quick but long-awaited normalization agreements with Arab states. 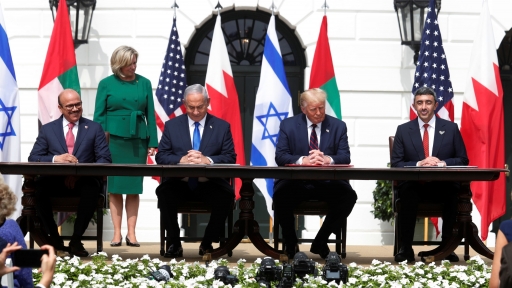 The United Arab Emirates, which has similarly adversarial relationships with Iran and the Turkish-backed Muslim Brotherhood, was the first to finalize a “breakthrough” Abraham Accord with Israel. Despite being historically affiliated with the moderate Sunni Arab states, the Palestinian Authority — in addition to Turkey and Iran — railed against the UAE’s “betrayal” of the Palestinian cause. However, the deal was contingent on Israel not annexing additional land.

Bahrain, where the government has struggled to quell Iran-inspired revolutionary fervor among the majority Shia population, was second to solidify a normalization agreement with the Jewish state. The US Navy’s Bahrain-based Fifth Fleet is an important bulwark against Iran.

Trump has touted the flurry of Middle East peace-making as a huge success, and many skeptics even concede that the deals effectively promote US interests in a turbulent part of the world. The so-called dealmaker came to office seeking to tame Iran and reach a compromise between the Israelis and Palestinians, though that’s not exactly what has transpired. Regardless, Biden would take a liberal internationalist approach — less eager, in theory, to gush over authoritarian governments — yet his leadership would continue to embrace Israel’s regional integration efforts.

While Saudi Arabia, Iran’s arch-rival for stewardship of the Muslim world, has yet to commit to its own normalization with Israel, experts presume that the kingdom will eventually follow the example of its friends in the Gulf. At the same time, Sudan — which cooperated closely with Iran and various militant organizations in the past — is now next to normalize relations with Israel, after Trump’s tweet Monday that Khartoum will be removed from the US State Sponsors of Terrorism list.

In Iraq, Syria, Lebanon and Yemen, Iran has fomented violence by arming and funding Shia militia groups and political factions. And in Gaza, Iran has backed Sunni Islamist factions Hamas and Islamic Jihad. Like many of the other proxy conflicts where opposing regional alliances have clashed, the Yemen conflict is a quagmire that offers no easy solutions.

Biden has said the US will no longer support Saudi Arabia’s war in Yemen, which is a humanitarian catastrophe. His first foreign policy stance after declaring his candidacy was a pledge to end Washington’s assistance to Riyadh in this conflict, putting him on the same side as Senate Democrats and against Trump. More generally, Biden would probably be less enthusiastic about working with the Saudi monarchy, and in turn, Crown Prince Mohammed bin Salman may resent Biden’s renewed interest in reviving the Iran nuclear deal.

Related: With veto, Trump keeps the US in Yemen. Did he 'greenlight a failed strategy?'

Over the objections of Congress, Trump has lent military support to the Saudi-led campaign to defeat Iran-backed and anti-American Houthi rebels that control much of Yemen. Trump used his presidential veto for only the second time to defeat a resolution that would have directed the White House to pull US troops out of participating in the Yemen conflict within 30 days.

Any of the many fronts in the larger struggle with Iran could trip up the victor of the US presidential contest, as the “Great Satan” grapples with its declining influence in the region and faces the reality that regime change in Iran may not be so feasible.