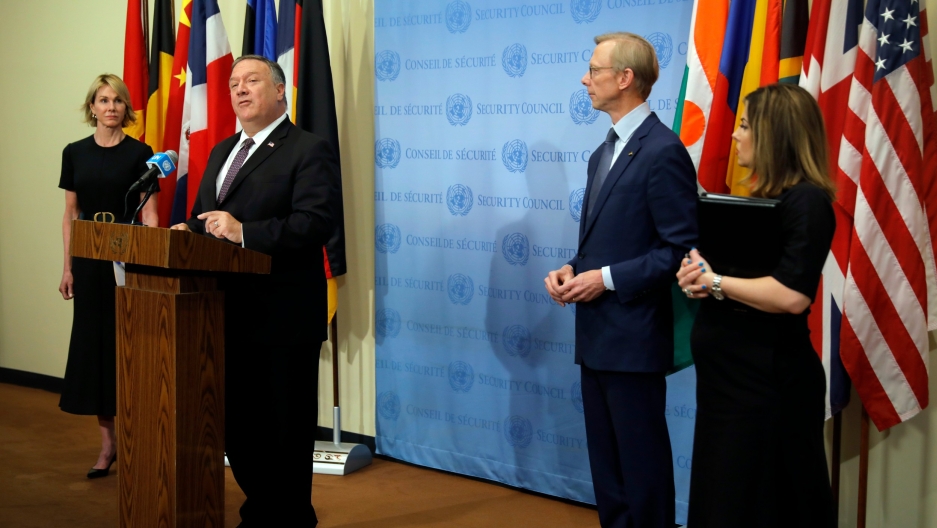 Secretary of State Mike Pompeo speaks to reporters following a meeting with members of the UN Security Council, Aug. 20, 2020.

After the European members of the UN Security Council said last week that the US cannot reimpose sanctions on Iran, Secretary of State Mike Pompeo made serious accusations against some main allies of the United States.

Pompeo said that the US has had the courage and conviction to stand up to Iran, while Europe has not.

"They chose to side with the ayatollahs," said Pompeo. "Their actions endanger the people of Iraq, of Yemen, of Lebanon, of Syria, and indeed their own citizens as well."

Pompeo has been trying in vain to get European support for reinstating multilateral sanctions on Iran. Two years ago, the Trump administration withdrew from the Iran nuclear deal, which was negotiated by the Obama administration.

Wendy Sherman, the chief US negotiator back in 2015, joined The World's Marco Werman to discuss the latest. She is a former undersecretary of state for political affairs and currently a professor at the Harvard Kennedy School.

Marco Werman: The Trump administration says Iran has violated the terms of the 2015 nuclear deal and says sanctions should snap back. A snapback was a provision in the Joint Comprehensive Plan of Action. Can you explain what it does? And do the conditions currently exist for a snapback?

Wendy Sherman: When we negotiated what's known as the Iran nuclear agreement, the Joint Comprehensive Plan of Action, we wanted to make sure that if Iran was in deep violation of the agreement, that any country who had been a participant and was a participant of the deal could go to the UN and snap back the multilateral sanctions. The Trump administration left the deal in 2018, loudly saying by the president of the United States, that we were no longer a participant in the deal. And so [Thursday], you heard Germany, Great Britain and France — all members of the agreement — say that the United States was no longer a participant because it had left the deal. Therefore, [the US] has no standing at the United Nations on this matter and cannot snap back sanctions.

The sanctions on Iran that were lifted when the nuclear deal was signed — are those sanctions still in place? And can Iran still weave around them?

The United States, under the Trump administration, reimposed all of the sanctions that had been lifted as a result of the agreement. And what they are seeking at the United Nations is to have the multilateral UN sanctions reimposed on Iran, even with the "maximum pressure" campaign. Some countries haven't fully complied with the US unilateral sanctions. It's one of the reasons why the administration wants the multilateral sanctions to go back into effect because they believe then they would have a better chance of fully enforcing all of the sanctions, both unilateral and multilateral, that were lifted as a result of the agreement.

What condition is the Iran nuclear deal in at this point?

Well, it's very concerning, because of the "maximum pressure" campaign and other actions by the Trump administration. Very unfortunately, the Iranians have started to take steps in the wrong direction. So they are enriching uranium at a higher percentage, a higher concentration. They are increasing their stockpile of enriched uranium. They are using and researching more advanced centrifuges, the mechanisms that enrich uranium. They are looking at how they can now restart their plutonium program, another path to the material needed for a nuclear weapon. So it is quite concerning because it means that the breakout time — the time needed to get enough material for a nuclear weapon — has decreased significantly.

Editor's note: This interview was edited and condensed for clarity.