It can be easy to overlook how the rest of the world is trying to make sense of America’s chaotic campaign season.

But in many cases, people overseas are paying attention just as closely as US voters are. After all, who wins the American presidency has implications for countries around the world.

Since Sept. 22, we’ve been using machine-learning algorithms to identify the predominant themes in foreign media coverage.

How different countries cover the race between Donald Trump and Joe Biden can shed some light on how foreign citizens discern the candidates and the American political process, especially in places that have strict state control of media such as Russia, China and Iran.

Unlike in the US, where there is a cacophony of perspectives, by and large the media in these three countries follow very similar narratives.

In 2016, we did the same exercise. Back then, one of the main themes that emerged was the decline of US democracy. With scandal and the disillusionment of voters dominating the headlines, America’s global competitors used the 2016 election to advance their own political narratives about US decline.

Some of these themes have again emerged in the coverage of the current race. But the biggest difference is their portrayal of Trump.

In the last election cycle, candidate Trump was somewhat of a political unknown. Although other nations acknowledged his political inexperience, they were cautiously optimistic about Trump’s deal-making ability. Russian media outlets were particularly bullish on Trump’s potential.

Now, however, the feelings appear to have changed. China, Iran and even Russia seem to crave a return to normalcy — and, to some extent, American leadership in the world.

To assess how America’s competitors make sense of the 2020 campaign, we tracked over 20 prominent news outlets from Chinese, Russian and Iranian native-language media. We used automatic clustering algorithms to identify key narrative themes in the coverage and sentiment analysis to track how each country viewed the candidates. We then reviewed this AI-extracted information to validate our findings.

While our results are still preliminary, they shed light on how these countries’ media outlets are portraying the two candidates. Two key moments from the 2020 campaign — the first debate and Trump’s coronavirus diagnosis — are particularly illustrative.

After the first debate, Chinese media questioned its usefulness to voters and generally portrayed Trump’s performance in a negative light. To them, the “chaotic” back-and-forth was a sobering reflection of America’s political turbulence.

They described Trump as purposely sabotaging the debate by interrupting his opponent and, in the days after the debate, noted that his performance failed to improve his lagging poll numbers. Biden was criticized for being unable to articulate concrete policies, but was nonetheless praised for being able to avoid any major gaffes and — as an article from the Xinhua News Agency put it — responding to Trump with “fierce words.”

Unlike in 2016, where Clinton was portrayed as anti-Russian, corrupt and elitist, Russian media appeared more willing to characterize the Democratic Party nominee in a positive light.

In fact, Russian coverage expressed surprise over Biden’s debate performance. He didn’t come across as feeble; instead, he was, as the daily newspaper Kommersant wrote, a lively opponent who appeared to be “criticizing, irritating and humiliating” Trump by calling him a “liar, racist and the worst president.” They did praise Trump’s especially aggressive rhetoric. However, our analysis found that Russian media also repeatedly claimed that, unlike 2016, voters today were tiring of his bombast.

While Trump’s post-debate posturing received some positive coverage, Russian media largely lamented his administration’s failure to deliver substantive progress toward normalizing relations between the two countries. They noted the debate clarified policies neither for voters nor for international observers. 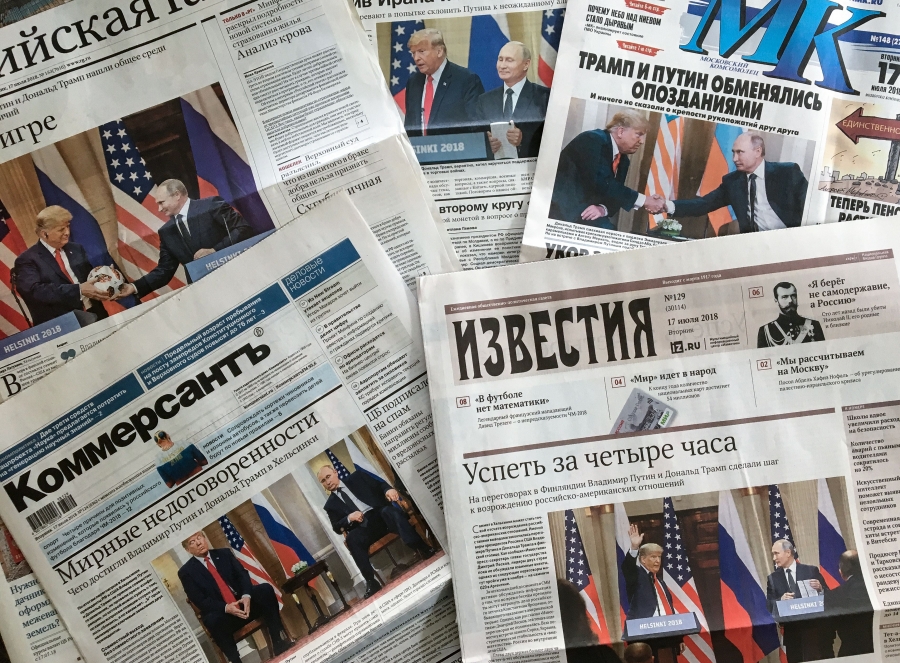 Russian outlets have been largely supportive of President Trump, but have been critical of his handling of the coronavirus.

Iranian media took the strongest anti-Trump stance. Reports routinely pointed out that Trump has had no foreign policy successes, and has only exacerbated relations with the country’s major rivals. According to Iranian media outlets, Trump’s lack of accomplishments has left him with no choice but to rely on insults and personal attacks.

Biden, however, was said to have kept his calm. As Al Alam News wrote, he used “more credible responses and attacks than Trump.”

The former vice president, in their view, promised some semblance of normalized diplomatic relations.

The final month of the US presidential race is known for last-minute surprises that can upend the race. This year was no exception, with Trump’s Oct. 2 announcement of his COVID-19 diagnosis quickly shifting media coverage from the debate to Trump’s health.

He received little sympathy from foreign outlets. Across the board, they were quick to note how his personal disregard for public health safety measures symbolized his administration’s failed response to the pandemic.

For example, one Chinese media outlet, The Beijing News, characterized the diagnosis as “hitting” the president “in the face,” given his previous downplaying of the epidemic. Other reports claimed Trump lacked “care about the epidemic,” including disregard for “protective measures such as wearing a mask.”

Chinese outlets suggested Trump would use the diagnosis to win sympathy from voters, but also noted by being sidelined from holding campaign rallies, he could lose his “self-confessed” ability to attract voters.

Russian media, on the other hand, remained confident that Trump would recover and repeated the White House line of Trump’s good health.

At the same time, Russian outlets tended to chastise Trump’s unwillingness to avoid large gatherings, practice social distancing or wear a mask, all of which violated his administration’s basic health guidelines. Likewise, Russian reports criticized Trump’s post-diagnosis behavior — like tweeting video messages while at the hospital and violating quarantine with his public appearances — as “publicity stunts” that jeopardized the safety of his Secret Service detail and supporters.

Again, Iranian media most directly criticized Trump. Reports characterized Trump as “determined to continue the same approach,” despite his diagnosis, and remain “without a muzzle,” “irresponsibly” continuing to tweet misinformation falsely comparing COVID-19 to the flu. 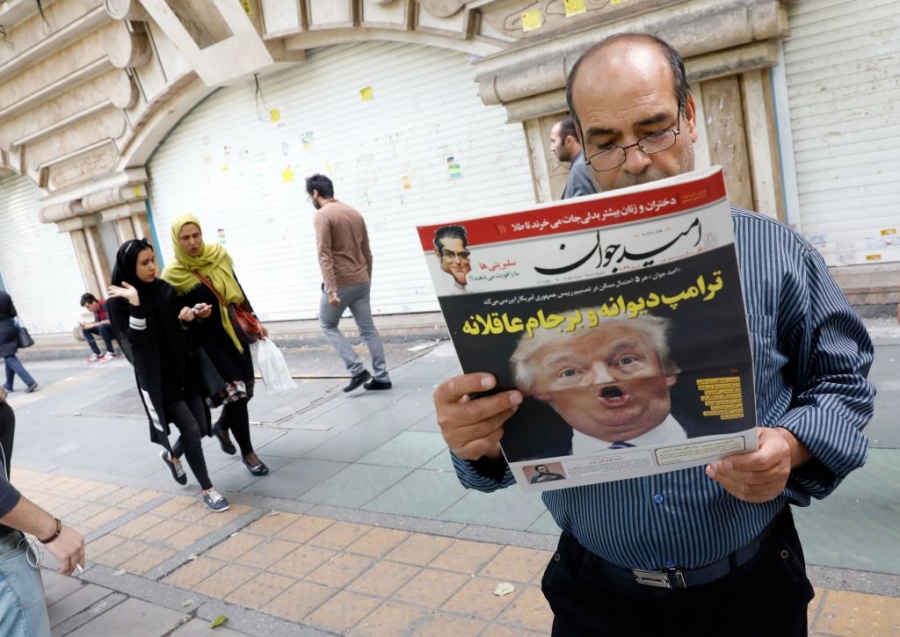 Iranian media outlets have been particularly harsh on the president, with this headline calling him ‘Crazy Trump.’

Coverage centered on Trump’s inability to, as Al Alam put it, show “any sympathy” for over 200,000 dead Americans. This death toll, the same article noted, was attributed to Trump’s “mismanagement, intransigence, ignorance and stupidity,” highlighted by his cavalier disregard for safety guidelines such as wearing a mask.

In the bag for Biden?

Many of the criticisms of the US found in foreign media outlets in our 2016 study appear in this year’s coverage. But since the 2016 election, geopolitics have changed quite a bit — and, for many of these countries, not necessarily for the better. That might best explain their collective ire toward Trump.

During Trump’s first term, Iranians absorbed the US's unilateral withdrawal from the Iran nuclear deal, the reimposition of sanctions and the assassination of one of its top generals.

The Chinese entered into a trade war with the US, while the US government leveled accusations of intellectual property theft, mass murder and blame for the spread of what Trump has called the “China Virus.”

Russians, meanwhile, have seen themselves — fairly or not — bound to Trump’s 2016 election victory and outed as an international provocateur. That Trump has not been able to deliver on normalizing US-Russian relations, despite four years of posturing and political rhetoric, has perhaps made Trump more of a political liability than a worthwhile ally. Not only has the COVID-19 pandemic sparked unrest in Russia’s backyard, but mounting regional instability is also undermining Putin’s image as a master tactician.

As a result, these countries’ outlets appear to have shifted attention away from a broad critique of US democracy toward exasperation with Trump’s leadership.

But even the supposed adversaries of the US seem to be craving a return to stability and predictability in the Oval Office.