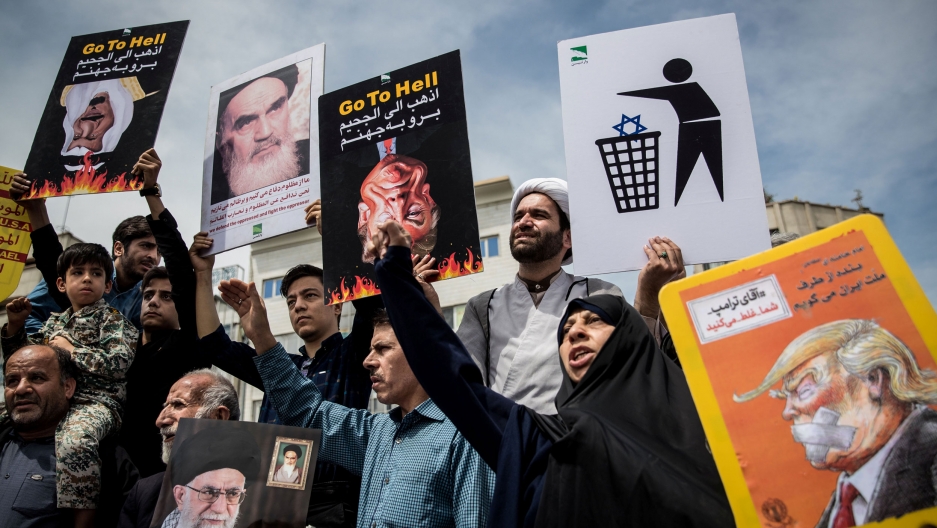 Iranians shout slogans during a protest against US President Donald Trump's decision to walk out of a 2015 nuclear deal, in Tehran, Iran, on May 11, 2018.

This video made the rounds on Iranian social media in recent weeks. It shows a young woman in a bright orange headscarf, dancing and singing loudly on the subway in Tehran. Other passengers join in, and soon, the whole cabin is singing, clapping and dancing.

To most Americans, this video wouldn’t seem out of the ordinary. But there are a few reasons why it got so much attention. It was a rare moment of joy at a time the Iranian economy has shrunk significantly — and people are in no mood to celebrate.

Further, singing and dancing in public have been banned in Iran since the Islamic Revolution of 1979. But Iranians have been pushing back — not just against this rule, but against so many others.

“Being born after the Revolution, we are raised by just hope,” Leila Daneshvar, who lives in Tehran, said in an interview with The World.

But these days, hope is harder to find, Daneshvar added. The politics surrounding Iran's 2015 nuclear deal with world powers are to blame for the economic downturn, experts say.

In 2018, US President Donald Trump announced he was walking away from the Iran nuclear deal, also known as the Joint Comprehensive Plan of Action (JCPOA). China, France, Russia, the United Kingdom, and United States — the five permanent members of the UN Security Council — negotiated the JCPOA alongside Germany. The agreement limited Iran’s nuclear activities in return for some sanctions relief. But Trump said the deal did nothing to limit Iran’s ballistic missile program or its regional aggressions.

Related: This timeline explains the long, bumpy road toward the Iran nuclear deal

Trump said he wanted his own deal — a better deal. And one way his administration has tried to get a better deal is to squeeze Iran’s economy to the point that its leaders would be forced to come back to the negotiating table. The administration referred to its tactic as a “maximum pressure campaign.”

Iran’s economy is on track to shrink by almost 9.5% in 2019. The International Monetary Fund estimates the inflation rate in Iran to be about 36%.

“It went from bad to worse,” said Daneshvar, the Tehran resident.

Daneshvar added that Iran’s economy has been under US sanctions for decades. But in 2018, when the deal was reached, Iranians were looking forward to some relief.

Related: The Iran nuclear deal created an opening for American businesses. Then Trump walked away.

“We were hoping that the Iranian gates are opening, we are dealing, we are manufacturing, we [were] making stuff like a normal country, but, unfortunately, it went from bad to worse,” she said.

Daneshvar runs a company that makes devices for people with disabilities. They make walkers, wheelchairs and grab bars for bathrooms. The "maximum pressure campaign" prevents her company from importing raw material, she said.

“We import ABS, which is a type of plastic. We used to import from China. That company told us that they cannot sell that product to us,” she said.

So her company is searching for other sources for raw material. But in the meantime, prices have shot up.

High inflation, unemployment and economic uncertainty has left many Iranians frustrated. And they have been expressing their anger — on the streets and on social media.

Last month, hundreds of people poured into the streets to protest a major spike in gas prices. The government has cracked down on the demonstrators with deadly force, killing between 300 and 1,500 people, according to reports from Reuters and human rights group Amnesty International.

“There is no doubt about it that the sanctions are hurting the Iranians,” said Nasser Hadian, a professor of international relations at Tehran University. "The protests have been very important in changing the calculus, but mostly of the United States and the Europeans, rather than the Iranians.”

Washington is convinced that the maximum pressure campaign has worked, Hadian said. It was designed to bring down the Iranian economy, and now it’s just a matter of time before Iran’s leaders agree to negotiate a new deal.

But Tehran has been waging a campaign of its own.

Iran carried out a series of attacks on oil tankers in the Persian Gulf region throughout the spring and summer. It is also believed to be behind the September attacks on oil installations in Saudi Arabia.

“We have seen a string of attacks in the region that have brought Iran and the US to the brink of military confrontation twice in the past six months,” Ali Vaez, Director of the Iran Project at The International Crisis Group, a think tank in Washington, DC, told The World.

So far, Trump has refrained from a military response to Iranian aggression in the region.

“This has created this sense in some circles in Tehran that basically no matter what they do, President Trump would not resort to military action,” Vaez said.

But that couldn’t be further from the truth, he added. Hawkish members of the Trump administration have continuously advocated for military action and regime change in Iran. The administration also sent about 2,000 American troops to Saudi Arabia in October.

Meanwhile, as Iranians renege on the 2015 nuclear deal, they are planning to expand the country’s nuclear activities. As such, according to Vaez, Iran will begin enriching uranium in early January at 20%, which is close to weapon’s grade level.

“So we might have a major proliferation crisis on our hands in 2020 if this situation continues,” said Vaez.

Jarrett Blanc, a senior fellow at The Carnegie Endowment for International Peace, a DC-based think tank, said the Trump administration faces a tough question in 2020, which is also an election year in the US. “What helps more, appearing to be a dealmaker but at the cost of sitting down with this Iranian regime that has a lot of opponents in the United States, or continuing to present a very hard line?”

Blanc, who oversaw the implementation of the Iran nuclear deal during the Obama administration, said he doesn’t know what direction Trump is leaning, but that the status quo is risky.

“It’s easy to imagine a miscalculation on one side or the other which leads to a confrontation,” Blanc said.

“They [American officials] are living miles away from my country, but I can say I have seen with my own eyes how much people are suffering,” she said.