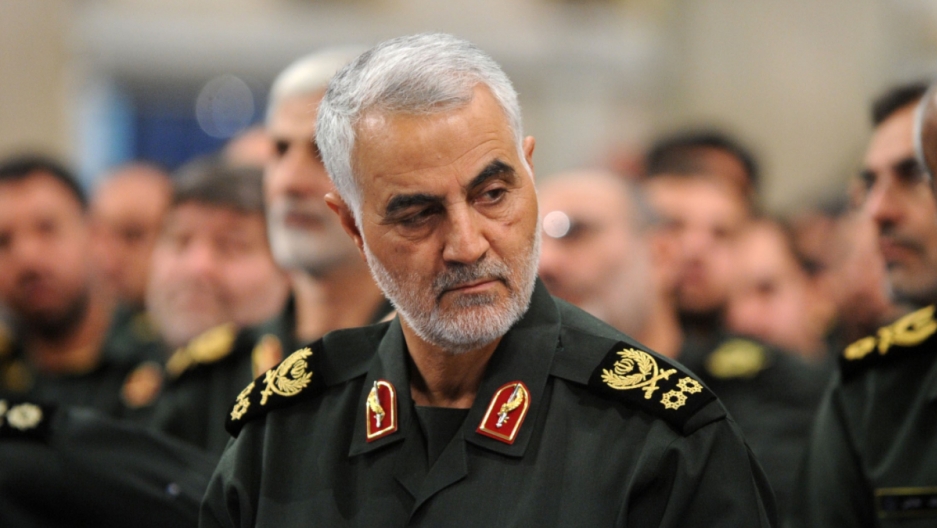 A US air strike in Baghdad overnight killed Qasem Soleimani, commander of Iran's elite Quds Force and regarded as the second most powerful figure in Iran after Supreme Leader Ayatollah Ali Khamenei.

Iran threatened on Friday to hit back hard after the death of Soleimani who was seen as the architect of Iran's growing military influence in the Middle East.

The overnight attack, authorized by US President Donald Trump, marked a dramatic escalation in a "shadow war" in the Middle East between Iran and the United States and its allies, principally Israel and Saudi Arabia.

Iran has been locked in a long conflict with the US that escalated sharply last week with an attack on the US embassy in Iraq by pro-Iranian militiamen following a US air raid on the Kataib Hezbollah militia, founded by Muhandis.

Responding to the strike, Iraq's prime minister said Washington had violated a deal for keeping US troops in his country. Israel put its army on high alert and US allies in Europe including Britain, France and Germany voiced concerns about an escalation in tensions. 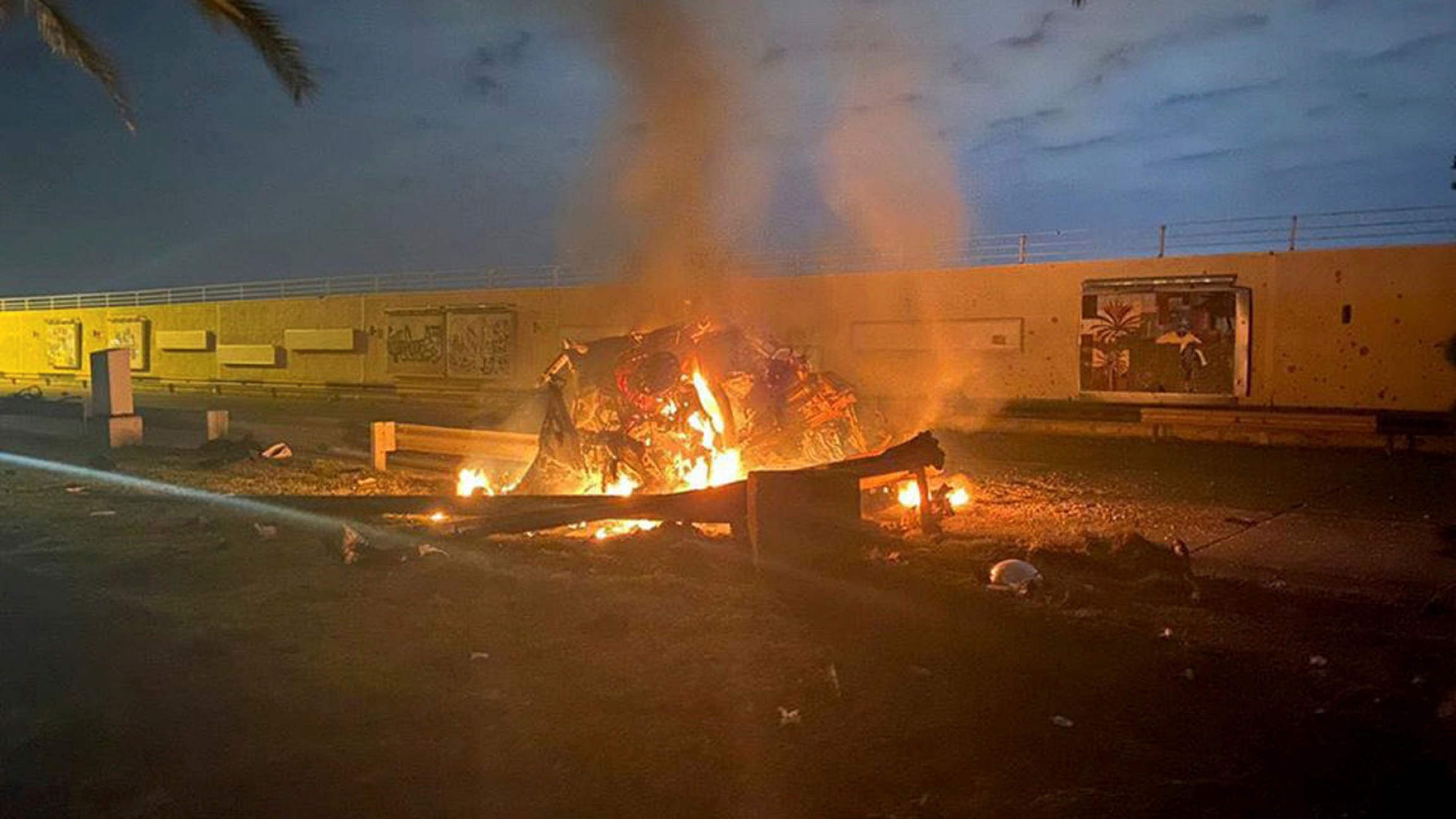 Burning debris are seen on a road near Baghdad International Airport, which according to Iraqi paramilitary groups were caused by three rockets hitting the airport in Iraq, Jan. 3, 2020, in this image obtained via social media.

The Pentagon said the "US military has taken decisive defensive action to protect US personnel abroad by killing Qasem Soleimani." Trump ordered the strike to disrupt future Iranian attack plans, it said.

US officials, speaking on condition of anonymity, said Soleimani was killed in a drone strike. Iran's Revolutionary Guards said he was killed in an attack by US helicopters.

The US Embassy in Baghdad urged all American citizens to depart Iraq immediately.

Concern about disruption to Middle East oil supplies, including shipping crude through the Gulf, pushed prices up nearly $3 a barrel. US employees of foreign oil companies in Basra were preparing to leave the country, but Iraq's oil ministry said output and exports were unaffected.

Khamenei said harsh revenge awaited the "criminals" who killed Soleimani. His death, though bitter, would double the motivation of the resistance against the United States and Israel, he said.

In a statement carried by state television, he called for three days of national mourning.

Khamenei quickly appointed Soleimani's deputy, Brigadier General Esmail Ghaani, to replace him as Quds Force head. The force's agenda "will be unchanged from the time of his predecessor," Khamenei said in a statement.

As leader of the Quds Force, the foreign arm of the Revolutionary Guards, Soleimani, 62, had a key role in fighting in Syria and Iraq.

Over two decades he was at the forefront of projecting the Islamic Republic's military influence across the Middle East, acquiring celebrity status at home and abroad.

Iranian state television presenters wore black and broadcast footage of Soleimani peering through binoculars across a desert and greeting a soldier, and of Muhandis speaking to followers.

President Hassan Rouhani said the assassination would make Iran more decisive in resisting the United States, while the Revolutionary Guards said anti-US forces would exact revenge across the Muslim world.

Hundreds of Iranians marched toward Khamenei’s compound in central Tehran to convey their condolences.

"I am not a pro-regime person but I liked Soleimani. He was brave and he loved Iran, I am very sorry for our loss," said housewife Mina Khosrozadeh in Tehran. 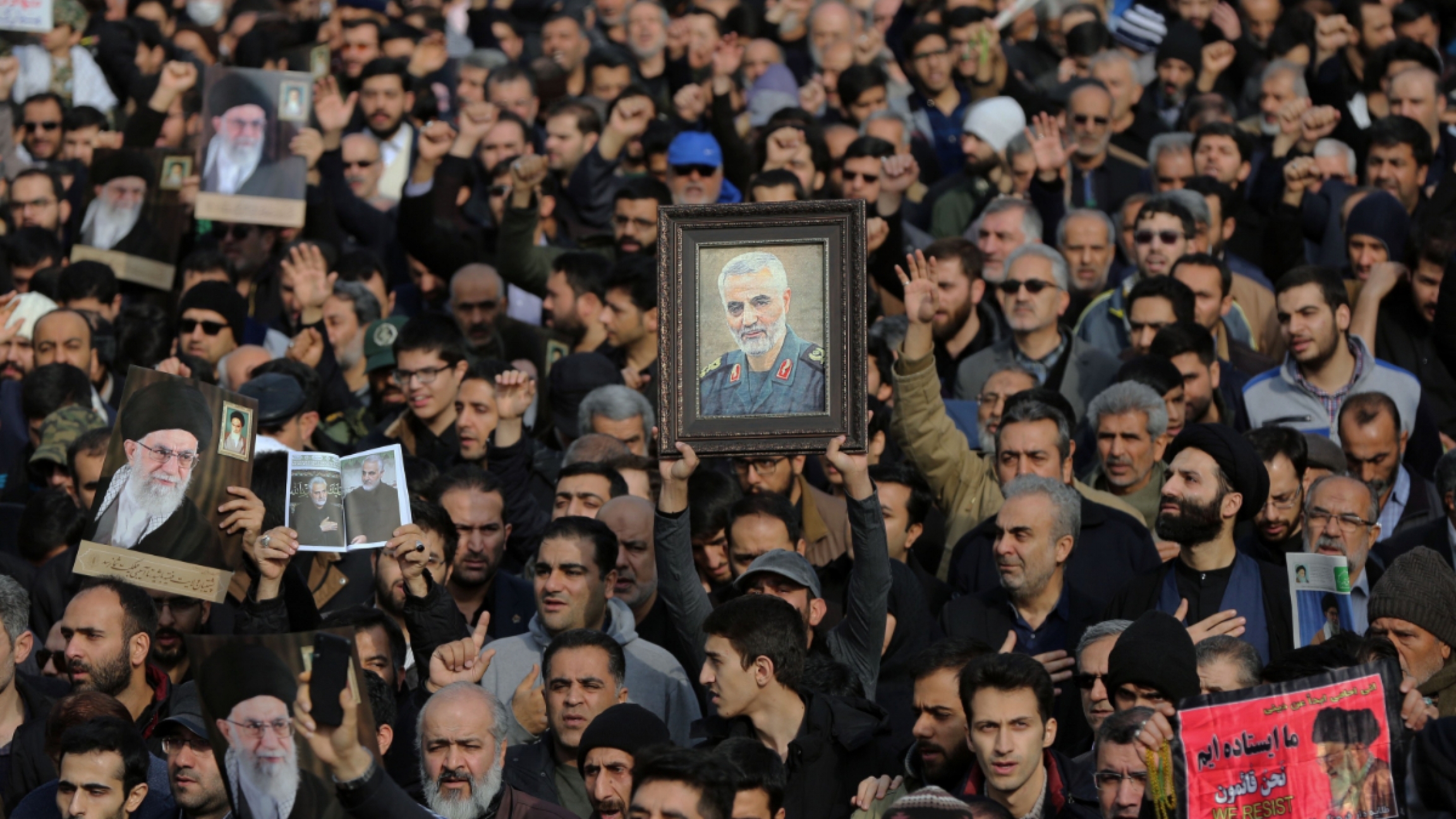 People gather to stage a protest against the killing of Iranian Revolutionary Guards' Quds Force commander Qasem Soleimani after Friday prayer in Tehran, Iran on Jan. 3, 2020.

In Soleimani's hometown, Kerman, people wearing black gathered in front of his father’s house, crying as they listened to a recitation of verses from the Quran. 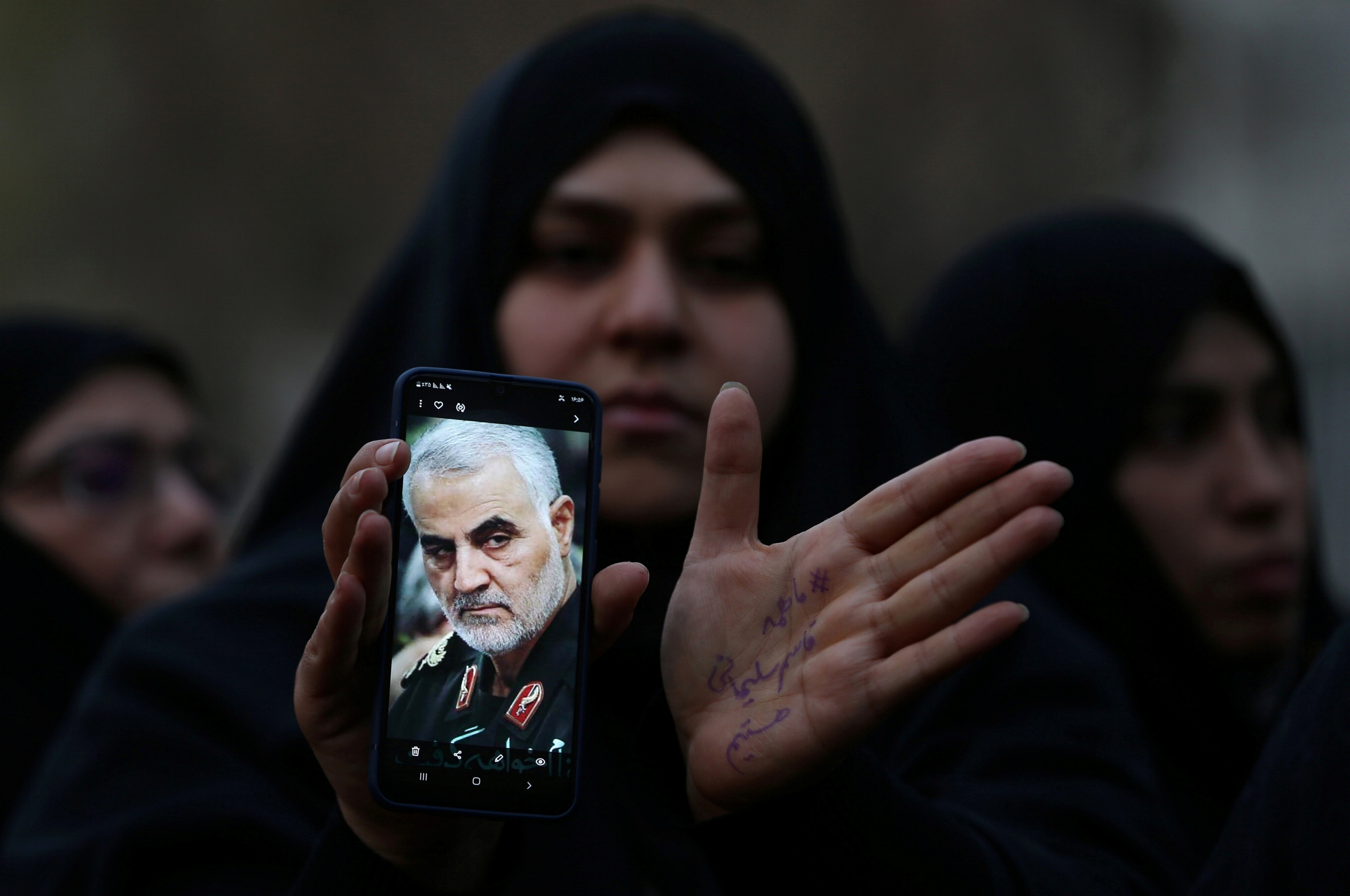 An Iranian woman in Tehran shows a photo of the late Iranian Major-General Qassem Soleimani, during a protest against his assassination on Jan. 3, 2020.

Trump, who is facing impeachment charges, made no immediate comment but posted a picture of the US flag on Twitter.

US House of Representatives Speaker Nancy Pelosi said the attack was carried out without consultation with Congress and without authorization for the use of military force against Iran.

Iraqi Prime Minister Adel Abdul Mahdi condemned the killings as a violation of the conditions of the U.S. military presence in Iraq and an act of aggression that breached Iraq's sovereignty and would lead to war.

In September, US officials blamed Iran for a missile and drone attack on oil installations of Saudi state energy giant Saudi Aramco.

Iran, for its part, has absorbed scores of air strikes and missile attacks, mainly carried out by Israel against its fighters and proxies in Syria and Iraq.

Analysts say Iran is likely to respond forcefully to the targeting of Soleimani, who had survived several assassination attempts against him by Western, Israeli and Arab agencies over the past two decades.

The Quds Force, tasked with carrying out operations beyond Iran's borders, shored up support for Syria's President Bashar al-Assad when he looked close to defeat in the civil war raging since 2011 and also helped militias defeat ISIS in Iraq.

Soleimani became head of the force in 1998, after which he quietly strengthened Iran's ties with Hezbollah in Lebanon, Syria's government and Shi’ite militia groups in Iraq.

His Kataib Hezbollah militia, which received battlefield training from Lebanon’s Hezbollah, has long targeted US forces and was one of the earliest groups to send fighters to Syria to support Assad.

By Ahmed Rasheed and Ahmed Aboulenein/Reuters