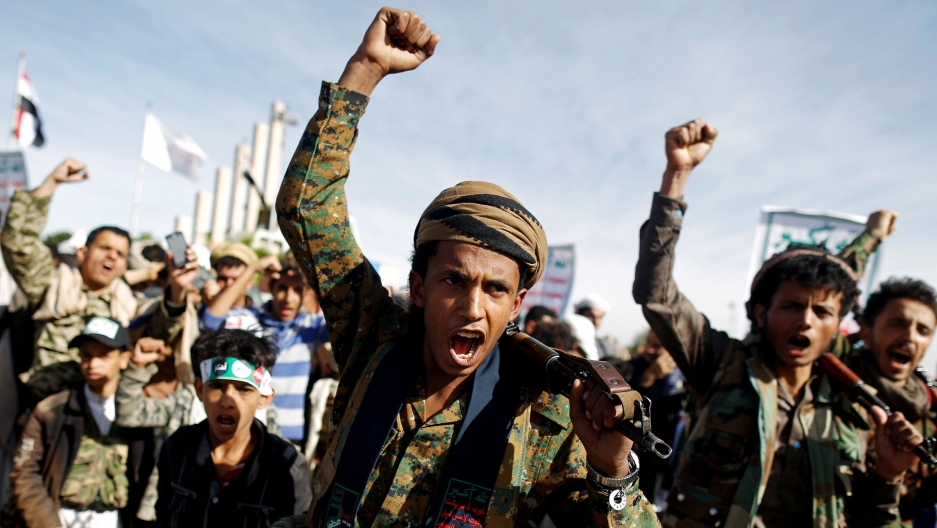 Supporters of the Houthi movement shout slogans as they attend a rally to mark the fourth anniversary of the Saudi-led military intervention in Yemen's war, in Sanaa, Yemen, on March 26, 2019. United States President Donald Trump vetoed on Thursday a congressional resolution to end US involvement in the war in Yemen.

President Donald Trump's second veto of his presidency killed a congressional resolution that sought to end US involvement in the Saudi-led war in Yemen.

"This resolution is an unnecessary, dangerous attempt to weaken my constitutional authorities, endangering the lives of American citizens and brave service members, both today and in the future," Trump said in the veto message.

The resolution passed the House of Representatives in April and the Senate in March, marking the first time both chambers of Congress had supported a War Powers resolution, which limits the president's ability to send troops into action.

Neither the 247-175 tally in the Democratic-majority House nor the 54-46 vote in the Republican-led Senate would be enough to override the veto, which would require two-thirds majorities in both chambers.

Critics say with his veto, Trump is doubling down on a failing policy in Yemen that has extended the four-year civil war and sparked what the United Nations calls the world's most dire humanitarian crisis.

"That war strategy is failing — failing in humanitarian terms, as I saw myself, with widespread malnutrition, the world's second largest cholera outbreak — but it's also failing in political terms, in that precisely the people who President Trump wants to take on — the Iranians and the radicals — they're actually gaining from the war strategy," explains David Miliband, president and CEO of the International Rescue Committee. "That's why the decision of President Trump to stick with this failed strategy is so significant and so damaging."

In February, warring parties in Yemen agreed to start withdrawing forces from the port of Hodeidah under a UN-sponsored deal. Hodeidah, a port city in the northwest of the country, is key to providing food and aid to residents who are in danger of starving.

Related: A troop drawdown could happen in Hodeidah. What does this mean for Yemen?

"Eighty percent of the aid going into the country goes to the port of Hodeidah," Miliband says. "It's a situation where there's strangulation because of the war that's going on around it, there is an inability to get the aid in, never mind the bureaucratic obstacles that are put in place by both the Saudis and the Houthis. We're seeing increasing numbers of people losing their lives — 100 civilian casualties per week in Yemen — most Yemenis being killed at home than in any other place because they are vulnerable to this war."

Miliband said continuing the war in Yemen won't help the situation there.

Shireen al-Adeimi, an assistant professor at Michigan State University, was born in Yemen. She says she wasn't surprised by Trump's veto.

"Many of us have expected Trump to continue to support the Saudis in this brutal war in Yemen," she said. "But I think it's still devastating, given the impact of US involvement in Yemen and this lost opportunity, I think, for the US to finally take some positive steps toward ending this war. So, it's certainly devastating and disappointing, but not unexpected."

She said that increasingly, the people she knows in Yemen view the war as a US-backed war.

"Now many of them see this war as the US' war in their country, as much as it is Saudi's and the UAE's, and so I don't think anybody was really holding their breath," she said. "But certainly there's disappointment because people are still living under miserable conditions. They are still experiencing the devastation of this war. It's affecting their daily lives and this is just one more step that has prevented them from hoping and living in a country where things might get better for them."