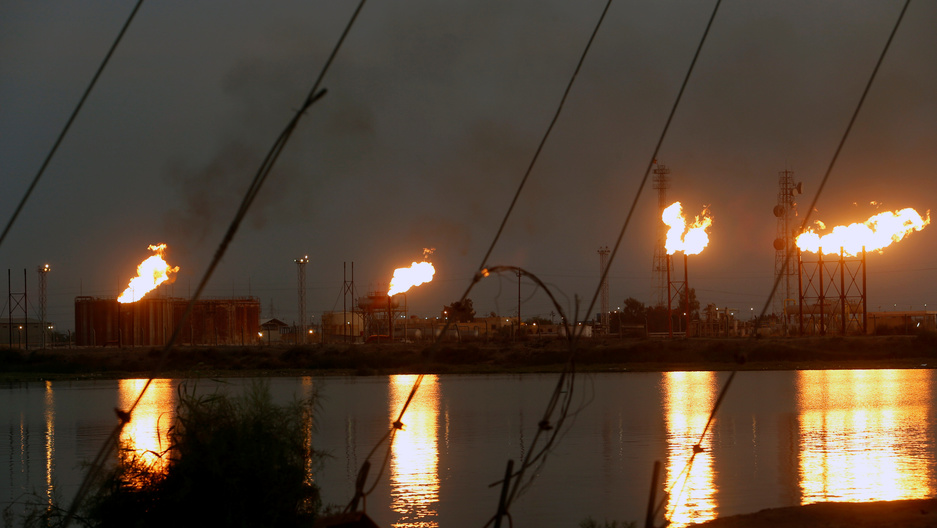 An attack on Saudi Arabia that triggered the biggest jump in oil prices in almost 30 years was carried out with Iranian weapons, a Saudi-led coalition said on Monday, as US President Donald Trump said Washington was "locked and loaded" to hit back.

The Iran-aligned Houthi group that controls Yemen's capital claimed responsibility for the attack, which knocked out more than half of Saudi Arabia's oil production and damaged the world's biggest crude processing plant.

Saudi Arabia oil supply was attacked. There is reason to believe that we know the culprit, are locked and loaded depending on verification, but are waiting to hear from the Kingdom as to who they believe was the cause of this attack, and under what terms we would proceed!

Iran denied US accusations it was to blame and said it was ready for "full-fledged war."

Related: The 'Cold War' between Iran and Saudi Arabia is heating up. Here are five things you should know about it.

The attacks on Saudi oil facilities on Saturday will drive up fuel prices worldwide in the world's largest outage in 50 years.

In the United States, drivers could see gasoline prices at the pump start to rise as early as this week and prices could climb as much as 25 cents this month.

Trump said that he was "waiting to hear from the Kingdom" as to how the US should proceed in response to the attacks that threw the global market into chaos.

The price hike has put US-Saudi relations under renewed scrutiny. Since 1933, Saudi Arabia and the US have engaged in a relationship that has granted significant power to the Kingdom. Their dynamic, in which Saudi Arabia currently appears to have the upper hand, will be a factor in what comes next in the Middle East.

Host Carol Hills spoke with Karen Young, a resident scholar at the American Enterprise Institute, about the consequences of the attacks for US-Saudi relations.

Carol Hills: President Trump tweeted that the US was "locked and loaded" and was awaiting orders from Mohammad Bin Salman. Should we take him literally? I mean, would Trump wait for MBS before he makes his next move?

Karen Young: I think that was an unfortunate choice of words. I think the president probably wanted to demonstrate that we take this attack, threat very seriously. But to put it in the condition of waiting for Saudi Arabia to give a go-ahead certainly made the power dynamic something that it shouldn't be. The United States should be taking the lead, not waiting for Saudi Arabia.

How do you think the US should respond in the wake of these attacks on Saudi oil fields?

I think this is confusing for a lot of Americans right now because they say, "Well, we want to disengage from the Middle East," ... and that's true, but the role of the US in stabilizing global energy markets is a primary security concern [and] it's in our national interest. This is what being a superpower and being the leader of the global economy means — it's that the United States has to take some action to say, "This is unacceptable, this kind of attack," which destabilizes the entire global economy and energy markets. Does that mean starting a global war? No, it doesn't have to mean that. But it has to mean that there is accountability, that there is retaliation.

Do these current circumstances change the alliance between Saudi Arabia and the US? Do they give Riyadh or Washington more leverage in dictating those terms?

This is really tricky because unfortunately the president also tweeted out that he wanted to protect our allies. There is no formal ally agreement between the United States and Saudi Arabia. They were our partners, but they are not officially allies. That the president used that language I think muddies the waters, but there is also this sense that Saudi Arabia is really gunning for war. And I don't think that's necessarily true either. If there were to be a direct confrontation with Iran, and Saudi Arabia had to go at it alone, they wouldn't do necessarily well. And so there is a great deal of tension and apprehension on the Saudi side, "Will the United States step up?" They don't want to be too belligerent and find themselves acting alone. This again points back to the issue of Washington's credibility, the Trump administration's credibility, to follow through on threats. And as we've seen with the negotiations with North Korea, the president tends to back down. And this is [true] for whoever did this attack and if we presume that it was Iran. That's the calculus that they're working on as well.

But North Korea doesn't affect the world on a daily basis in the way that Saudi Arabia does with its oil reserves.

That's absolutely correct. That's true. So this risk is much higher.

Karen, you've noted that the American public hardly has any appetite for any more involvement in war in the Middle East. But given the fact that these attacks are directly affecting Americans because it's about oil, do you think that will have any sway in getting the public behind this?

I think this is a really critical moment for the Trump administration and their communication strategy, which has not always been so smooth. They're going to have to make the argument that this matters, that this matters to US national security interests, that it matters to our ability to project power, and project influence and stewardship of the global economy. And so making that argument, and in getting the facts right and being credible is really their challenge. And I think we all have reason to believe that it might not go well, but it's really important that they try.