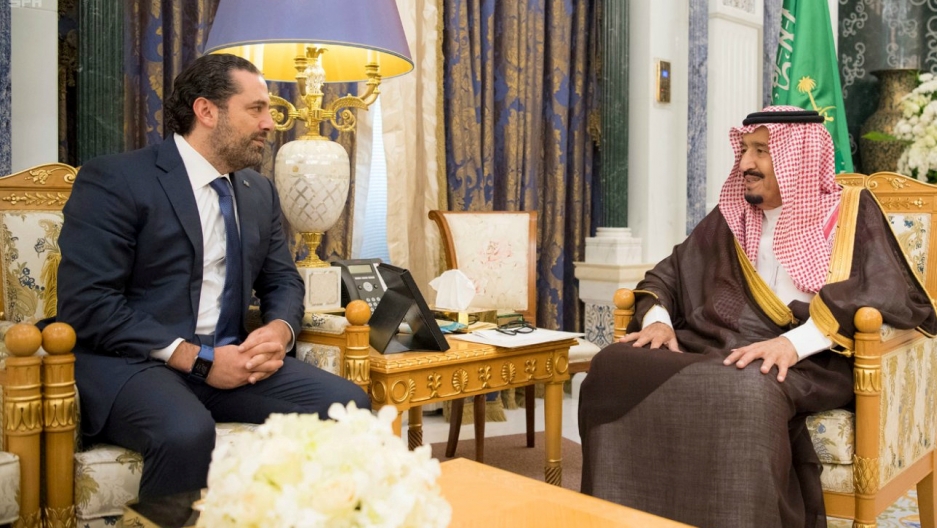 Saudi Arabia's King Salman bin Abdulaziz Al Saud meets with former Lebanese Prime Minister Saad al-Hariri in Riyadh, Saudi Arabia, Nov. 6, 2017. Hariri shocked Lebanon when he resigned on Nov. 4 during a broadcast from Saudi Arabia. He accused Iran of "sowing discord" in the Middle East. Some in Lebanon believe he is being coerced and imprisoned by Saudi Arabia.

From a Yemeni missile attack to the resignation of Lebanon's prime minister, the "Cold War" between Middle East rivals Saudi Arabia and Iran has been heating up.

Experts believe the risk of a direct military clash is low, but why have tensions escalated now and how will the crisis evolve?

Let's look at five questions on the Riyadh-Tehran rivalry and its implications.

What are the origins of the rivalry?

Sunni powerhouse Saudi Arabia and Iran, the predominant Shiite power, have a long-standing rivalry based as much in geostrategic interests as religious differences.

Facing off across the Gulf, the two energy-rich powers have for decades stood on opposing sides of conflicts in the Middle East.

The Iranian revolution of 1979 and the advent of the Islamic Republic — with its fiercely anti-American slant — were perceived as a double threat to the conservative Sunni monarchies of the Arabian Peninsula, allied with the United States.

Saudi Arabia was a key financial backer of Iraqi dictator Saddam Hussein during his 1980-1988 war with Iran.

How have tensions escalated recently?

The latest round of tensions began when Riyadh and Tehran broke off diplomatic relations in January 2016, after Iranians stormed Saudi Arabia's embassy and consulate in response to the execution of a prominent Shiite cleric.

That followed the 2015 nuclear deal between Tehran and six world powers, which Riyadh feared was a step towards ending Iran's international isolation.

Rhetoric between the two grew increasingly belligerent, including over Saudi Arabia's Gulf neighbor Qatar. Riyadh and several of its Sunni allies broke off diplomatic relations with Qatar in June 2017, accusing Doha of support for extremism and links with Iran, claims that it denies.

On the first weekend of November, the animosity reached new heights. First, the Saudi-supported prime minister of Lebanon, Saad Hariri, in a broadcast from Riyadh announced his resignation, blaming Iran's "grip" on his country via Shiite movement Hezbollah.

Related: What the missile strike on Riyadh means

That set off a fierce war of words between Riyadh and Tehran, with Saudi Arabia's powerful Crown Prince Mohammed bin Salman accusing Iran of "direct military aggression." Tehran denied any involvement in the missile attack, with President Hassan Rouhani warning that Iranian "might" would fend off any challenge.

"The main cause of the current tensions is related to the proxy confrontation between Iran and Saudi Arabia," Therme said, pointing to wars in Iraq, Syria and Yemen.

Recent months have seen changes in these confrontations that appear to have brought the tensions to a head.

In Iraq and Syria, the increasingly successful campaign against ISIS has changed the situation on the ground. Offensives in both countries have forced the jihadists from nearly all the territory they seized in mid-2014.

As the threat from a common enemy "has imploded, tensions between these historic adversaries have escalated," said Max Abrahms, professor of political science at Northeastern University in Boston.

As Iraq looks to a post-ISIS era, Riyadh has been taking steps to build stronger ties with the country's Shiite-dominated government. A flurry of visits between the two countries this year saw talk of a warming of ties, including a trip by Prime Minister Haider al-Abadi to Riyadh in late October.

In Syria, meanwhile, the Iran-backed government of President Bashar al-Assad has over the past year managed to reassert control over large parts of the country by defeating, among others, rebel groups backed by Riyadh.

"The Saudi-Iranian rivalry has become the organizing principle for Mideast alliances, reminiscent of how the Cold War divided countries along US and Soviet lines," Abrahms said.

Analysts said the election as US president a year ago of Donald Trump has also contributed to the rise in tensions. Trump's open hostility towards Tehran has "released anti-Iranian energies in the Arabian Peninsula" and emboldened Riyadh, Therme said.

How important is the Sunni-Shiite divide?

The Sunni-Shiite divide between Saudi Arabia and Tehran is a crucial factor in conflicts between the two countries.

Religious tensions have heightened since the 2003 US-led invasion of Iraq that brought the majority Shiites to power in Baghdad instead of Saddam's Sunni-dominated regime.

The 2011 Arab Spring uprisings, which saw Iran support the demands of sizable Shiite minorities in Gulf monarchies, was another turning point, Therme said.

"Arab states appeared vulnerable and Iran was then defined as the main threat to regional stability," he said.

Iran has even called into doubt the suitability of the Saudi royal family to serve as custodians of Mecca and Medina, the holiest cities in Islam — especially after a stampede at the annual hajj pilgrimage in 2015 left hundreds of Iranians dead.

How will the crisis evolve?

While the increase in tensions has raised serious concerns, few expect an outright military confrontation.

"A broader regional conflict remains unlikely," said Graham Griffiths, a senior analyst at consulting firm Control Risks, saying Riyadh would instead look to use the latest missile incident to push for further sanctions against Tehran.

Therme agreed that both sides would steer clear of open conflict.

"Iran has experience of the war with Iraq ... and Saudi Arabia is bogged down in Yemen, after failing to define the future of the Syrian revolution ... and counter Iran's influence in Iraq," he said.

Prince Mohammed is looking to "leverage the nationalist rhetoric to solidify his position" as he pursues an anti-corruption purge some see as an attempt to cement his hold on power, the group said.

"At the same time, escalatory statements against Iran help shift the media attention away from the domestic power struggle," it said.