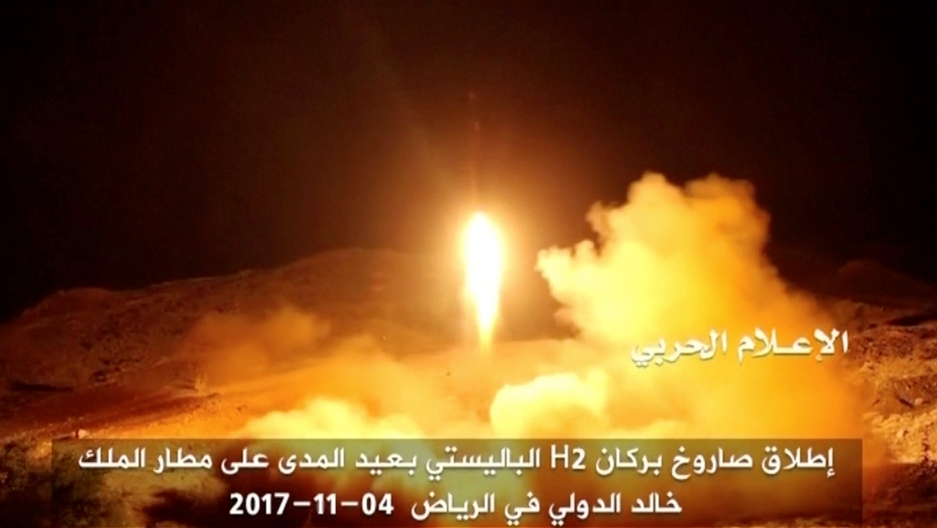 A still from a video distributed by Yemen's pro-Houthi television station shows what it says was the launch, by Houthi forces, of a ballistic missile aimed at Riyadh's King Khaled Airport on Saturday.

Saudi Arabia has been dropping bombs on Yemen's capital city for 32 months. On Saturday, Yemen fired back.

The missile, identified by Yemeni rebels as a domestically built Burkan II ballistic missile, also known as a Volcano, was blown out of the sky above King Khalid International Airport by an American-made anti-missile defense system. No injuries were reported, but this was a significant event in the ongoing Yemen war.

What the missile represents depends on whom you ask.

Yemen will destroy Saudi Arabia. Do not stand in our way. pic.twitter.com/UCIVkyICbA

For the Yemen Houthis rebel group who took credit for the launch, the Burkan II strike demonstrated their ability to reach a target 600 miles inside the Saudi Kingdom. This was the 77th missile the Houthis have fired on Saudi Arabia, but only the first to reach the airspace over Riyadh.

For Saudi Arabia, the attack represented an act of war. And Saudi media were quick to pin the blame on Saudi Arabia's regional rival, Iran. The Saudi Foreign Minister, Adel Jubair, told CNN, "Iran cannot lob missiles at Saudi cities and towns and expect us not to take steps."

And for Human Rights Watch, the Yemeni rebels targeting Riyadh's main airport was likely a war crime, and not the first to be committed since war broke out in 2015.

"Retaliation against civilians is prohibited," says Kristine Beckerle, an investigator and spokesperson for Human Rights Watch. Beckerle has investigated civilian deaths in Yemen, many the result of bombing raids by Saudi Arabia and the United Arab Emirates. "It is true, yes, that the Saudi-led coalition has carried out scores of unlawful attacks on Yemen including killing many, many, many civilians," she says, "but that does not justify the Houthis launching a missile at a civilian target in Saudi and endangering Saudi civilian lives."

But the Saudi response to the strike is ratcheting up a conflict that has caused what the United Nations calls the worst humanitarian crisis on earth. The next day, coalition jets struck civilian targets in Yemen.

"In response to the attack [the Saudi-led coalition] closed off all entry points to Yemen," says Beckerle. "That means land, sea, air — nothing was going in or out." Yemenis rely on imported food and fuel, and the closure of Yemen's border, its airports and seaports has halted the flow of humanitarian relief aid.

With 17 million Yemenis food insecure, cutting off humanitarian aid will have consequences. Humanitarian groups have been sounding the alarm.

UN official says Saudi blockade could leave hundreds of thousands of children in Yemen on brink of starvation. https://t.co/1y8aMznBSg

"'I'm watching what's going on in the region over the last couple of days with extreme alarm because we've already seen these moves," says Kristine Beckerle. "After this weekend you had Donald Trump tweeting that he is supporting the Crown Prince and King Salman in terms of their latest moves internally in Saudi," she says.

"And I'm sitting here wondering when, if ever, the US or the UK are going to come out and say something along the lines of 'We're very concerned about the recent attacks on Yemeni civilians by coalition airstrikes."