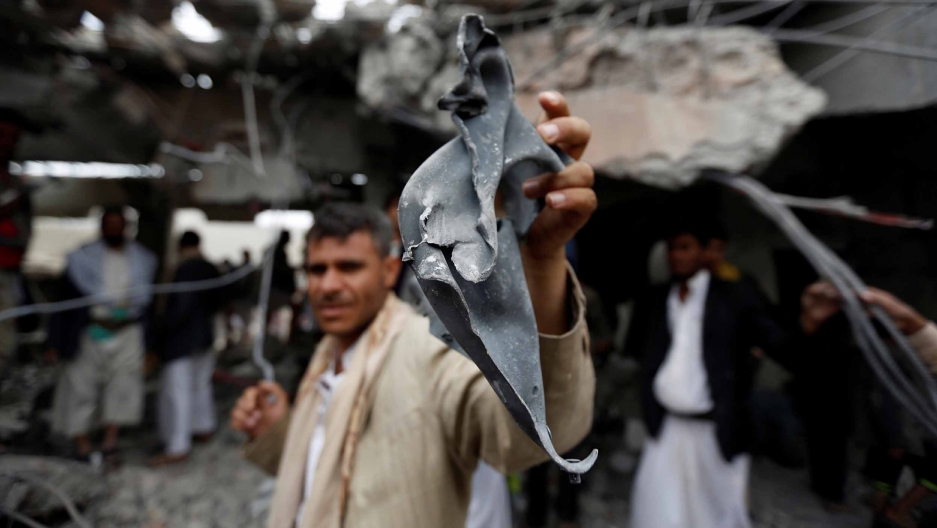 A man shows a fragment of a missile he picked up at a building destroyed by Saudi-led air strikes in the northwestern city of Amran, Yemen, in September 2016.

Saudi Arabia has led the world’s nations in buying weapons for the past two years. And where do most of these weapons come from?

According to the Stockholm International Peace Research Institute (SIPRI), 70 percent of Saudi's arsenal now comes from the United States. SIPRI tracks transfers of major weapons and is one of few organizations to do this.

Saudi Arabia's appetite for weapons has grown as its regional ambitions have increased. The ongoing war in Yemen, and concern about Iranian influence, are both reflected in increases in weapons purchases by the Saudis over time.

"There's been a very significant growth in arms supplies to Saudi Arabia by the US," says SIPRI's Pieter Wezeman, a senior researcher and Middle East specialist. "To Saudi Arabia, the US supplies a very wide range of arms. The most important types of arms include combat aircraft, tanks and missiles. It includes very advanced sensors and intelligence gathering equipment, often on planes. In the coming years, it will also include frigates and other ships. So, really, the whole package of weapons which Saudi Arabia wants to have is what the US is willing to supply and already has supplied."

This is how Saudi purchases of American-made weapons have grown over time:

But to help visualize this another way, we converted the data to sound.

Wezeman says his concern is less about the amount of weapons the Saudis are buying and more about the fact that they are being used in battle.

"We don't have a nice Saudi Arabian defense whitepaper which clearly explains why they want to have all these arms," he says. "We have to look at how they behave, statements made here and there by important Saudi Arabian people, in particular, the crown prince. And it is quite clear that the prime motive of motives for Saudi Arabia are that it wants to be a regional power and that weapons are considered an important tool for becoming that, and that it sees Iran as an important competitor in that struggle for regional power."

The war in Yemen has been going on for four years.

Saudi Arabia and its partner, the United Arab Emirates, have relied heavily on airstrikes to try to defeat the rebels, known as the Houthis, who took over Yemen. While the Houthi uprising began as an internal struggle between Yemenis, the entry of regional powers Saudi Arabia and the UAE in 2015 widened the conflict. Over time, the Houthis have gradually intensified their offensive against Saudi Arabia, incorporating increasingly sophisticated missiles.

The US believes the missiles come from Iran. Last year, one of those Yemeni-launched missiles struck the international airport in Riyadh, the Saudi capital. It killed one person, a construction worker from Egypt.

"What would have happened if one of those ballistic missiles would have killed many hundreds or if it would have killed a high-level royal family member?" Wezeman asks. "Would then Saudi Arabia believe that now we have the tools, we have those advanced arms, and Iran does not have them? Now we can actually take military action against Iran to punish them? And if that happens, how would that escalate?"