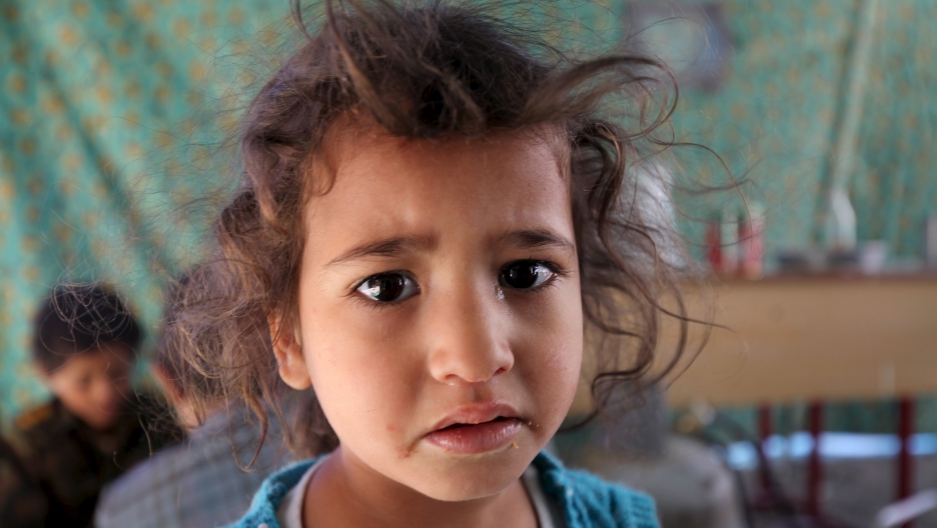 An internally displaced girl waits for her turn to receive food at a school in Sanaa May 17, 2015. Residents were forced to leave their homes in the nearby province of Saada amidst Saudi-led air strikes.

Cluster bombs have been banned by 116 countries. Yet one cluster weapon, made in America, is being used on the battlefield in Yemen, dangerously close to civilians.

A Yemeni man described the chaos that accompanied an air strike near his village on a Monday morning in April, the day of the weekly market.

"Hundreds of people from the surrounding villages were in al-Amar when the bombs were dropped," he told Human Rights Watch. "When people saw the parachutes they fled, leaving all their produce, cars and livestock. I went to find out what the parachutes had dropped. I do not know what it is, but I thought it was important to keep away from children who might play with it."

He told Human Rights Watch he'd heard that the attack had wounded two people. HRW confirmed that several people injured in the incident were treated at a local hospital. The objects the Yemeni man discovered on the ground were later identified by HRW as parts of a US-made weapon, the CBU-105 Sensor Fuzed Weapon from Textron Systems of Wilmington, Massachusetts.

When the 2008 Convention on Cluster Munitions came into effect in 2010, this particular weapon looked to have skirted the ban. Textron included safeguards never before seen in a cluster bomb, which it said would prevent civilian harm by eliminating the hazard of unexploded ordnance. Even so, weapons experts and anti-cluster bomb activists agree that the CBU-105 SFW is indeeed a cluster bomb. In fact, the US Department of Defense has called it that.

But Textron describes it differently. Company literature presents the CBU-105 SFW as a “smart air-to-ground area weapon designed to defeat moving and fixed targets on land and at sea. With several proven features to prevent hazardous unexploded ordnance, the SFW is the only weapon of its kind in the US Air Force inventory.” The weapon, delivered by a warplane such as an F-15 fighter jet, can destroy enemy concentrations of military vehicles and equipment in a single pass.

It’s in the inventory of two countries whose planes have been bombing Yemen. Saudi Arabia and the United Arab Emirates have spent hundreds of millions of dollars on SFWs from Textron with US government approval. When these two nations started to stockpile SFWs several years ago, each weapon cost about $360,000. This year the Saudi-led air campaign against Yemen’s Houthi rebels began to use the weapon in the Houthis' home province of Saada, near the Saudi border. This has been raising concerns among human rights workers and causing panic — and perhaps some injuries — among Yemeni civilians.

This sales video shows how the CBU-105 SFW works.

After the CBU-105 SFW is dropped from a plane, it releases 10 cylindrical shells with their own parachutes and rocket engines. Inside each of the 10 parachuting canisters are four hockey puck-shaped explosives called "skeets," rigged with smart electronics to guide them to targets, seeking battlefield equipment such as tanks, trucks, armored personnel carriers, and missile launchers. The skeets are programmed to recognize and lock onto military hardware, then go destroy it.

If any of the 40 explosive skeets do not find a target, Textron has programmed them to either deactivite within eight seconds of launch, detonate harmlessly 50 feet above the ground, or switch themselves off after they land. These safety features are included to overcome the key objection to cluster bombs: that unexploded ordnance on the ground can kill and injure civilians after the fighting is over. The CBU-105 SFW is designed to leave nothing behind that can explode.

A photo taken in the northern Yemeni province of Saada in late April, and posted on Twitter, shows one of the 10 cylindrical shells (called a BLU-108) from a CBU-105 SFW with its four explosive skeets still attached.

The weapon, in this case, did not work as designed. Jeremy Binnie, Middle East Editor for IHS Jane's Defense Weekly, says the field photos show that the weapon malfunctioned, but he adds, "the triggering mechanism will no longer work after a certain amount of time. So, in theory, the explosive charges that you see in those pictures [are] no longer effective. Obviously from an unexploded ordnance disposal point of view, then, that is still something you have to deal with, and you have to be cautious around that."

Anti-landmine activist Rae McGrath has written "the metal content would make this weapon a target for scavenging." In his 2008 paper critical of the weapon's performance in Operation Iraqi Freedom, McGrath highlighted a variety of ways in which the CBU-105 SFW had failed to detonate on the battlefield. He cast doubt on the claim that all undetonated skeets will self-neutralize, noting that while the manufacturer says they are automatically rendered inert after landing on the ground, "given that many of the submunitions appear to have failed to operate as designed, this is not a safe assumption."

When asked to comment on the apparent failures of the CBU-105 SFW, Thomas Williams, a senior public relations specialist for Textron, wrote that his company “does not comment on customer applications of our products in their military and security operations.”

In 2011, when the US managed Saudi Arabia's purchase of 1,300 CBU-105s from Textron, the transaction included a written agreement that "cluster munitions will only be used against clearly defined military targets and will not be used where civilians are known to be present or in areas normally inhabited by civilians." Yet reports from northern Yemen show that the CBU-105 SFW — and other less discriminate cluster munitions — have repeatedly been used in the Yemen war in areas that are inhabited by civilians.

In May, Human Rights Watch documented the use of three varieties of cluster munitions in Yemen, two known to be made in the US. Researchers for Amnesty International found more evidence, also in northern Yemen, in June and July.

13 yo Mohamed, IDP from #Saada, broke his leg walking thru a field of #Cluster submunition in #Safra #YemenCrisis pic.twitter.com/pGJgro5YqR

Saudi Arabia has acknowledged using the CBU-105 in Yemen, but in an interview with CNN, Brig. Gen. Ahmed Asiri, a Saudi military spokesman, said it was used "only against armored vehicles."

Congressman Jim McGovern is a co-sponsor of the Cluster Munitions Civilian Protection Act, a bill he has been working to turn into a law since 2007. It would require that cluster munitions have a failure rate of no more than 1%, and that each purchaser of US cluster munitions refrain from using them where civilians could be harmed.

Bill intro’d by @RepMcGovern to limit use of cluster munitions http://t.co/ueDhrVxsoX

While the bill has stalled every year, the Massachusetts Democrat and his co-sponsors of the Cluster Munitions Civilian Protection Act, US Senators Patrick Leahy (D-VT) and Dianne Feinstein (D-CA), have had success inserting this language into annual omnibus bills. Each time the Defense Department brokers the sale of a cluster munition, the same limiting language is inserted in the agreement.

But following the HRW report, McGovern said, "You know, I'm for banning these weapons, and the best we've been able to do is to put some rules and regulations around their export and how they're used, and clearly that's not enough." In a tone of frustration, he continued, "Do we just throw up our hands and say it's too bad [the Saudis] didn't comply with US law, and oh boy that's just tough? Or do we actually make sure that our laws mean something? I think if a country violates the law, and uses these weapons in the way that the Saudis did, they ought not to get any more."

Sales of weapons to all foreign countries, including Saudi Arabia, are managed by the Defense Department, which is not rushing to pass judgement on the use of American-made cluster munitions in Yemen.

Army Lt. Col. Joe Sowers, a Department of Defense spokesman, wrote, “We share concerns regarding harm to civilians caused by the use of cluster munitions. We remain the single largest financial supporter in the world of humanitarian efforts to address the impacts of the explosive remnants of war. We take all accounts of civilian deaths due to the ongoing hostilities in Yemen very seriously. We call upon all sides of the conflict to comply with international humanitarian law, and to take all feasible measures to minimize harm to civilians."

The US State Department, also contacted for this report, echoed the official language, but added, “We take claims of misuse of US munitions seriously.”

Misuse of US weapons may be the strongest argument in Congressman McGovern's arsenal. He speaks frankly about holding the Saudis accountable for breaching rules set out at the sale of the CBU-105 SFWs.  “If we have evidence that countries are not complying with US law, that ought to be enough to say we sell these weapons to them no more. Period. End of story."

McGovern says he wants to see the United States agree to an outright ban on all cluster munitions, as many countries already have. Referring to the HRW report, the congressman wrote, “This … is a powerful reminder that cluster munitions have no place on the battlefield. The indiscriminate use of cluster munitions and the danger they pose to civilians is unacceptable and with this report we are seeing the human cost. In today’s conflicts, with a rapidly moving front line or no front line at all, cluster munitions can also pose a risk to our own troops or those of our allies."

The congressman adds, "The US has a responsibility to ensure that the nations we export cluster munitions to comply with restrictions on prohibiting their use in areas where civilians might be harmed. I believe we need to join the international community and ban these dangerous weapons to protect our troops, our allies and innocent civilians around the world.”

By May, 116 countries had joined the 2008 Convention on Cluster Munitions. Not among them: The United States, Saudi Arabia and the United Arab Emirates.

CORRECTION: An earlier version of the story mistakenly characterized the CBU-105 SFW weapon's relationship with the 2008 Convention on Cluster Munitions. The weapon is not compliant.

Readers, what do you think of this story? Do you support Rep. McGovern's effort to limit the export of this weapon, or do you think this is an issue that needs no government intervention? Let us know in the comments section below.

UPDATE: A previous version of this story included a promotional video of the CBU-105 from Textron. The company has since removed this video from YouTube, and we have found an alternate source of the video.