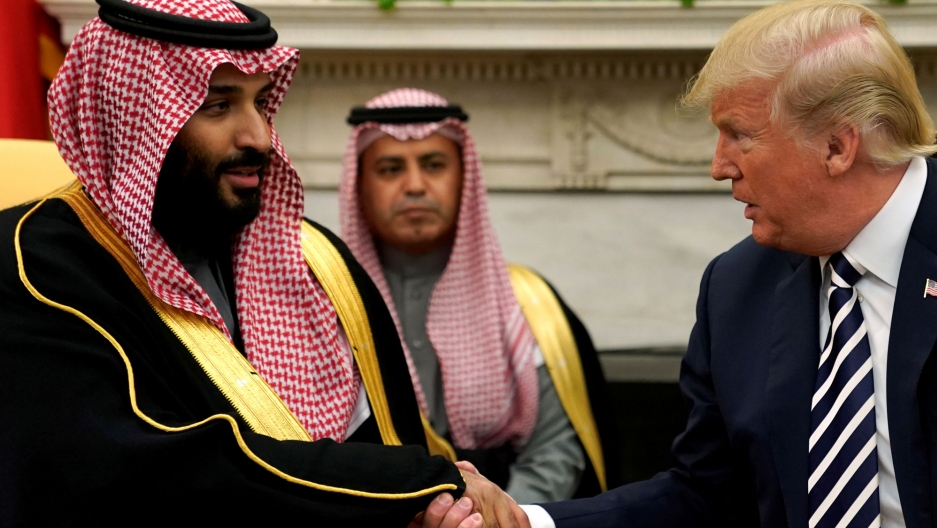 But there is backlash underway. Germany has announced, in light of the scandal surrounding the Khashoggi murder, that it is putting all weapons sales to Saudi Arabia on hold.

When Trump spoke to reporters Tuesday, he talked about the "hundreds of billions of dollars in orders" from Saudis to American companies. And he translated that into US jobs — hundreds of thousands, he said. Last month, Trump said that cutting off ties with Saudi Arabia would cost America jobs — lots of them.

But 600,000 is likely an overstatement.  Some experts count the number of US jobs dependent on Saudi Arabia as much, much lower.

"I don't think the president knows how many jobs are connected with arms sales to Saudi Arabia,” says William D. Hartung, director of the Arms and Security Project at the Center for International Policy. “He said there's a million jobs, 500,000 jobs. When he met with Mohammed bin Salman in the White House he had a chart that said 40,000 jobs. My estimate is it could be half of that.”

“If you look at sales to Saudi Arabia in terms of deliveries that happen every year,” he says, “that's about $2.5 billion a year, a couple of percentage points of what the Pentagon spends on weapons.”

The Saudis buy all kinds of military hardware from the US. F-15 fighter jets from Boeing, helicopters from Boeing and Sikorsky, combat ships from Lockheed Martin, laser-guided bombs from Raytheon. These are just the big-ticket items.

Donald Trump's statement suggested that if US companies were to stop selling to the Saudis, then China and Russia would fill the void. And that is without a doubt true. But in the short term, says Hartung, replacing US weapons systems would be very, very difficult for the Saudi military.

Saudi Arabia may need the US more than the United States needs the Saudi Kingdom.

While the president correctly says Saudi cash produces US jobs, the number of jobs is in the tens of thousands — not the hundreds of thousands that Donald Trump has claimed.

Were the US to stop weapons production for Saudi Arabia, the pinch would be felt in a few production centers, such as St. Louis, where F-15 fighter jets are still being made and Tucson, Arizona, home of Raytheon’s largest bomb and rocket factory. A freeze on Saudi weapons sales could halt production there, but Hartung believes employees would likely be reassigned to other work.

“In Tucson, for Raytheon, they're building bombs for all the different US conflicts that are going on, selling to the Pentagon,” says Hartung. “So, a setback on their sales to Saudi Arabia would be more of a hiccup for them.”

Germany will end all arm sales to Saudi Arabia & ban the 18 Saudi linked to Khashoggi's murder from entering Europe.
Merkel is the leader of the free world.
A year ago Trump defended Nazis, after they had murdered Heather Heyer
Now, he defends a murderer. https://t.co/pC98Lmk9z6

In contrast to Angela Merkel’s hold on weapons deliveries to Riyadh, the Trump Administration has shown no sign that it intends to disrupt the flow of US weapons to the Saudi Kingdom. Since the murder of Jamal Khashoggi on Oct. 2, the Department of Defense has announced five new defense contracts with Saudi Arabia. The most recent one was on Monday, Nov. 20.