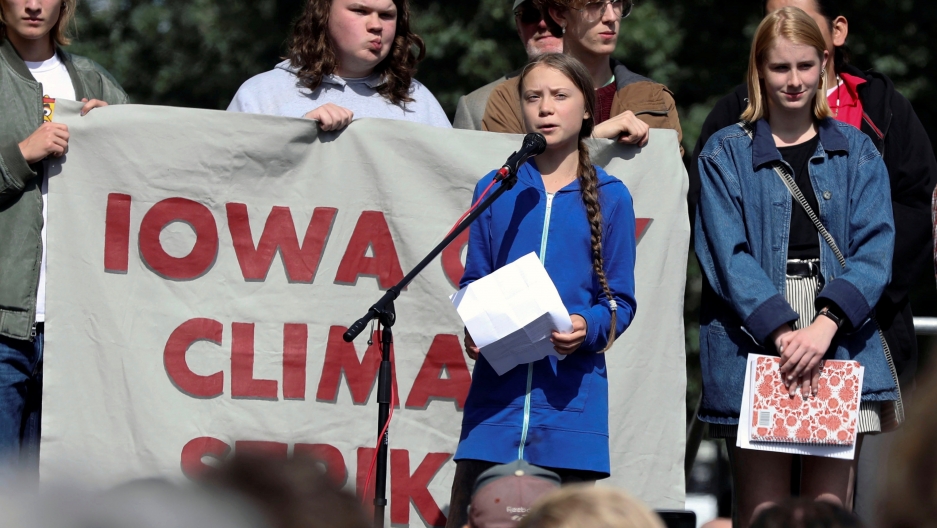 In just 14 months, Greta Thunberg has gone from a lone schoolgirl striking outside the Swedish parliament to an international celebrity.

The favorite to win Friday’s Nobel Peace Prize has inspired books, met with heads of state, and testified before Congress, the European Parliament and the United Nations. Her Friday school strikes for climate action have expanded to millions of people around the world.

Related: A Nobel for Sweden's Greta Thunberg? A tough decision for the prize committee.

She’s not the first environmental activist with a clear message and quotable speeches. So, why has she risen so fast to fame? One obvious reason is her age.

The 16-year-old speaks with the moral authority of someone who will be around long enough to live through the worsening impacts of climate change.

“You have stolen my dreams and my childhood with your empty words,” Thunberg said at the United Nations General Assembly last month.

Her eyes filled with angry tears as she aimed a searing indictment at world leaders gathered there.

"You are failing us. But the young people are starting to understand your betrayal. The eyes of all future generations are upon you. And if you choose to fail us, I say: We will never forgive you.”

"You are failing us. But the young people are starting to understand your betrayal. The eyes of all future generations are upon you. And if you choose to fail us, I say: We will never forgive you.”

Thunberg told the BBC she learned about climate change when she was just 8 and didn’t understand why more wasn’t being done about it. She said she eventually stopped eating, mostly stopped talking and grew increasingly lonely.

Related: Only 20 Nobels in the sciences have gone to women. Why?

“It felt like I was the only one who cared about the climate and ecological crisis,” she said.

She convinced her parents to stop eating meat, and got her mom, a well-known opera singer, to agree to stop flying.

In August 2018, Thunberg took her activism public.  Armed with a simple black-and-white sign, she started skipping school to strike in front of the Swedish parliament ahead of elections there. Schoolkids around the world quickly started organizing their own strikes.

“It makes me feel good that I’m not alone in this fight, and it feels like my life has gotten some kind of meaning lately,” Thunberg told the BBC.

She is definitely no longer alone.

Thunberg spoke that day in New York City, where a crowd chanted her name and little girls wearing homemade T-shirts paying homage to Thunberg pressed against the police barriers at the front of the crowd.

“One reason that I think why Greta became so famous so fast is that there was already dissatisfaction with ongoing climate politics in general.”

“One reason that I think why Greta became so famous so fast is that there was already dissatisfaction with ongoing climate politics in general,” said Katrin Uba, a professor at Sweden’s Uppsala University and Estonia’s University of Tartu who has been studying Thunberg’s impact since this spring.

Mass climate protests and marches had already started by the time Thunberg began her strikes. And just two months after they started, a landmark UN report painting the most dire picture yet of climate change was published.

“But also, the fact that she started something different,” Uba said. “She started a unique way of protesting, using school strike[s].”

The idea resonated with teenagers around the world.

“When I heard ‘school strike for climate,’” said 17-year-old activist Xiye Bastida, “the sound of it was so powerful. So, that’s why I was so eager to be part of it.”

Bastida started striking in New York in March. The first time she saw Thunberg speak in a TED Talk, she said she was inspired.

“The fact that she was 16, and I was 16 as well, and she could do such amazing things and change the world, it made me think we can all do it as well,” Bastida said.

But Thunberg is not the first young person to take a stand against environmental injustice.

And many who came before have been Indigenous activists and activists of color.

“There are all these really tremendous activist leaders who are similarly positioned to Greta Thunberg, but who haven’t gotten the spotlight,” said Joe Curnow, an assistant professor at the University of Manitoba who’s been studying the youth climate movement for five years.

The US youth climate movement has many young women of color at the helm, including Jamie Margolin, co-founder of the Zero Hour movement, Isra Hirsi, executive director of the US Climate Strike, and countless others.

“So, I’m like, why Greta? And I think that has a lot to do with questions of race and racism. I think her whiteness is very much an asset for why the media, why governments, why the UN has been willing to feature her.”

“So, I’m like, why Greta? And I think that has a lot to do with questions of race and racism,” Curnow said. “I think her whiteness is very much an asset for why the media, why governments, why the UN has been willing to feature her.”

The environmental movement, overall, has been criticized for being too white for a long time. The spotlight on Thunberg may be an opportunity to change that, argues longtime environmental justice activist Mustafa Santiago Ali, who spent years at the Environmental Protection Agency and is now with the National Wildlife Federation.

“I hope as much attention will be given to a number of kids of color who have been literally, not just standing on the front lines, but living in the front lines for decades now,” Ali said.

Thunberg has tried to share the spotlight. This week, she visited the Standing Rock Indian Reservation to show solidarity with Indigenous activists, and routinely mentions in speeches that those on the front lines of climate change are feeling its effects more acutely than her.

“She as a person is so conscious of her role right now, and she uses that to lift other voices,” said New York teen climate activist Bastida.

Bastida said her co-organizers in the youth climate movement do talk about Thunberg and race.

“It is something that comes up a lot, the fact that Greta is a white, [privileged] girl,” Bastida said. “But we are not resentful at all. We just are thankful that the movement has gotten to where it has needed to be for a long time.”

Is that an achievement worthy of a Nobel Peace Prize? The award will be announced Friday.