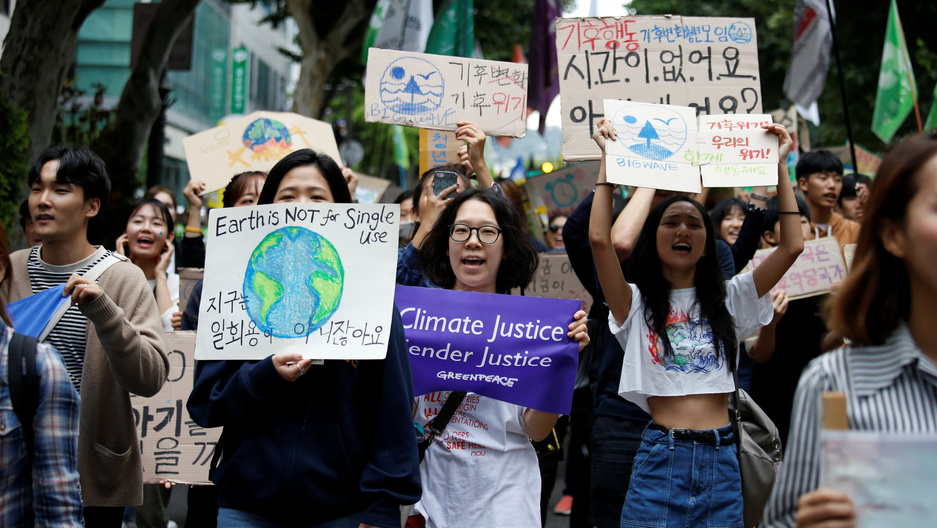 Children all over the world are stepping up to tackle climate change. Millions of young people flooded the streets of cities around the world on Friday with protests continuing into this week's UN General Assembly to demand political leaders take urgent steps to stop climate change, uniting in a worldwide protest inspired by 16-year-old Swedish activist Greta Thunberg.

Alarmed by images of the Greenland ice sheets melting and the Amazon rain forests burning, students and workers abandoned schools, shops and offices in nearly every corner of the globe, aiming to stop what they see as a looming environmental catastrophe.

“Right now we are the ones who are making a difference. If no one else will take action, then we will,” Thunberg told tens of thousands of protesters gathered at a park with a view of the Statue of Liberty in New York on Friday.

Carol Hills: Dr. Bernstein, a big factor you point to is pollution and how it can affect children's developing lungs and brains. Are we seeing this play out already?

Aaron Bernstein: We are. We've known for a long time that air pollutants were bad for lungs. Kids who have asthma have a hard time breathing, as do adults who have lung problems. The more we learn about air pollution the more we realize it doesn't really care which organ it gets to. We have pretty good evidence that it can damage developing brains. It may be causing Alzheimer's disease over the lifespan and there's even some preliminary evidence that shows that air pollution may be a factor in autism.

In your research do you find economic, or social disparities, and who will be affected the most?

We know that these air pollutants ... harm poor people and people of color in the United States more than others.

Because it turns out that if you're going to buy a house, you don't necessarily want to buy it next to the freeway or next to the industrial plant. That means that people don't pay as much. And if you're poorer, you tend to buy houses closer to those areas. That's just one example. We see a real opportunity here with stopping burning fossil fuels and addressing some of the big health problems we face.

What's the connection to obesity?

We know that getting more exercise, which means walking and bicycling more, or even taking public transit, as opposed to sitting in cars, is good for fighting obesity. We know that eating less red meat and potentially higher fat animal products is bad for obesity, and eating more plants is good for combatting obesity. All these things are also good for reducing carbon. If we provide better access to affordable public transit and get people and children out of sitting in cars, and if we give children places to play outdoors in green spaces, it's good for air pollution, good for sequestering carbon and we can, in fact, address obesity.

What about mental health impacts? What are you seeing in terms of children?

We've had the misfortune of watching disasters unfold — disasters associated with climate change. We've seen in children around the world and in the United States that when children have to deal with these disasters, it not only can affect their mental health in the near-term, but for a long time. Children who were affected by Katrina were followed for years out and we see increased rates of certain mental health symptoms in them. We know that in a child who experiences these so-called adverse childhood events, that the more of them a child gets, the more likely [the effects] can affect things beside [the children's] mental health across their lifespan. They may die earlier, they may have higher rates of cancer, and they may engage in more risk-taking behavior. These form a part of what we pediatricians call ACEs, or adverse childhood events, that through toxic stress, can lead to adverse health outcomes. At the same time, the solutions to climate change, including things like improving green space in cities, have been shown to have tremendous benefits to childhood mental health.

Those Danes and the rest of the Scandinavian countries — they're always doing the right thing where this is concerned — but I'm wondering if there are other places around the world, cities or whole countries, that are taking these kinds of steps to address health effects and children.

Yeah, it's wonderful to see that at any number of places around the world people are really engaged on climate. In the United States, we see cities and states doing tremendous things around what they want to do for energy production, food systems and transportation. But I think your question is well taken, which is that we don't necessarily think about children when we do these things. I think that's why the climate strikes that happened this past week were so important because our children were calling us to account. And so when we look at any policy at any state or local level we often ask, "What does this mean to adults?" But we don't ask what it means to our children. If I could make anything clearer, it's that we have to be thinking about our children whether we're dealing with the acute effects of air pollution in our cities today, and the disproportionate impact they have on children, or for the long-term, and the carbon pollution and what that means to the world we want our children to live in.