Demonstrations that started in the Pacific islands followed the rising sun across Australia, Japan, Southeast Asia and then on to Europe, Africa, the Middle East and the Americas.

Thunberg, who soared into prominence after sailing across the Atlantic in an emissions-free yacht ahead of the summit, was in New York to headline a massive rally in Lower Manhattan ahead of next week's climate summit at the headquarters of the United Nations.

"She's like the icon of our generation," New York protester Fiamma Cochrane, 17, said of Thunberg. 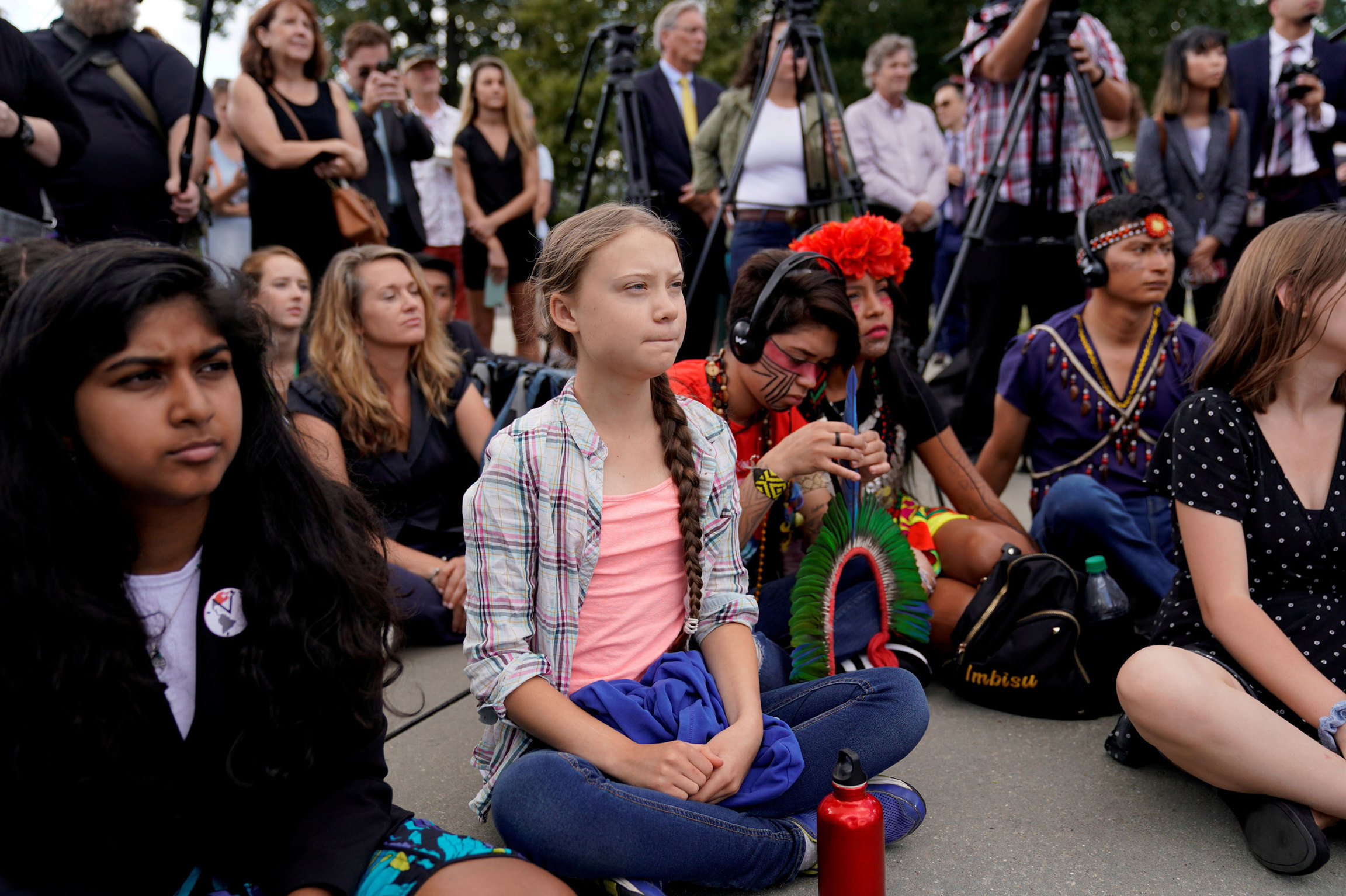 Demonstrators in Paris raised a painting of Thunberg in an image of the Virgin Mary, a halo around her head reading, "Our house is on fire."

Alarmed by images of the Greenland ice sheets melting and the Amazon rain forests burning, the protests highlighted the leadership role of young people in the international cry to reduce consumption of fossil fuels.

Worldwide concern has escalated since US President Donald Trump abandoned the international Paris Accord on climate change and took a series of steps to dismantle environmental protections including moving on Thursday to block stricter vehicle emissions standards in California. 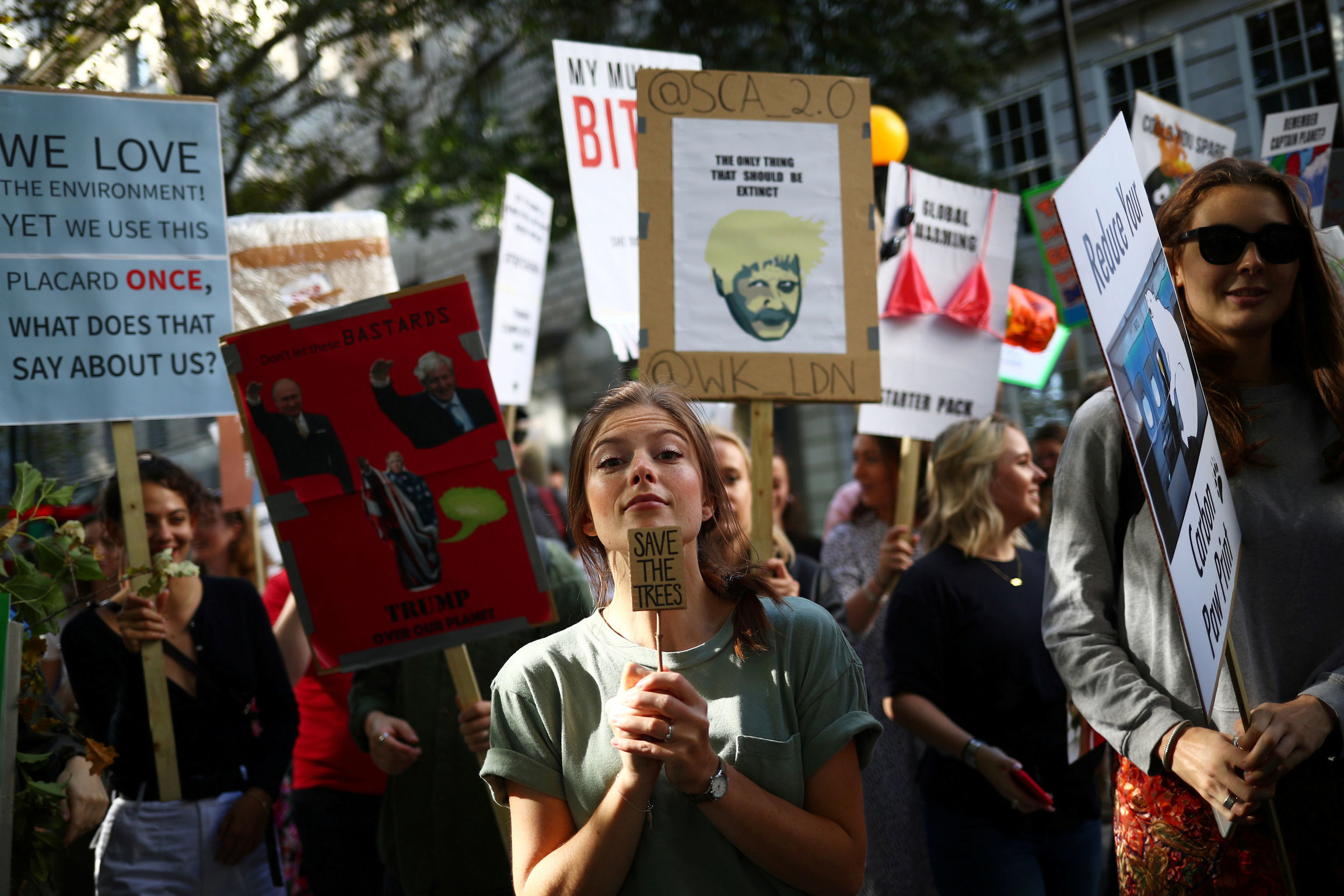 "Save our planet!" marchers roared while parading from an area near Wall Street to a harborside park with a view of the Statue of Liberty. Thunberg, who tweeted pictures from the march, was scheduled to address the gathering. 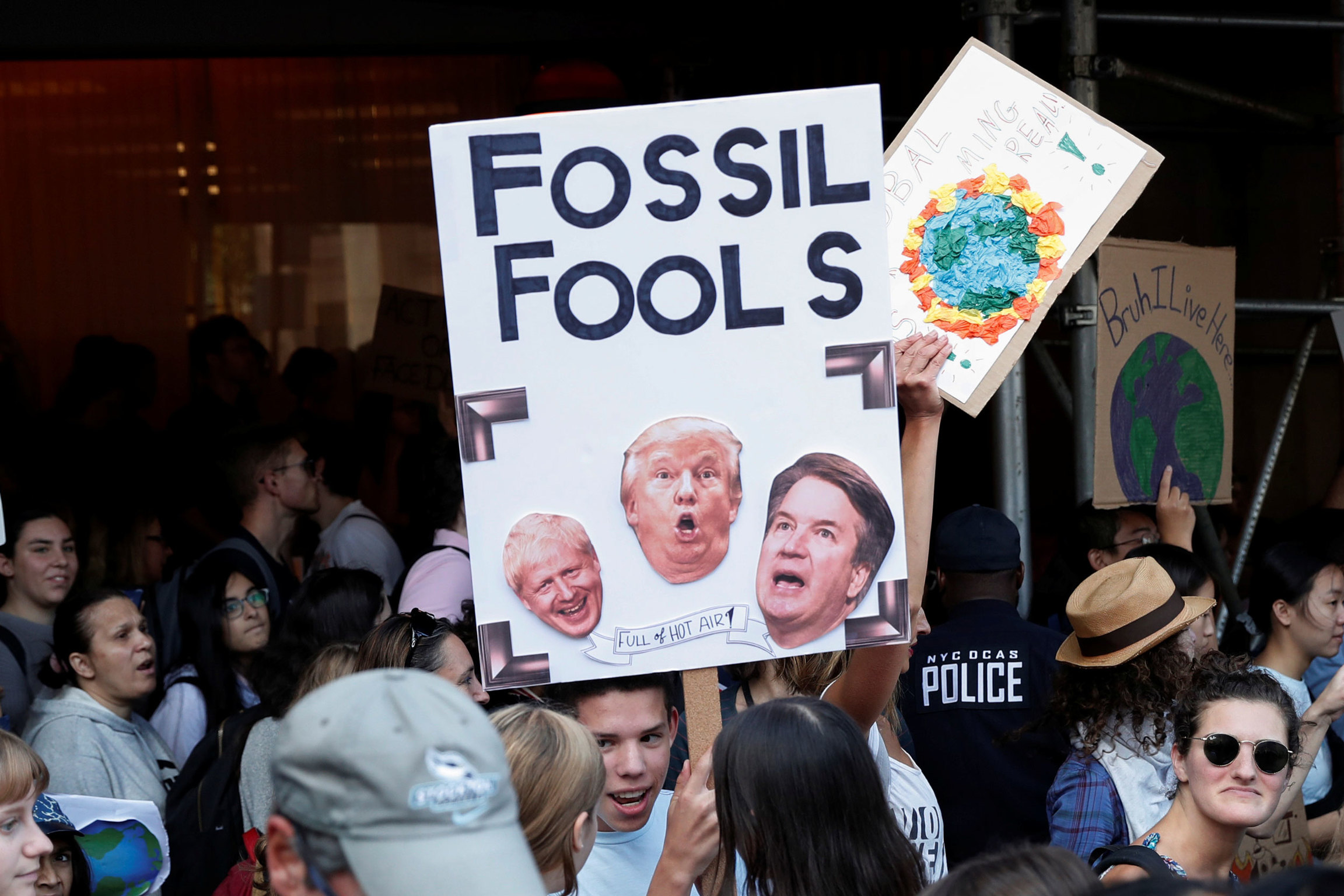 Activists take part in a demonstration as part of the Global Climate Strike in Manhattan in New York, Sept. 20, 2019.

Demonstrators gathered in Lower Manhattan and marched about a mile to Battery Park at the edge of the financial district for a rally featuring speeches and music. 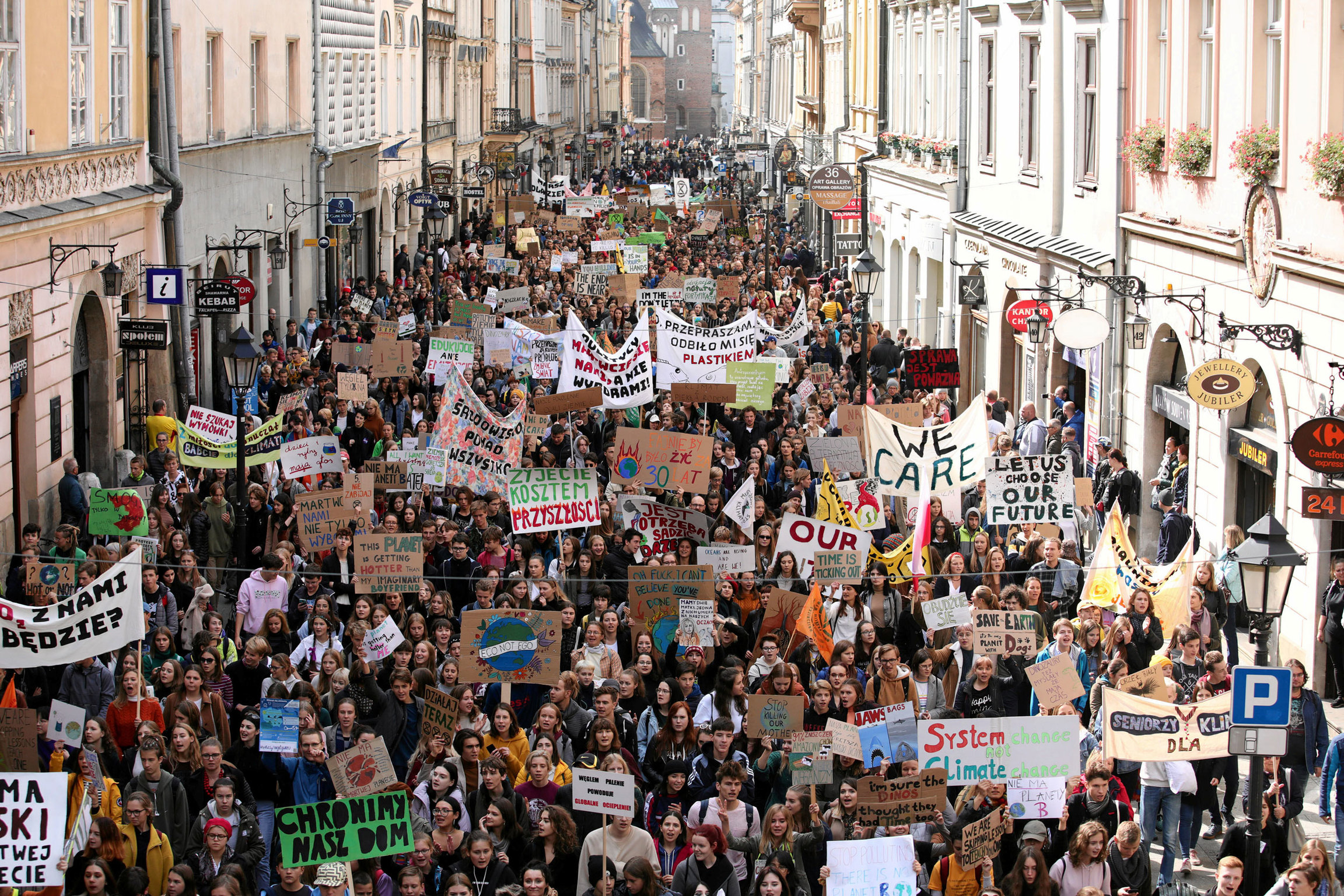 "This is about my future, not only my future, but the future of my entire generation and all the generations to come after ours," said Tristan Vancleef, 16, among some 15,000 demonstrators who marched through central Brussels.

More than 200 young people in Thailand stormed into the  environment ministry and dropped to the ground feigning death as they demanded government action, while students in New Delhi staged a similar "die-in."

Activists in Berlin and Munich re-enacted gallows, standing on melting blocks of ice with nooses around their necks to symbolize the death that awaits them when the polar ice caps melt. Others in Warsaw staged a performance of people drowning in a sea of plastic waste.

While Europeans filled the streets, students in the Solomon Islands gathered at the rising ocean water's edge wearing traditional grass skirts. The issue is vital to low-lying Pacific islands, which have repeatedly asked wealthier nations to do more to prevent rising sea levels. 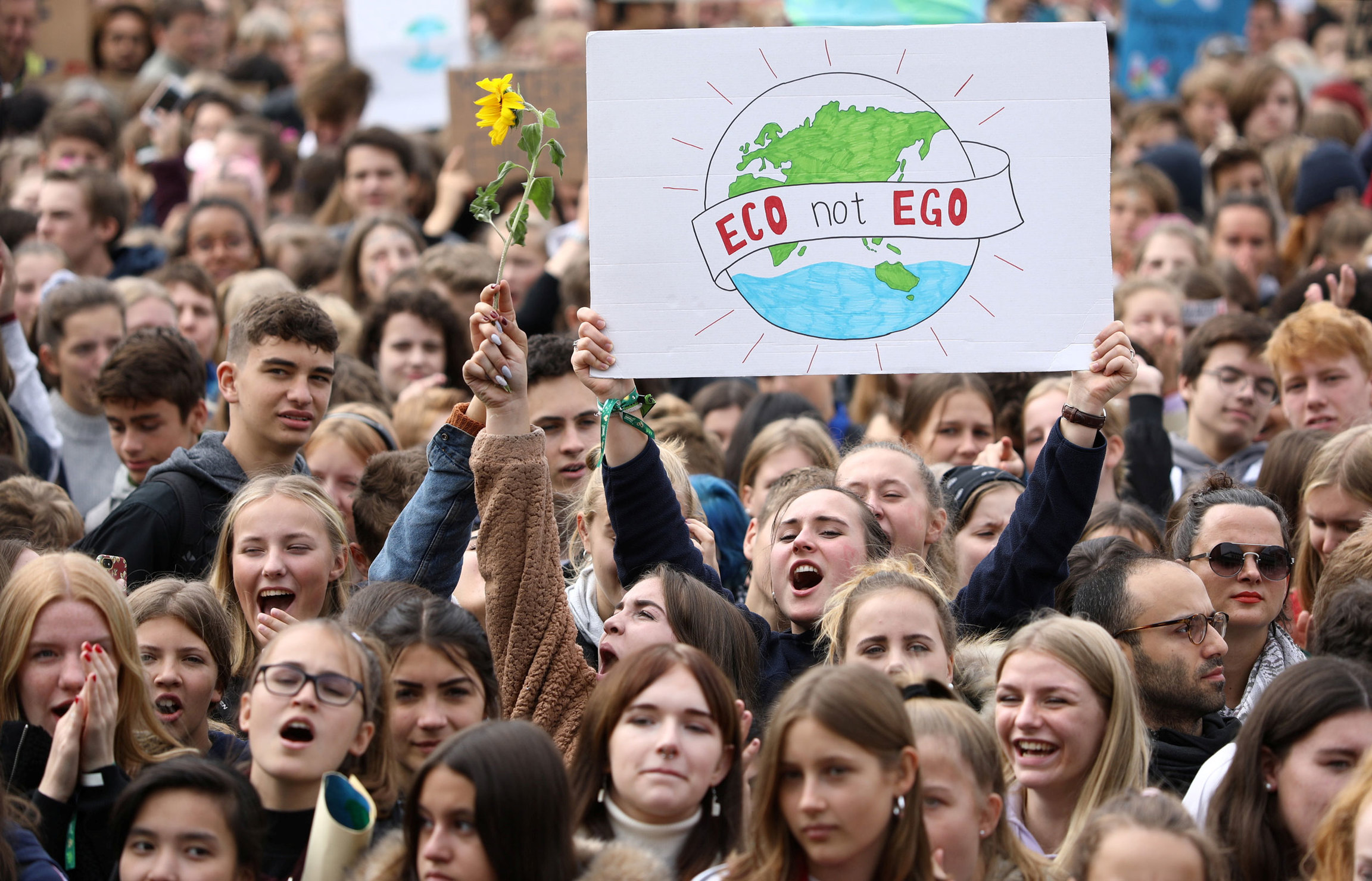 "There is no Planet B," read a sign hoisted by a young woman in London.

In Kenya, around 500 activists marched through the streets demanding that the government cancel plans for a controversial coal plant and investigate corruption in hydropower dams.

"In Samburu there is a lot of heat, the grass has dried up, there is little water," said Francis Lentel, a young herdsman in traditional beads, holding a picture of the Earth weeping. 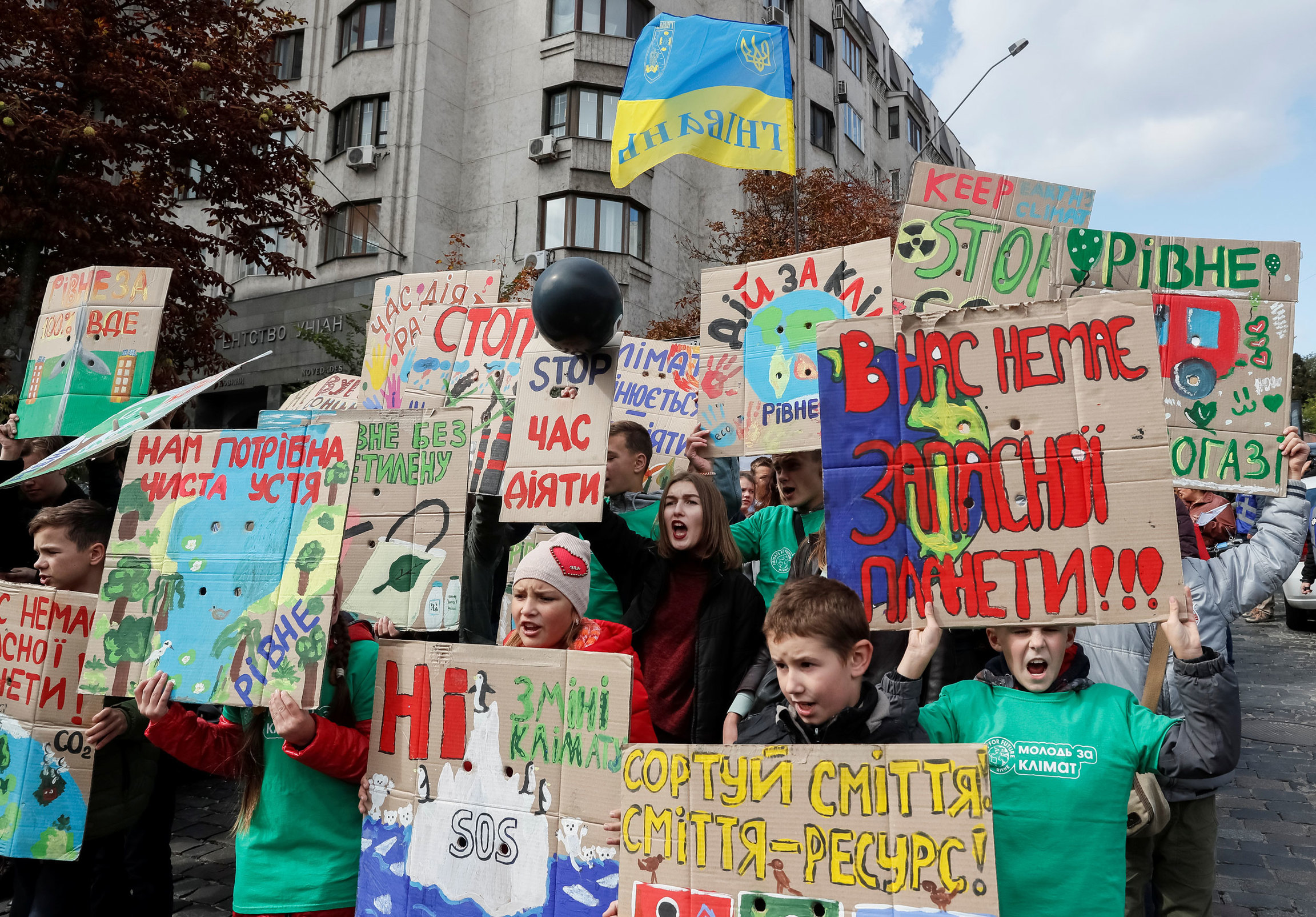 Social media posts showed demonstrations ranging from a few dozen primary school children in Abuja, Nigeria, to tens of thousands of people in cities from Hamburg, Germany to Melbourne, Australia.

"The planet is getting hotter than my imaginary boyfriend," read a poster held by a teenager in Thailand.

"Make love, not CO2" signs were spotted in Berlin and Vienna. 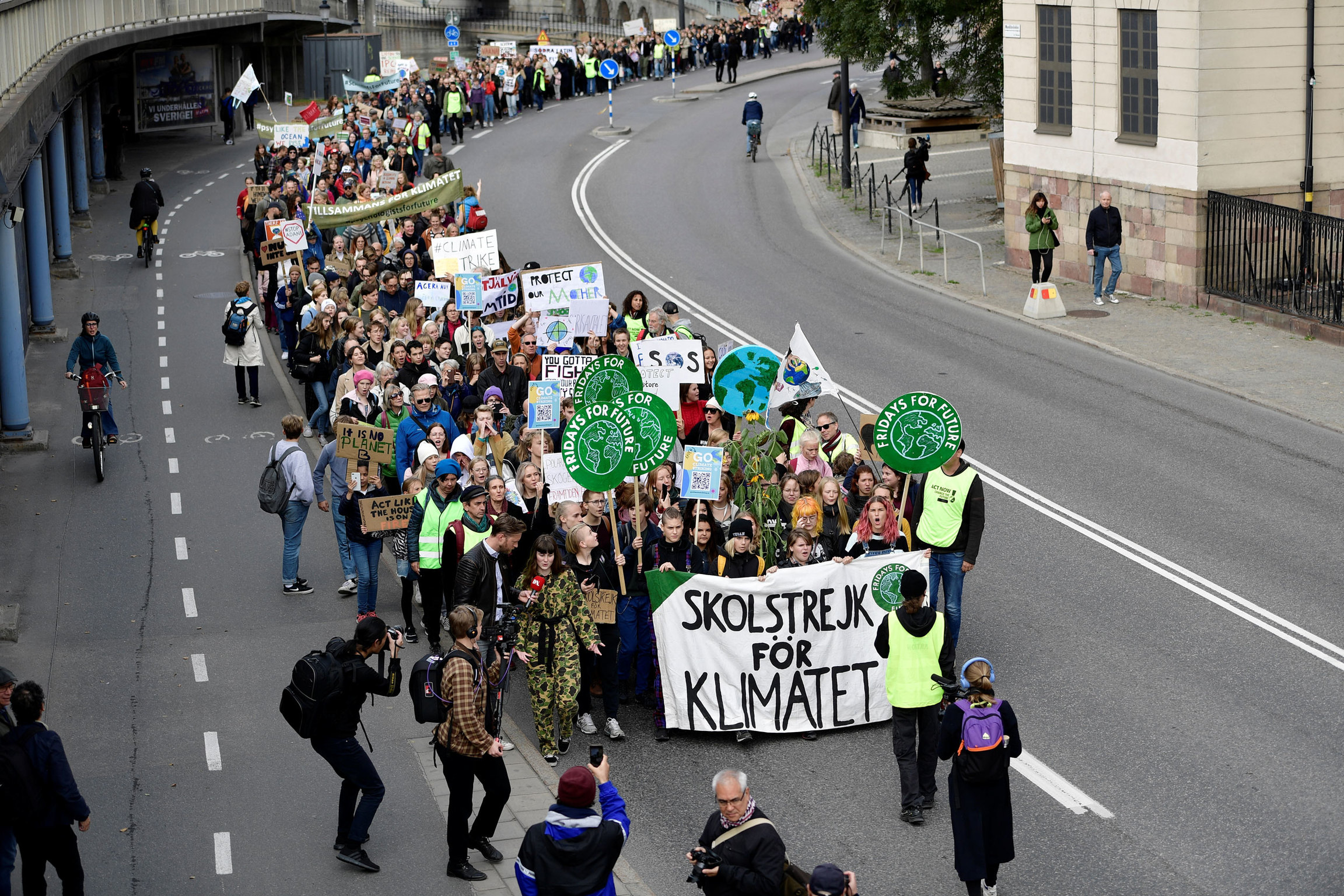 "Our oceans are rising, so are we," was a popular slogan on placards in many places, including one carried by a student in school uniform in Melbourne and another by a girl wearing a facemask in Kolkata, in eastern India. 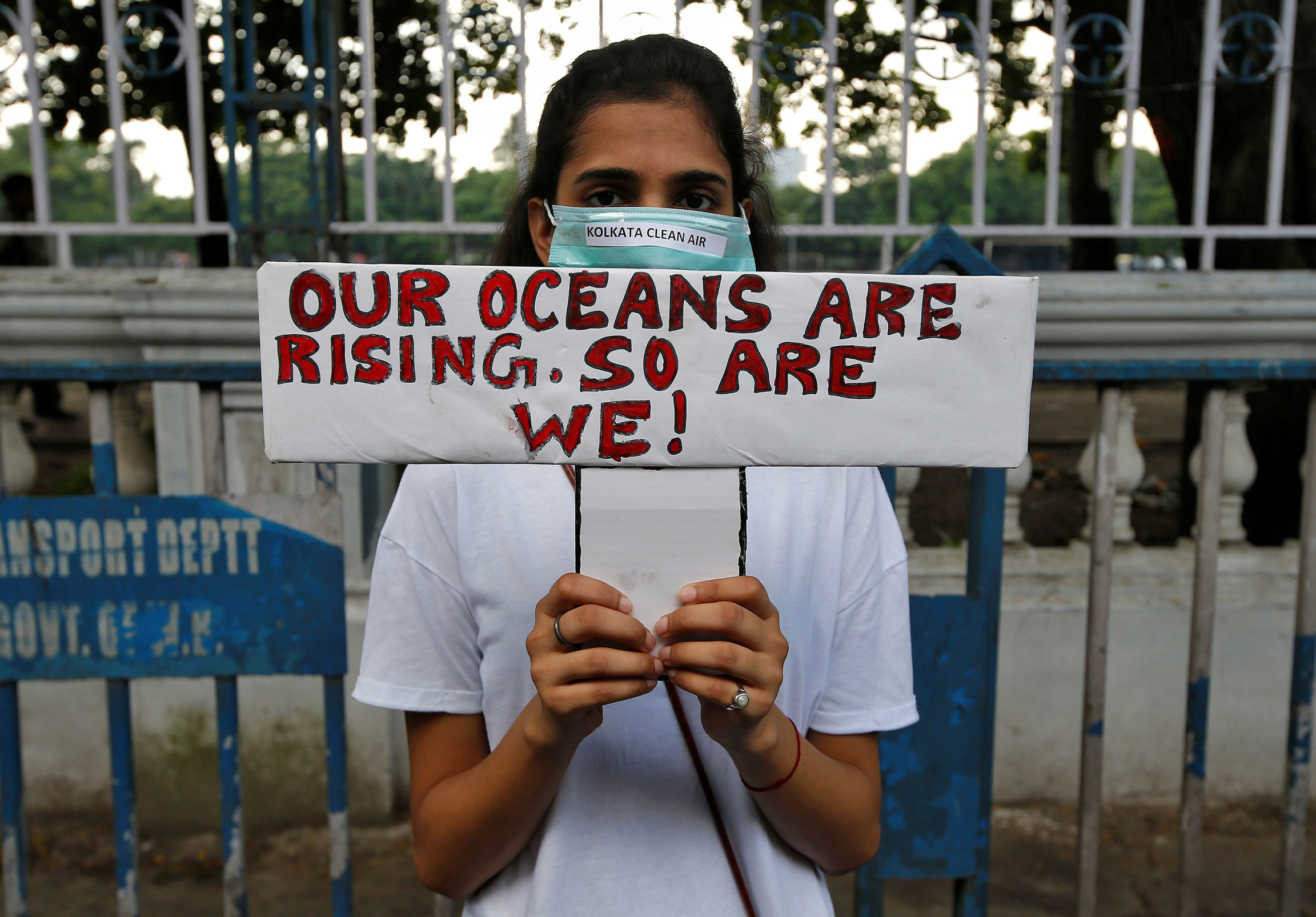 A student wearing a mask holds a placard with a message as she takes part in a Global Climate Strike rally in Kolkata, India, Sept. 20, 2019. 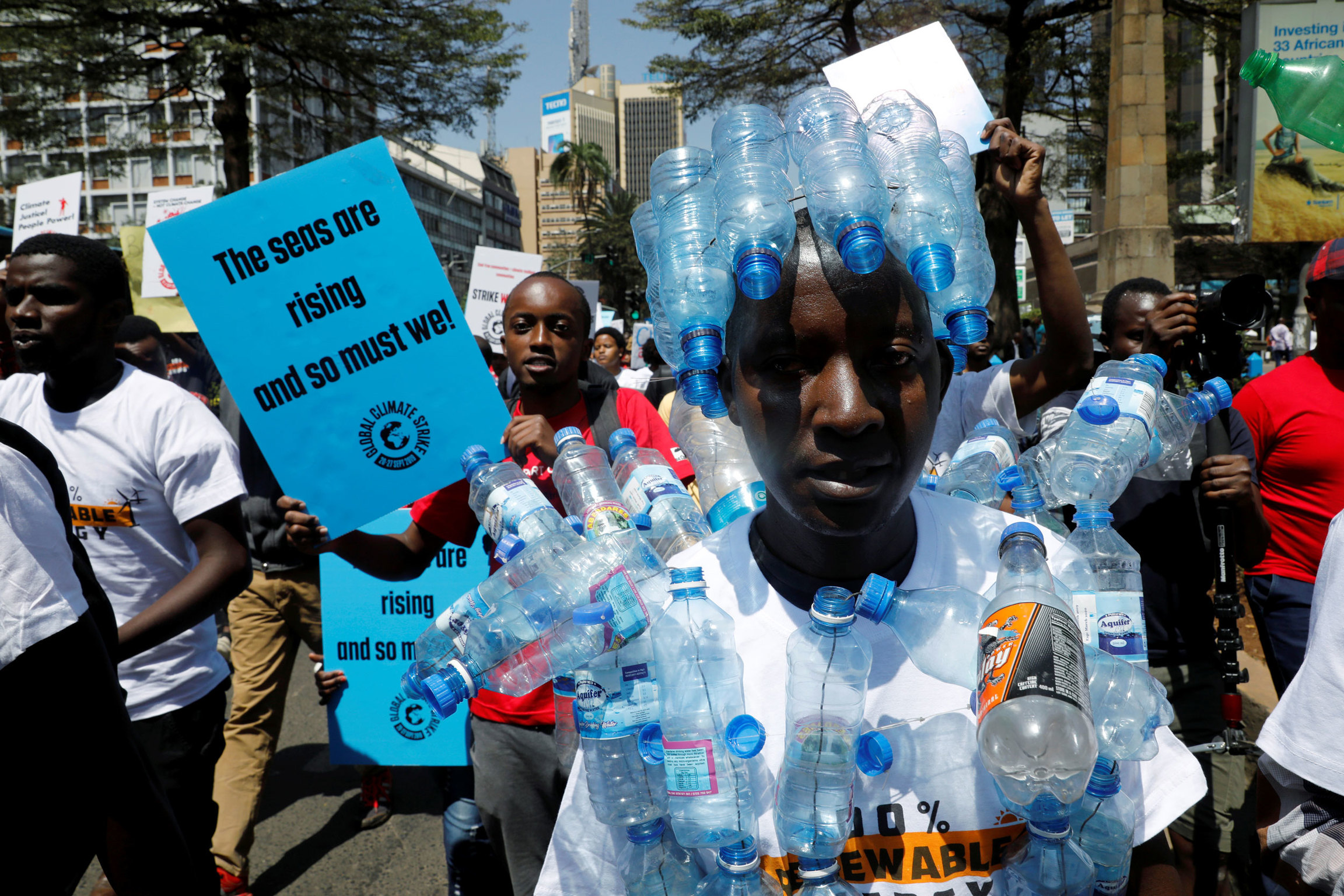 An environmental activist holds a sign as he takes part in the climate strike protest in Nairobi, Kenya, Sept. 20, 2019.

Carbon emissions climbed to a record high last year, despite a warning from the UN-backed Intergovernmental Panel on Climate Change in October that output of the gases must be slashed over the next 12 years to stabilize the climate.

The protest movement is putting increasing pressure on both governments and companies to respond. 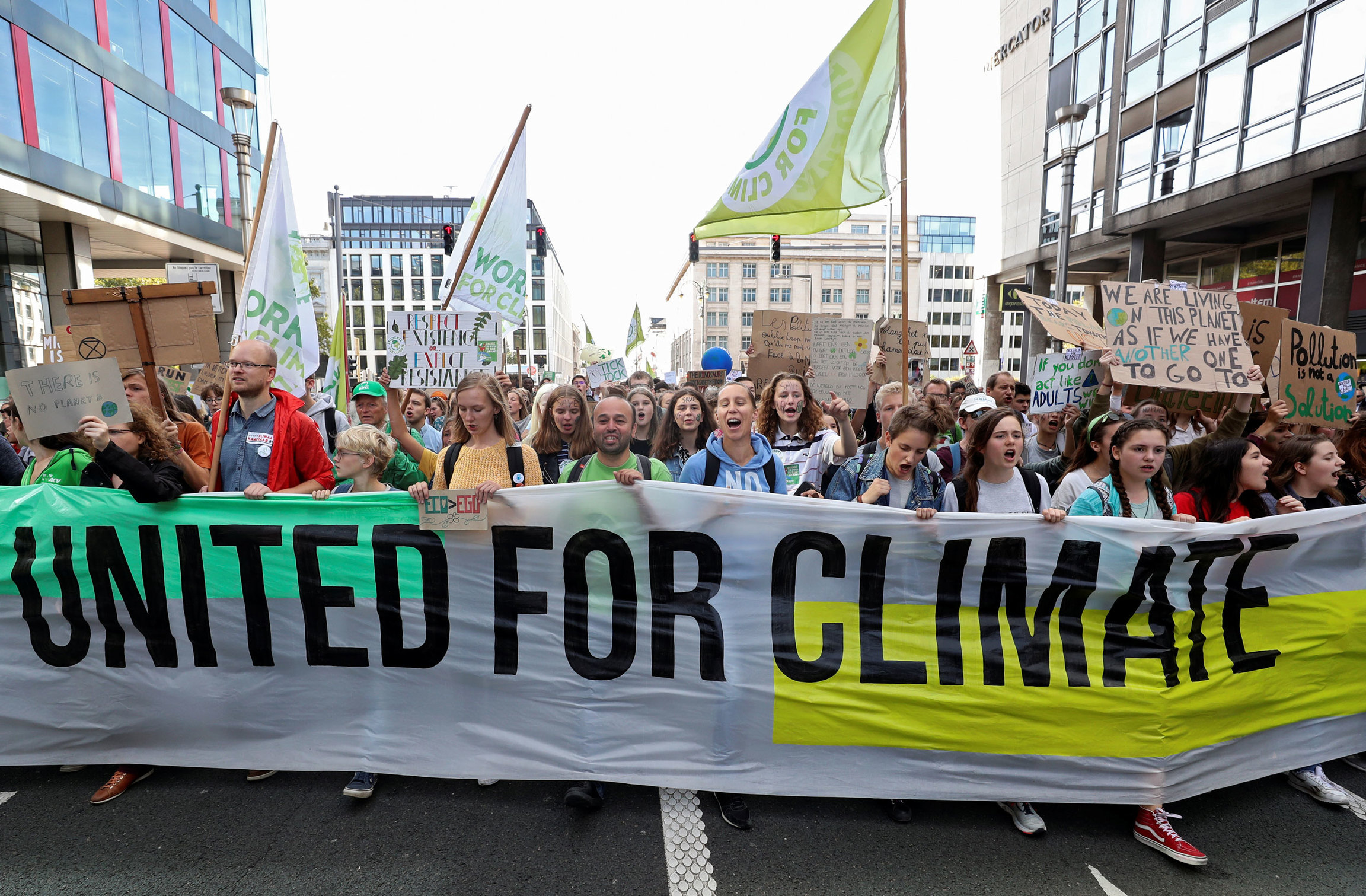 The UN summit next week brings together world leaders to discuss climate change mitigation strategies, such as transitioning to renewable energy sources.

Trump and Brazilian President Jair Bolsonaro, among the world's only national leaders who publicly question climate science, are not due to take part, their representatives said.

Danielle Porepilliasana, a Sydney high school student, had a blunt message for politicians such as Australian Finance Minister Mathias Cormann, who told parliament on Thursday that students should stay in class.

"World leaders from everywhere are telling us that students need to be at school doing work," she said, wearing anti-coal earrings. "I'd like to see them at their parliaments doing their jobs for once."