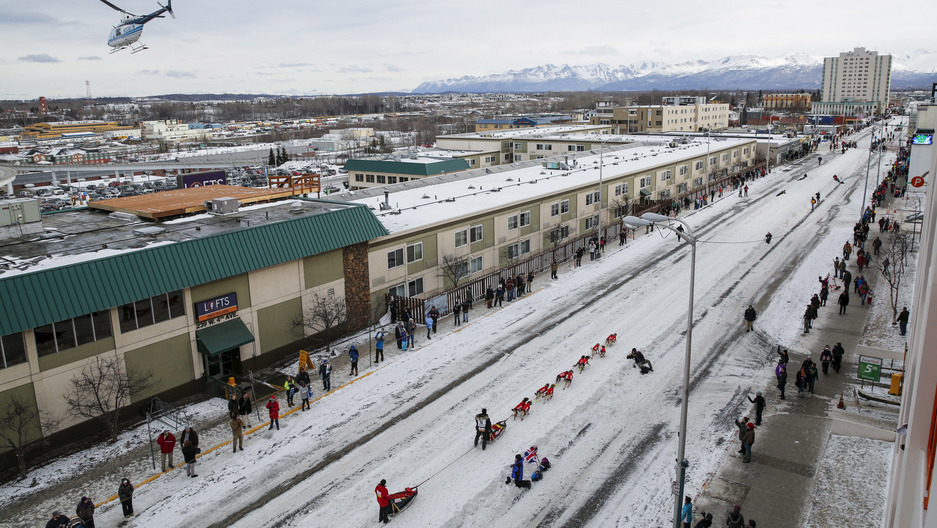 Three of the last five Iditarod sled dog races have been forced to move or alter their ceremonial start in downtown Anchorage due to lack of snow. This frustrating experience for an Alaskan cultural institution is just one example of the ways in which Anchorage, Alaska’s largest city, is already experiencing the effects of climate change.

“We’re dealing with more freeze-thaw events, more rain-on-snow events, a longer fire season,” Mayor Ethan Berkowitz says. “We think that if you want to solve problems you need to take the lead.”

Anchorage is taking the lead by issuing the city’s first climate action plan, which was released in April and will be voted on by the city council later this month.

Alaska is experiencing climate change faster than other parts of the planet.

The municipal plan, if adopted, may become Alaska’s boldest climate statement given that Republican Gov. Mike Dunleavy mothballed the state’s recently adopted climate policy, which sought to reconcile the dilemma of a state heavily dependent on fossil fuel revenues with the fact that Alaska is experiencing climate change faster than other parts of the planet. Over the last century, the average mean temperature in the continental US has increased by 1.45 degrees Fahrenheit. Over the last 60 years, since Alaska began keeping regular weather data, the state’s mean temperature has increased by 4 degrees Fahrenheit.

“We had hoped to work in conjunction with what the state is doing, but this new governor ostriched the problem,” Berkowitz, a Democrat, says. “You don’t do that with problems — you have to confront them.”

Another way Anchorage’s plan sets itself apart is its effort to include an Indigenous perspective. As Alaska’s melting pot, the city is the state’s biggest Alaskan Native “village” by the number of Indigenous Alaskans who have moved there. At the same time, the city is also home to some of the most diverse census tracts in the US, incorporating immigrant communities from Asia, the Pacific Islands, Latin America, Africa and elsewhere.

Jackie Qataliña Schaeffer, an Inupiaq who works for the Alaska Native Tribal Health Consortium, served on the 18-person advisory committee for the climate plan as an Indigenous expert, along with two other indigenous representatives.

“We were looking through multiple lenses — not only sectors but multiple cultures and value systems,” she says.

Anchorage’s plan sets a goal of reducing citywide greenhouse gas emissions by 80% of 2008 levels by 2050, in line with the ambitious targets set by cities worldwide in recent years. The effort calls for increased energy efficiency with new net-zero building codes as well as expanding renewable energy generation and electric vehicle infrastructure.

The plan looks similar to the climate actions that cities around the world have adopted in recent years, and city sustainability manager Shaina Kilcoyne readily acknowledges how the city borrowed from fellow northern-latitude and cold-weather cities like Copenhagen, Montréal and Oslo.

There was also a concerted effort, however, to reflect Alaskan Native values, who were the original occupants and stewards of the region.

“We have a set of values very connected to the land and the sea. We are part of the environment, we are not separate from it.”

“We have a set of values very connected to the land and the sea,” Schaeffer says. “We are part of the environment, we are not separate from it.”

Schaeffer sees that mindset reflected in the plan’s food security provisions, which emphasize local food access and consumption — buzzy sustainability concepts in the Lower 48 that carry a more significant weight in Alaska.

“People in Anchorage have a different definition of food security than anywhere else in the US,” she says. “Their freezers are usually filled with foods from the land and sea that are free to them.”

It’s not just Native Alaskans who stock up on moose or salmon. “Part of our values are sharing so it’s not just Indigenous people who get to subsist,” she says. “Everybody who comes to our state gets the opportunity to fish, pick berries and harvest medicinal plants.”

As a result, Schaeffer hopes the plan’s food system provisions that discuss subsistence food consumption will lead to efforts like horticultural programs to help residents identify edible plants that have been consumed by Alaskan Natives for generations. The plan proposes expanding edible landscaping and educating locals on how to harvest native plants, but Schaeffer would also like to see state and federal food assistance programs help people without transportation reach wild berry picking spots in nearby Arctic Valley — not the typical way that such benefits are applied, as they normally support cash purchases of food.

“We have to take the framework of a city in the contiguous US and flip it,” Schaeffer argues.

In light of the state government’s backsliding on climate, local climate activists are enthusiastic that Anchorage is picking up the mantle, but some still see the plan as too aspirational and not sufficiently binding.

“Like many climate action plans, the Anchorage plan lacks the clarity and mechanisms necessary to achieve its worthy goals,” Alaska Climate Action Network’s Ceal Smith tells Next City via email. The group continues to push for performance-based goals as well as municipal ordinances and funding streams that would turn the plan from paper into practice.

Schaeffer also sees room for improvement, noting that only one person of Eklutna ancestry, the traditional inhabitants of the area where Anchorage is now located, sat on the advisory committee. The Inupiaq, for example, traditionally live further north above the Arctic Circle and along the Bering Sea.

Nevertheless, that culture’s values have percolated down to the rest of the state.

“There’s an Inupiaq elder who once said we don’t own the land, the land owns us,” Berkowitz says. “It means that we have a responsibility to take care of the place that feeds, shelters and clothes us.”

This story originally appeared in Next City. It is republished here as part of The World's partnership with Covering Climate Now, a global collaboration of more than 250 news outlets to strengthen coverage of the climate story.