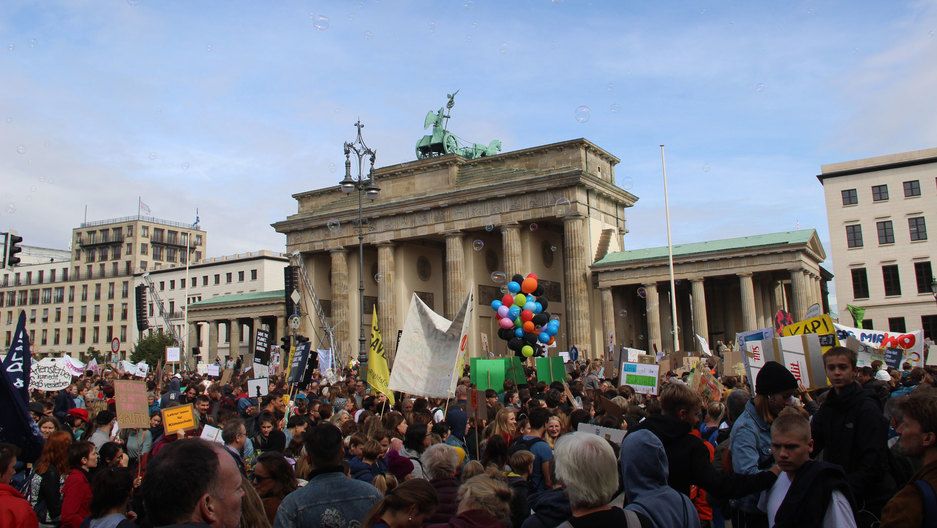 An estimated 100,000 people turned out for the climate strike in Berlin on Sept. 20, 2019. Organizers said more than a million people participated in protests in hundreds of cities and towns across Germany.

But back home in Berlin, the Chancellor is under fire from critics who say her own climate policy is far too timid.

On Friday, Merkel unveiled a $60 billion package aimed at cutting greenhouse gas emissions and getting Germany on track to meet its commitments under the 2015 Paris Climate Agreement.

Perhaps a few years ago the plan would have been hailed as a major step forward.

But instead, Merkel’s announcement was met with frustration. Critics called the proposal “faint-hearted,” and disappointing. Even the country’s main industrial federation, which has been skeptical of climate action in the past, noted the plan was “not the huge step it was billed to be.”

Related: Young climate activists want a seat at the table before it's too late

The reception is a sign of a shift underway in Germany, the world’s sixth largest carbon emitter and a key player in international climate negotiations.

Starting last winter, thousands of students began walking out of school on Fridays as part of youth protests demanding more action on climate change. Then, in May, the Green Party made major gains in the European elections, surging into second place in Germany. Advocates say the politics of global warming are changing rapidly, with more public support for aggressive action to reduce greenhouse gas emissions — and that Merkel’s government isn’t keeping up.

“If you’re looking to the German debate, what we’re seeing now is a real discrepancy between calls for action, really on a very broad basis … and the government is not delivering,” said Matthias Buck, head of European energy policy at the Berlin-based think tank Agora Energiewende.

One sign of that shift was the demonstration taking place just blocks away from the chancellor’s press conference, where more than 100,000 people gathered in a massive, festive protest at Berlin’s iconic Brandenburg Gate. It was one of the largest demonstrations in Friday’s worldwide climate strike, led by students. 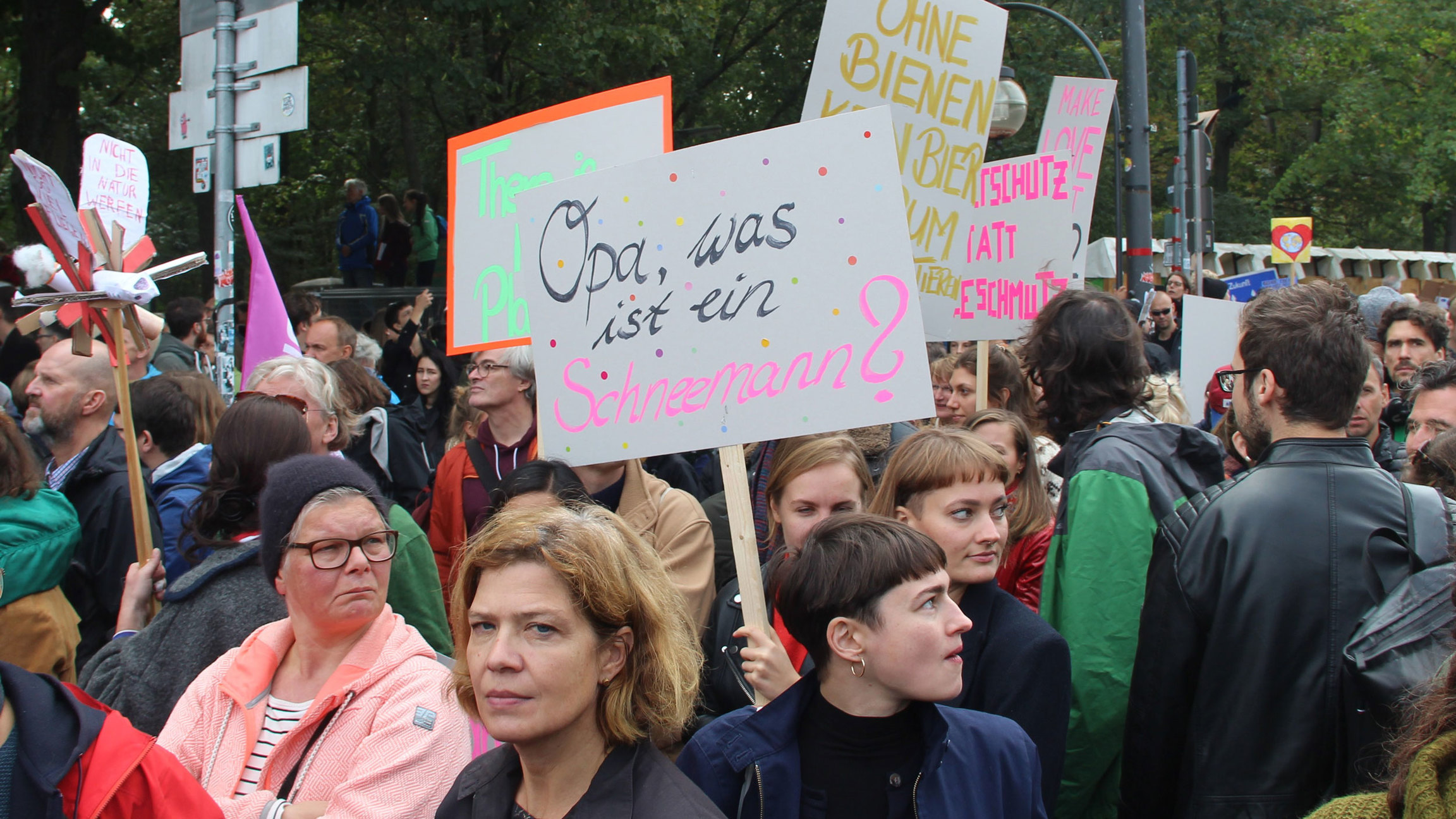 A protester holds a sign reading, "Grandpa, what is a snowman?" at the Berlin climate strike on Sept. 20, 2019.

Merkel herself has acknowledged the importance of that movement. At the press conference announcing her climate package on Friday, she saluted Greta Thunberg, the 16-year-old Swedish teenager who sparked the current student movement. As a trained scientist herself, Merkel said, she’s impressed by Thunberg’s demand that governments “unite behind the science.”

“We're not doing something ideological here,” Merkel said, “but something for which there is massive evidence.”

The government’s plan includes a slew of new subsidies and regulations to nudge the economy away from fossil fuels, including measures to expand wind and solar power, and new investments in public transit and infrastructure supporting electric vehicles. It would set binding targets for emission cuts in economic sectors such as agriculture and transportation.

It would also impose a new price on carbon emissions from transportation and heating fuels — but critics say the proposed price is too low.

“It’s very disappointing,” said Brigitte Knopf of the Berlin-based Mercator Research Institute on Global Commons and Climate Change. “The government has really failed to come up with a big deal here.”

Knopf helped advise Merkel’s government on setting up the new carbon pricing system. But, she said, the government’s final proposal is too weak. The plan would set an initial price of $11 (€10) per ton of carbon dioxide emissions from fuels like gasoline and diesel, starting in 2021. That’s enough to raise the price of a gallon of gas by about ten cents.

“That’s far too low to have an effect,” Knopf said. “According to our calculations, this price should have been five times higher.”

“That’s far too low to have an effect,” Knopf said. “According to our calculations, this price should have been five times higher.”

Felix Heilmann, a Berlin-based researcher with the climate change think tank E3G, said many measures in the package are good policy on their own, but that it lacks an overarching vision. “There’s a lack of a big picture vision for where to go, and a lack of coherent structure,” Heilmann said.

Still, he said, it’s not so long ago that this kind of climate policy wouldn’t even have seemed possible.

“Something like this climate package, in terms of the scope of the package, wouldn’t have been imaginable a year ago,” Heilmann said.

Germany has a reputation as an international climate leader. But in recent years, the country has struggled to cut emissions — and politicians seemed unwilling to do more.

Just last winter, Merkel’s conservative coalition refused to even consider a carbon price, worried about economic impacts, as well as industry and consumer push-back. Politicians also worried about the challenge from the far-right party Alternative for Germany, which has made opposition to climate action a key part of its platform.

But in the last 18 months, the politics of climate change in Germany have shifted.

A major heat wave in the summer of 2018 smashed records across the continent and a historic drought hit German farmers hard. Suddenly, climate change wasn’t an abstract issue anymore, said Knopf of the Mercator Research Institute.

“I think that people really experienced that climate change has something to do with them,” she said.

Then, last winter, students started walking out of school on Fridays to demand more action on climate change. Germany has had some of the biggest student climate protests in the world, with “Fridays for Future” strikes spreading to hundreds of towns and cities across the country.

“Over the past 18 months, since ‘Fridays for Future’ started, we’ve seen a real mass movement,” Buck said.

By this spring, polls showed that climate change was a top priority for German voters.

When the Green Party took second place in Germany in May’s European elections, European media dubbed it part of a “Green Wave.” The results were widely interpreted as a demand for more action on climate change.

“Everybody in Germany has realized you cannot win the next national election unless you have a credible response to climate change in your pocket,” Buck said.

Buck says the government’s plan doesn’t meet that standard. But it is a step forward. If the full package passes the parliament, Germany will have an emissions trading system and a set of binding emissions targets — both of which can be tightened in the future. Meanwhile, Germany has already committed to phasing out coal power over the next two decades.

At the press conference on Friday, Merkel had a message for her critics.

“What distinguishes politics from science and impatient young people,” she said, “is that politics is what's possible.”

Protesters aren’t satisfied with that. On Twitter, the student organizers of Friday’s protest said Merkel’s announcement was a “bad joke” and called for new elections, saying the government must do more.

Until then, they plan to keep marching. The next strike is on Friday.