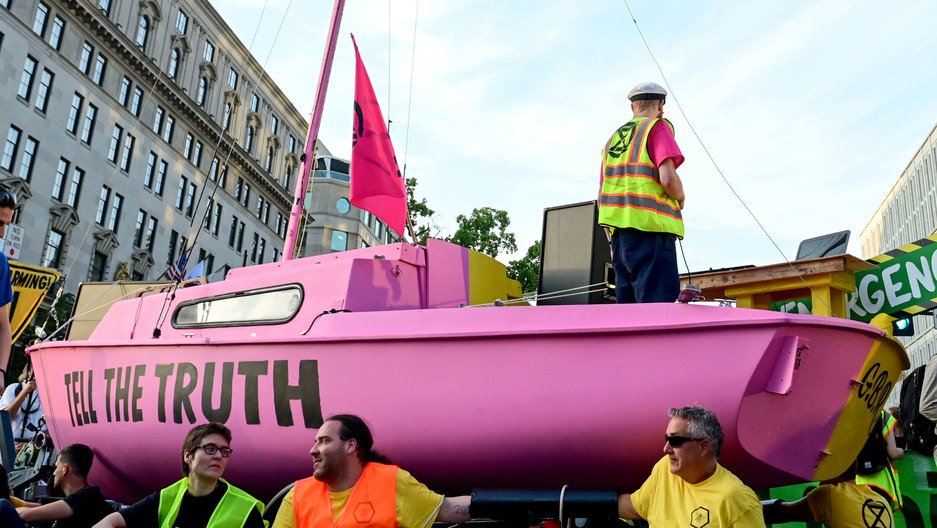 Protesters chain themselves to a boat being used to block traffic at an intersection near the White House on Sept. 23, 2019.

Activists seeking to pressure US politicians to fight climate change blocked major traffic hubs in the US capital on Monday, drawing attention to a United Nations Climate Summit that is attended by leaders — and youth activists — from about 60 countries.

Those attending the New York summit also include the leaders of small island states most at risk from rising sea levels and companies expected to make fresh pledges to cut emissions of greenhouse gases.

Just north of the White House, at 16th Street and K Street, activists pushed a small sailboat in the middle of the intersection and protesters clung to it. About 200 protesters staged a dance party in the street while police weaved through the crowd.

"I'm fighting for our future because if things continue as they are with fossil fuel extractive industries ... increasing greenhouse gases there's not going to be a good future for anyone," said Arielle Welch, 23, a volunteer for the Sunrise Movement, a nonprofit group.

The protest, called Shut Down DC, was backed by about two dozen groups including the Metro DC chapter of the Democratic Socialists of America, Extinction Rebellion DC and Black Lives Matter DC.

Washington metropolitan police said they were equipped to handle a demonstration of any size.

In New York, several more protests took place last week, many organized by youth activists. They have become the world’s most visible activists pushing for governments to slash greenhouse gas emissions and put the brakes on climate change. 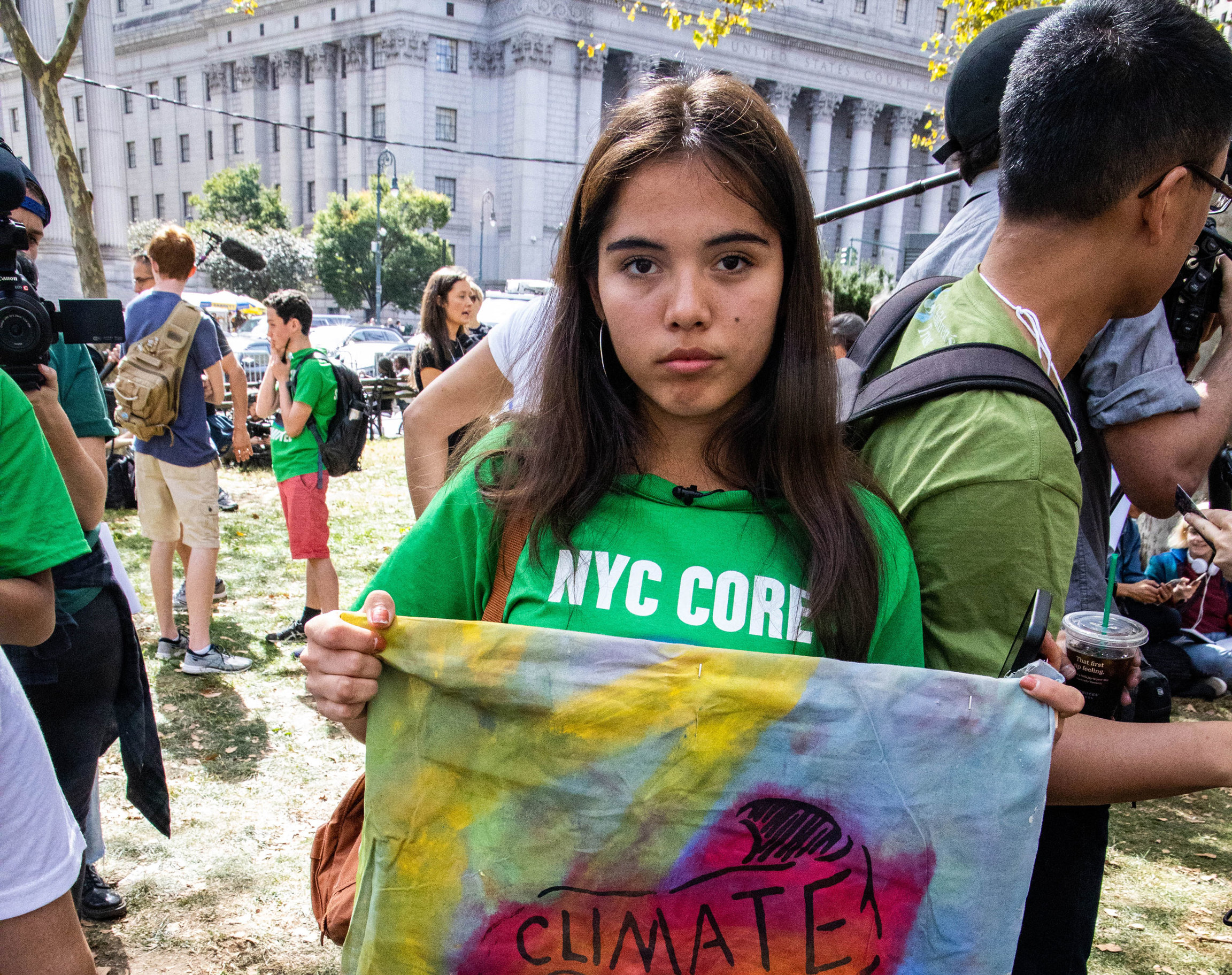 Xiye Bastida at Foley Square in New York City just before the Climate Strike on Sept. 20, 2019.

“We as youth know that we’re going to be the most affected if we don’t do bold climate action right now,” said Xiye Bastida, a 17-year-old climate activist, who rallied protesters Friday.

Xiye grew up in Mexico and moved to New York four years ago, at age 13. But before she did, she saw her hometown being flooded after heavy rains.

“That was the first time I experienced the climate crisis,” she said.

In New York, she saw the scars left behind by Hurricane Sandy, which devastated communities when it hit in 2012, and started an environmental club at her high school. This spring, she started skipping school on Fridays to demonstrate in front of the United Nations.

"We as youth know that we’re going to be the most affected if we don’t do bold climate action right now."

Bastida is not a household name like Greta Thunberg, the 16-year-old Swedish activist who started the global school strike movement a little over a year ago. But Bastida did go to Washington last week to speak with senators.

On Friday, Bastida and her fellow organizers in green shirts lead a crowd that swelled to 250,000 people and marched down the streets of Manhattan to Battery Park, where Thunberg herself made an appearance.

Bastida and young people like her have created a global cultural moment, but all that energy has yet to translate into policy change in key places.

In the US, Brazil, India and China, emissions regulations are being weakened, the Amazon is opening up for business, and new coal-fired power plants are still being built.

Extinction Rebellion, which says it is backed by hundreds of scientists and helped organize the DC protests, promotes nonviolent civil disobedience to press governments to cut carbon emissions and avert a climate crisis it fears will bring starvation and social collapse.

Over 11 days in April, the group disrupted parts of London, stopping trains and defacing the building of energy giant Shell.

Protesters aim to pressure US government workers who are helping to make Washington an obstacle in international climate negotiations, said Kaela Bamberger, a spokeswoman for Extinction Rebellion DC.

President Donald Trump, who is not scheduled to attend the UN climate meeting and intends to pull the United States out of the 2015 Paris accord, has rolled back Obama-era rules on emission cuts and wants to maximize US energy output. 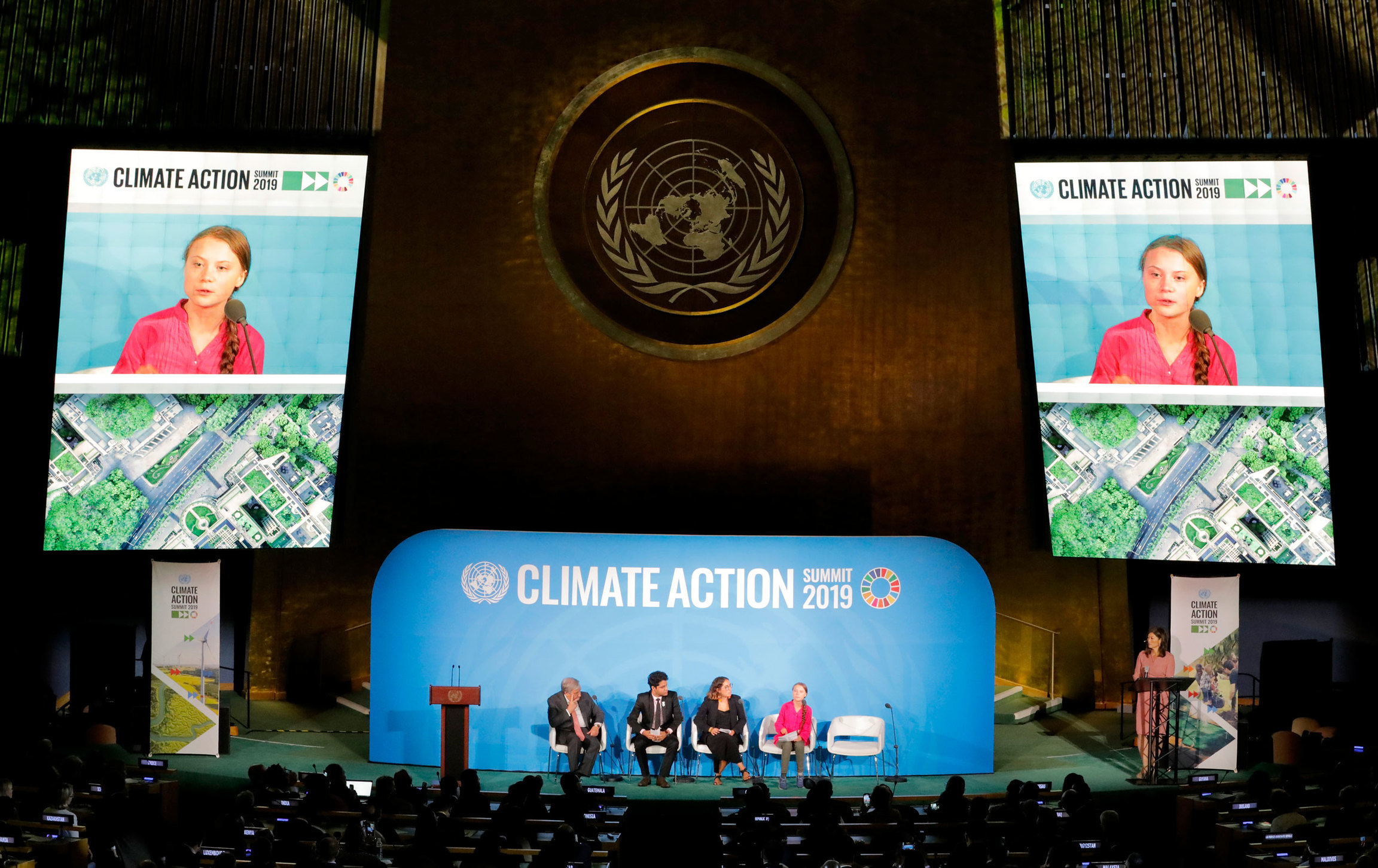 Monday's protest also seeks to support the strikes of Thunberg, the youth climate activist who traveled to New York in a sailboat and launched a global movement of like-minded climate youth activists.

Bastida, for her part, said she doesn’t feel like she had any real conversations with leaders in New York who could actually make things happen.

“We’re having two different summits, on the same topic, purposefully saying, 'This is youth,' and the other one is high-level officials. Why don’t we have both voices in the same space?"

"We need true inclusivity and youth in decision-making. How long can we spread our message before it’s too late?"

Bastida is one of many young poster children who has come to represent the moral imperative to act on climate change.

And now that she has helped start a global conversation, she wants to do more than talk.

“We need true inclusivity and youth in decision-making. How long can we spread our message before it’s too late?”

Carolyn Beeler and Reuters contributed to this report.