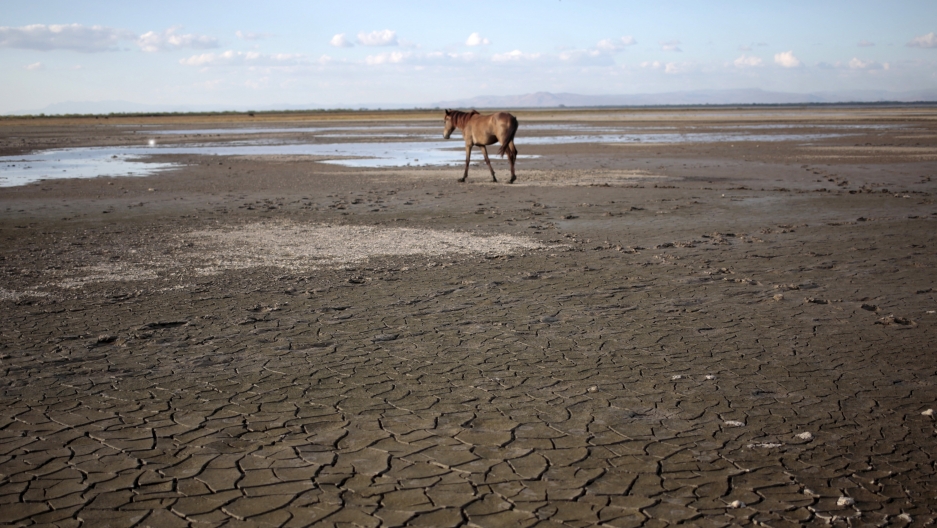 A horse walks at Tisma lagoon, Nicaragua, Feb. 29, 2016. In Central America, drought and severe weather have caused thousands of farmers and their families to head north seeking means of survival.

As immigration issues along the US southern border continue to roil the country, one driving force of migration from troubled Central American countries has received relatively little notice: climate change.

Author and journalist Todd Miller, who has written a new book called, "Storming the Wall: Climate Change, Migration, and Homeland Security," says climate change is a key factor forcing families to flee from Central America and Mexico — and deadly droughts, hurricanes, floods and mudslides are projected to intensify further in the region as global warming increases, which will hit small farmers especially hard.

During his research, however, he encountered farmers fleeing for ecological, not just economic, reasons. He heard stories from farmers who had faced drought or damaging hurricanes that devastated local communities, and some people told him that natural disasters and changing climate situations were the primary reason they were heading north.

“In the region that extends from Guatemala, El Salvador and Honduras into Nicaragua, which is filled with many poor, small farmers who depend on seasonal rainfall, the farmers were expecting rain and there was no rain,” Miller says. “One mayor in a nearby town where these farmers are from said, ‘We are facing an unprecedented calamity.’”

A climate scientist who studies the area told Miller the drought conditions were not an anomaly, but had been occurring for 10 years and were connected to a warming globe. “So, we're looking at a situation in Central America, which already has a number of factors that are displacing people, and we have to look at this ecological aspect to give a holistic analysis of it,” Miller says.

The climate scientist called Central America “ground zero” for climate change in the Americas, Miller says. It is an isthmus, meaning it has large bodies of water on two sides, so it is more vulnerable to sea level rise, powerful storms, hurricanes and large swings between too much and too little rain.

A report on Mexico showed the potential for an equally unstable future. The report predicted that by the year 2050, 1 in 10 Mexicans would be displaced due to climate-related hazards such as sea level rise, hurricanes and drought.

Water scarcity also presents severe problems for Central America and Mexico. Northern Mexico and Arizona, where Miller lives, are in a severe drought already and “the projections for drought going forward are dire,” he says. “Some people don't have running water most of the day or it will run only for a couple hours a day, so they’re already adjusting to really awful situations."

During his research, Miller looked at “a binational … water harvesting project” happening on the US-Mexico border. Guides took him to Silver Creek, which is what’s known as a “dry wash:” no water runs through it for much of the year and then it flows strongly during the monsoon or rainy season. The guides showed him a series of gabions embedded in the stream bed.

A gabion is essentially a steel cage filled with rocks that acts as a kind of sponge, Miller says. The gabions slow down the water during the rainy season and release it at a lower rate while allowing the surrounding landscape to soak in the water and sediment.

Around these gabions, desert grasses and willows and other trees were growing back. Wildlife is also returning to the region. “They told me the most amazing thing that I had ever heard — that [while] this region of Arizona and Sonora was in a 15-year drought, they had raised the water table, due to these gabions, by 30 feet," Miller says. "They were literally reversing a drought in a very small-scale sort of way.”

Miller believes the US would do well to invest in these kinds of projects in the countries that are sending environmental refugees north in search of a means to survive, rather than spending $25 billion building a wall to keep them out. Otherwise, there is no stopping what could be a uniquely troubled future.

Global projections for the number of people displaced by climate change by 2050 range from about 150 million to 1 billion, Miller notes. The precise numbers are still a matter of debate among scientists who do empirical research connecting climate with displacement, but, Miller says “one of the researchers told me, ‘Whatever it is, it's going to be staggering, and it's going to be without precedent in human history.’”