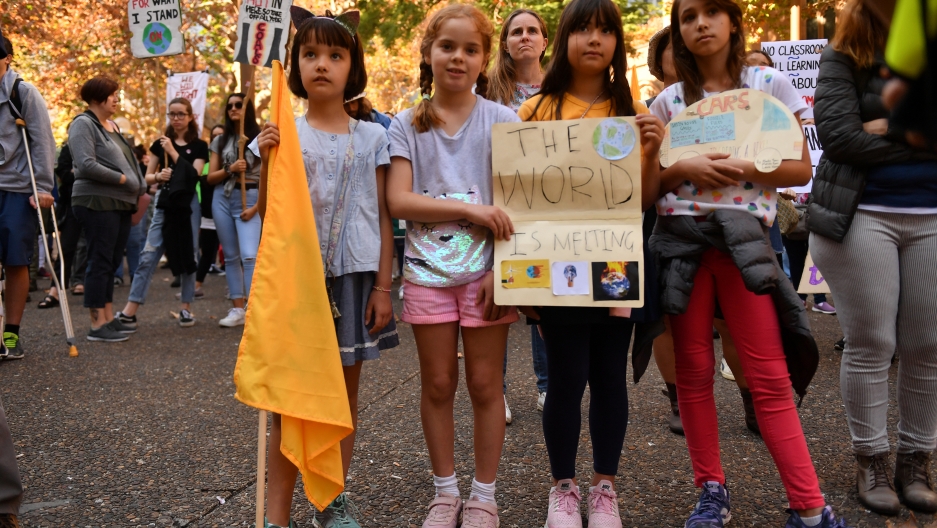 People gather at Town Hall Square for a climate change protest in Sydney.

A new report by experts from 27 national science academies in Europe warns that the climate crisis is already having a big impact on human health, including mental health.

To understand the connection between the two, The World's host Marco Werman spoke with Helen Berry, a professor of climate change and mental health at the University of Sydney.

Marco Werman: Professor, it seems almost intuitive that climate change could affect our mental health, but is there actual evidence that that's true?

Helen Berry: You've asked the most difficult question you could have asked. The short answer is yes, of course, and the long answer is no, it's incredibly difficult to do this kind of work, partly because climate systems themselves are extremely complex and partly because mental health is also extremely complex. And bringing those together makes a very huge and difficult puzzle. It's really important to apply some common sense here, which is what you implied in your question. It's also important to understand how we can go about approaching this problem so we can eventually get the scientific answers that we want.

That makes sense, and I gather that the research suggests that this can play out on at least two levels: the emotional impact of specific events and trends, as well as the emotional weight of the bigger picture. So what do we know? It sounds like the second strand is probably the harder thing to assess.

Yeah, I think there are lots of strands actually, and the more work we do and the more I think about it, the more I think that's the case. I think what we need to do is go back to first principles and try to understand how it could be that this situation has arisen. We have climate change because we as a human race have chosen to exploit our planet and the people living on it without regard for the impacts on either. We're in the process of destroying the very natural systems that we rely on for our survival and anything that we do that threatens our survival is inherently terrifying. That's one of the first pathways from climate change to mental health impacts. You see this particularly in the kids protests that we've seen around the world and how very terrified children are about the planet that they're inheriting and what the grown-ups around them are doing to it and failing to do. The more vulnerable people are, the more prone they are to be victims of that particular mental health pathway.

Give me an example of that, because the report does focus specifically on marginalized people and the most affected in terms of mental health.

Let me give you a couple of examples and then talk about why it's difficult scientifically to make that link. For example, in Australia in the summer of 2011 to 2012, we had two cyclones and huge floods in the state of Queensland in the tropical north. The floods that arose from those didn't affect everybody the same. People who were living in poor regions of the country and those who also were socio-economically disadvantaged in their own right were much more likely to be hit by the flood itself. What we also found in that study was that if you were flooded and you happen to be a socio-economically disadvantaged person, the effect on your mental health was at least twice as bad as it would have been had you not been in that situation. So, there's a kind of a double jeopardy. We see that all around the world and in all different settings. We see it with drought, we see it with heat, and we see it in disadvantaged country settings and so on.

Helen, if you're not instantly affected by specific events as you were just describing and you're just thinking about the future of the planet, then do mental health consequences from climate change that may become something like a middle-class concern?

If you'd asked me that question a couple of years ago, I would have said thinking about climate change and being aware of climate change doesn't in and of itself cause mental health problems for individuals. People who already have existing mental health problems or who are at risk of mental health problems are more likely to become personally anxious or distressed or even depressed or traumatized, but for the large majority of people that doesn't happen. I think in the last year or so, with the really catastrophic indicators that we're getting of what global warming and climate change may mean in practice to real people in real lives, I think that's starting to change. I think with seeing it's at a group level as opposed to at an individual level in some categories of people who are the most vulnerable. I come back to mentioning the children and children's protests that we've seen and the impact that it's having on them in their lives and the future that they anticipate as a result of it. I think now that children, as a group, are getting some mental health impacts as opposed to individual children with particular vulnerabilities.

I have to wonder if you're the very first person in the world to have such a position.

I am and as far as I know I'm still the only one. I guess in Australia, we have a bit of a tradition of doing research into climate change and health generally and my particular interest is mental health. Also, in Australia we have a couple of other features I think that make us focus in this area. One is that Australia as a continent is exceptionally vulnerable to climate change; it's one of the most vulnerable places in the world because of the geography of our island and the ocean flows around it. Whatever is happening in the world generally is happening far worse in Australia.

Was it those fires and floods that you were talking about earlier that led to the creation of this position?

No, it's been my work over a decade or more that's culminated in this, it wasn't any particular event. Australia is in the unusual situation of being very vulnerable to climate change and also being a wealthy country that has some capacity to invest in research. Most countries that are very vulnerable to climate change are not those that have research capacity to take to any great degree, so we've kind of taken that take that job on. if you like.

How does understanding the dynamics between mental health and climate change actually help people cope?

A significantly bad enough version of climate change is already with us that we have to adapt to it. So, what we need to have is the best mental health possible to help us adapt because one of the things that mental health problems does is reduce people's capacity to cope and adapt. We don't want that right of the moment where we've got a massive crisis on our hands. We need to keep people as healthy as possible in every way, especially mentally, and we need people to have tools and ways to adapt and really this can only be done at a collective level.