Philippa Robb reaches into a kitchen cupboard in her west London home and pulls out an old yogurt container.

“Should we bring this one for cheese?” she asked her 16-year-old son, Haydn Robb Harries. “What about for nuts and dates?”

In recent years, it’s become fairly common for people to bring their own shopping bags to the store, but for the past 18 months, Robb and Haydn have been bringing their own containers, too. That’s because, after a long consideration, Robb gave up buying single-use plastic in January 2018.

Related: This Australian airline invites you to ‘sit back and enjoy the world’s first zero-waste flight’ 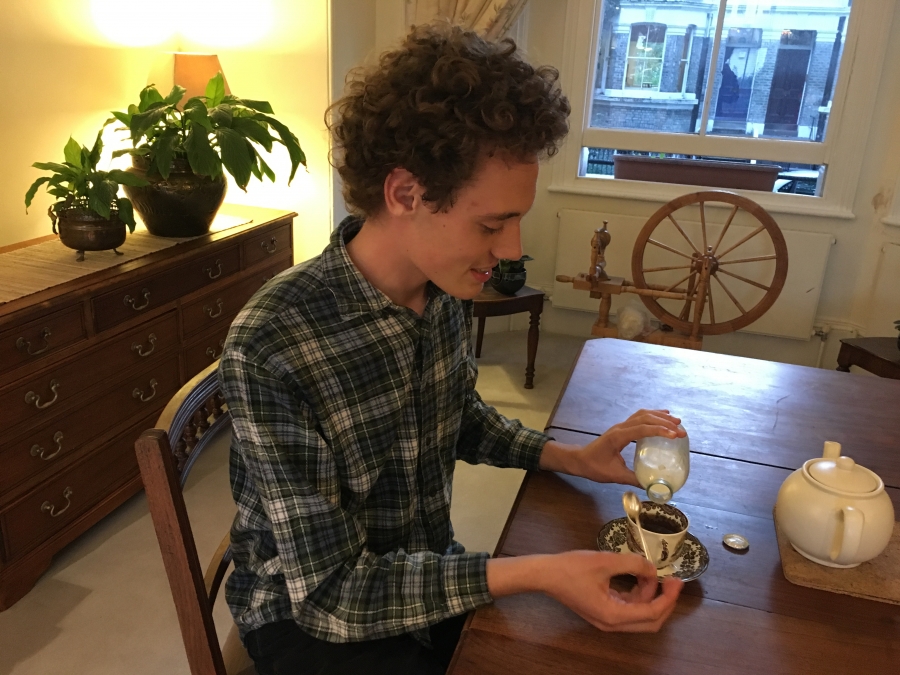 Sixteen-year-old Haydn Robb Harries writes about politics for his school paper. He thinks it is a good idea to cut down on plastic, but he isn’t sure that he wants to be quite as focused on it as his mom.

“I try to avoid buying any new plastic at all,” she said.

That means all of her plastic containers are from the era when she was still buying plastic, which means they are at least 1 1/2 years old.

“Knowing how long I’ve been using these for and knowing how long I can continue using them for, it outrages me that we would still be producing this kind of plastic packaging. It’s just not going to ever degrade.”

“Knowing how long I’ve been using these for and knowing how long I can continue using them for, it outrages me that we would still be producing this kind of plastic packaging,” she said. “It’s just not going to ever degrade.”

When they’ve selected a few containers and picked up shopping bags, Robb and Haydn head out the door and walk down their quiet residential street. Like many Londoners, they can go to their nearest shops on foot. 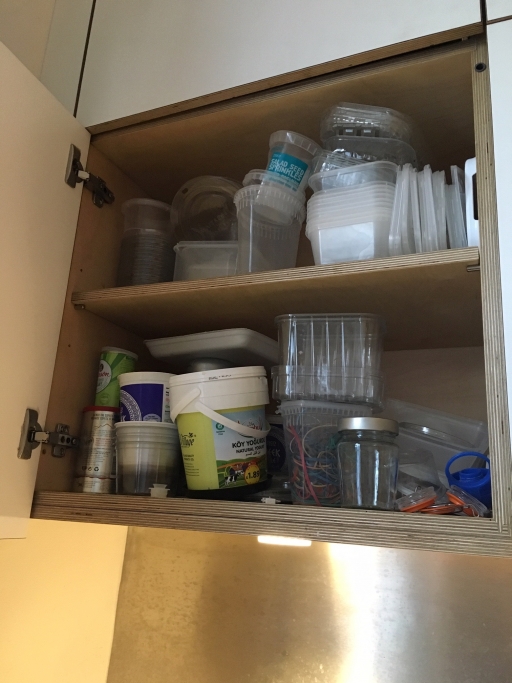 Philippa Robb always brings her own containers when she goes shopping. She’s had all of these containers for at least a year and a half, as they date from the era when she was still buying plastic.

“We’ve got every supermarket you can imagine under the sun within a mile radius of us,” she said. “But to go plastic free, I can’t be going into those places.”

Instead, she prefers to shop at small, local places like Nut Case, a modest storefront on Uxbridge Road, with a squirrel on its sign. Inside, the shop is filled with bins of dates, cranberries, almonds and baklava. Robb hands the owner, Kalil Chedid, her own plastic bag (which she says she’s used at least 20 times) to fill with coffee beans.

Chedid provides his customers with small plastic bags, but says that more and more of them are choosing to bring in their own containers like Robb. He says she was “definitely one of the first.”

He points out a poster that he just hung up, inviting customers to bring in their own containers. It’s the result of Philippa working on him for months.

“Kalil, this is great,” Robb said, grinning widely. As she leaves the store, she says it really lifts her to see changes like this taking place in the neighborhood.

Uxbridge Road is home to quite a few small, Middle Eastern-owned groceries. Robb and Haydn’s next stop is Al-Dimashqi, which has a colorful array of produce out front. They pick out loose pieces of fruit instead of ones that come wrapped in plastic.

“The fun thing about shopping naked is that you can choose what fruit you buy.”

“The fun thing about shopping naked is that you can choose what fruit you buy,” Robb said, examining a lemon.

Back at home, Robb plops her groceries on the counter, right next to her trash can — which is a family-sized yogurt container.

Related: As the world grapples with plastic, the US makes more of it — a lot more

“This is probably about a quarter full, maybe, and this is about 10 days worth of rubbish,” she said.

Robb’s decision to cut out plastic is part of her drive to reduce the amount of waste she sends to the landfill. She feeds leftover food to the three chickens she keeps in her backyard and composts the rest. She recycles the tin cans, glass bottles and paper she uses. So, the only contents of her tiny trash can are a few scraps of fabric, some plastic labels from fruit and two old white-out bottles. 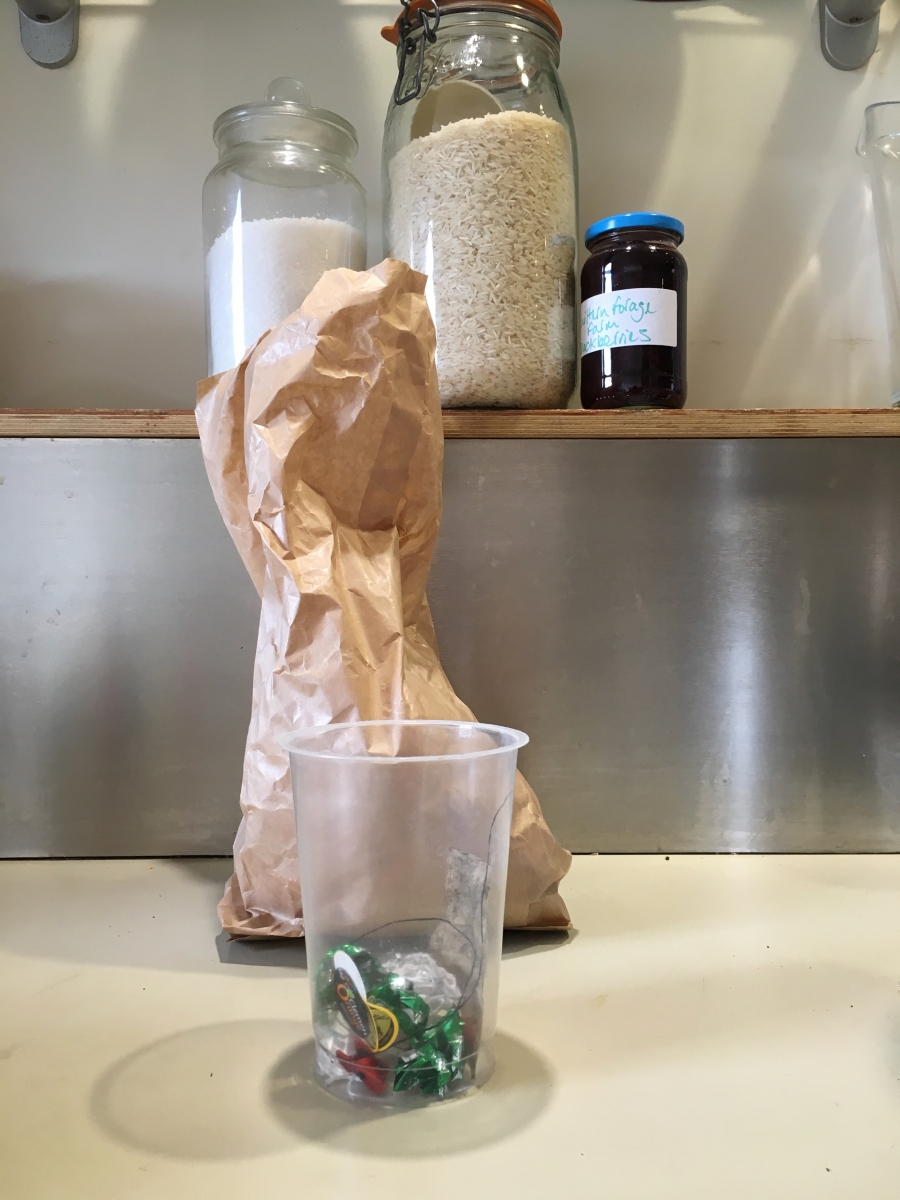 Since going plastic-free, Philippa Robb has started using this family-sized yogurt container as a trash can. She says it takes a least a month to fill it up and, when it is full, she simply empties it in a public trash can. In this photo, it contains wrapping for a bouillon cube, a bit of floss that turned out to have plastic in it, string from the packaging for chicken feed and a few bits of plastic that she found in her yard. She says she’s had the container itself since at least 2017.

This yogurt container of garbage represents all the changes that Robb has made to cut out single-use plastic and reduce waste. But it didn’t all happen in a day.

She’s always been environmentally conscious, but her real journey started 10 years ago when she left a job at the BBC World Service and began teaching people how to ride bikes safely in London. She was working outdoors, seeing birds, trees and flowers on a daily basis.

Related: Want to help the planet? Ditch your grocery cart for a meal kit.

“You know, it sounds a bit kooky, but that propelled me forward into thinking, 'What are we doing to this planet that we live on?'” she said.

She took baby steps at first. For example, she decided to keep her old shampoo bottles and refill them instead of buying new ones.

Six years later, she still has the same bottles.

Then, in January 2018, she decided that she would stop buying plastic entirely. But the decision wasn’t without sacrifice.

“We miss cheddar cheese. That mainly comes wrapped in plastic.”

“We miss cheddar cheese,” she laughed. “That mainly comes wrapped in plastic.”

Aside from dairy products, she also said it took time to wean herself off of take-out coffee. Now, she tries to always have a mug on hand.

Occasionally, she has to make exceptions — like when one of her young students gave her a packet of dried fruit wrapped in plastic as a gift.

“I’m not going to tell a kid, ‘I’m sorry, I’m plastic free,’” she said. She admits she can be quite harsh with the adults around her, though.

When they hear about her lifestyle, “Suddenly, people start seeing the level of plastic that they’ve got in their handbags or just around them and they start to feel uneasy and guilty about it,” she said. She often lets them sit in that guilt. 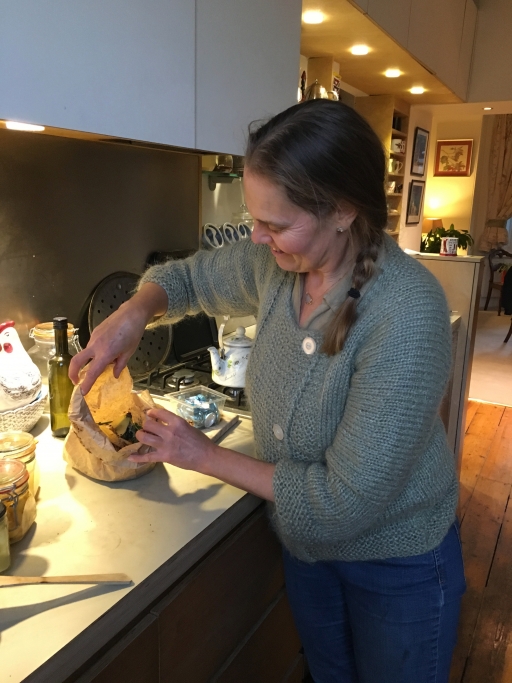 Philippa Robb puts coffee grounds into a bag, ready for compost. She only composts food leftovers a soup kitchen that her church organizes once a week.

“It depends on the person and my mood,” she said. “But I can be quite harsh.”

In spite of her commitment, she does have moments of doubt. Like, do these small consumer choices really matter?

“I’m only one person,” she said. “There are how many billions of us living on this planet?”

She says it’s getting easier now because there are more people trying to go zero waste.

“So, I no longer feel as if I am on the fringes as much as I felt about six to nine months ago,” she said. “I feel less defensive about my choices.”

Haydn is mostly cool with his mom’s ideas. He’s all for cutting out plastic at home. But he says it is a lot harder when he is out with friends.

“I don’t particularly like saying, 'I don’t want to be using plastic.' Not because I am ridiculed for it. Because now it is seen as a good thing to do. But because it does involve drawing attention to oneself.”

“I don’t particularly like saying, 'I don’t want to be using plastic,'” Haydn said. “Not because I am ridiculed for it. Because now it is seen as a good thing to do. But because it does involve drawing attention to oneself.”

But despite this discomfort, Haydn did go talk to the student government at his school about the amount of plastic used in the cafeteria.

“Now, we have a paper takeaway box and wooden cutlery, which is an improvement,” he said.

Robb is incredibly proud of her son for this. She says she doesn’t know if he’ll choose to live waste-free when he’s older, but he’s on his own journey. And, ultimately, that’s what she advises everyone to do.

“You don’t have to give plastic up tomorrow morning,” she said. “I think start small. Start with something achievable. And then congratulate yourself for every step that you have taken.” 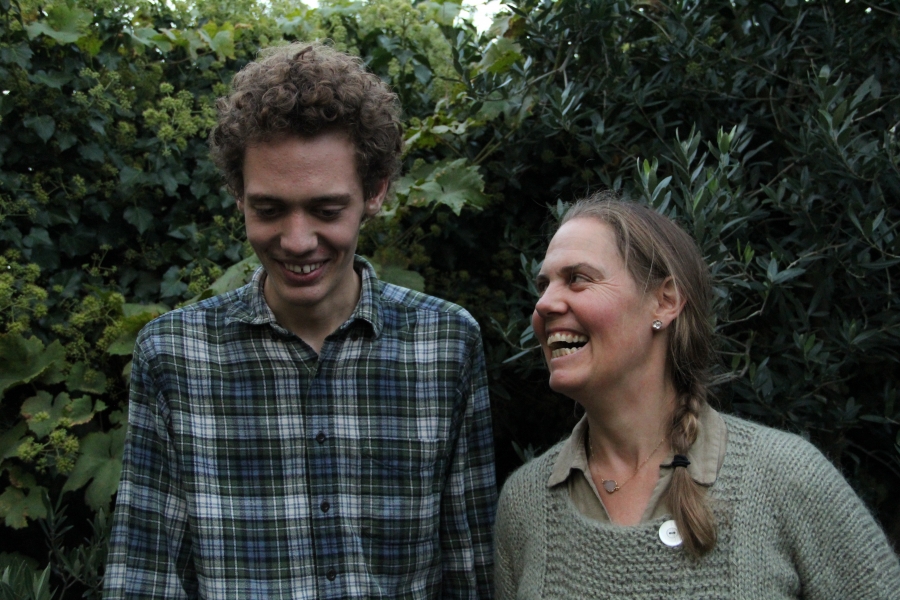 Philippa Robb and her son, Haydn Robb Harries, pose in the backyard of their west London home.