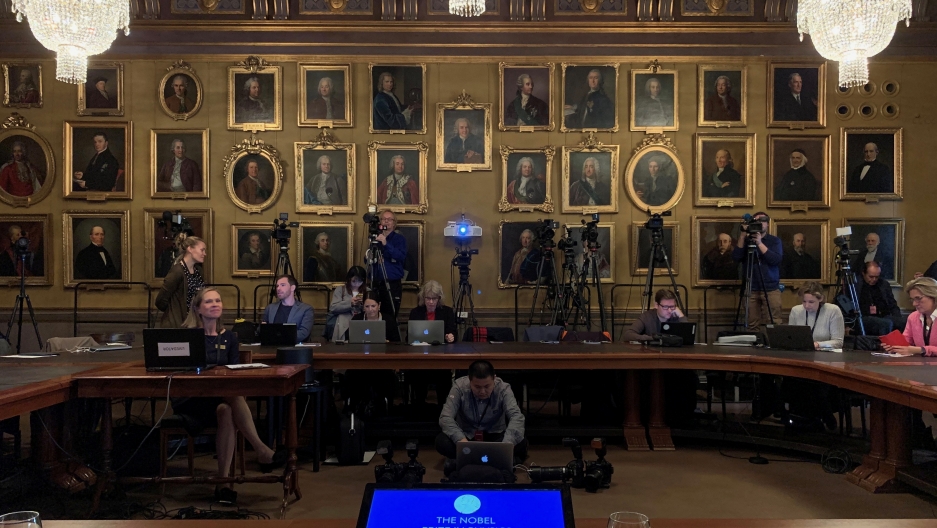 Journalists get ready for the announcement of the winner of the 2019 Nobel Prize in physics at the Royal Swedish Academy of Sciences in Stockholm, Oct. 8, 2019.

The 2019 Nobel Prizes for chemistry and physics were awarded this week, and — as is the case most of the time — they went to men. That’s despite steps the Royal Swedish Academy of Sciences, which runs the Nobel program, took just last year to be more inclusive.

The academy's secretary-general, Göran K. Hansson, sent a letter to scientists asking them to take geography and gender into consideration in their nominations and asked more women to suggest candidates.

But efforts to diversify Nobel winners are slow going, and there’s a long history to overcome: Of the more than 600 Nobel Prizes that have been given out in the sciences, just 20 have gone to women. Some other prize categories, such as peace and literature, are more diverse, but they are considered more “acceptable” for women. (The 20 awards include prizes in physiology or medicine, chemistry and physics.)

But those prizes have also had their challenges. The Nobels haven’t been spared from modern movements like #MeToo; last year, because of a complicated sexual harassment scandal, the Royal Swedish Academy didn’t award a prize for literature — so there are two awards in that category this year.

Hansson told the journal Nature that he couldn’t do more to increase diversity because of a covenant laid down by the original funder of the prizes, Alfred Nobel, who invented dynamite. Nobel explicitly said nationality shouldn’t be considered in awarding winners.

“It’s important to remember that the Nobel Prize is awarded for discoveries and inventions, and those who receive it have made major contributions to humankind, and that’s why they get the prize.”

“It’s important to remember that the Nobel Prize is awarded for discoveries and inventions,” Hansson said at the 2018 press conference to announce the Nobel Prize winner for physics, “and those who receive it have made major contributions to humankind, and that’s why they get the prize.”

At that press conference, Canadian Donna Strickland was named winner for her work on lasers. She became the first woman to receive a Nobel for physics in 55 years. She took questions from reporters, and seemed surprised when one told her she was only the third woman ever to earn a Nobel for physics. (It went to French physicist Marie Curie in 1903, who was also awarded the Nobel in chemistry in 1911, and German-born American physicist Maria Goeppert Mayer received the physics Nobel in 1963.)

The scene was not quite the same this year when the Nobel committee announced its prize for chemistry to three men in an Oct. 9 press conference.

“I thought there might have been more,” Strickland said. “Obviously, we need to celebrate women physicists because we’re out there. And hopefully, in time, it’ll start to move forward at a faster rate, maybe. I don’t know what to say. I’m honored to be one of those women.”

(Strickland was promoted to full professor within weeks of the announcement of her Nobel win.)

Hansson, joining in, said, “We expect more to come.”

There’s no way to know who’s been nominated for a Nobel; those names are kept confidential for 50 years. So, at that 2018 press conference, a reporter asked just for the percentage: How many women were among the total number of nominees? Hansson said he didn’t have that in front of him.

“It’s a small percentage that’s for sure,” Hansson said. “And that’s why we’re taking measures to encourage more nominations. Because we don’t want to miss anyone.”

His academy colleague, physics professor Olga Botner, added that the percentage is small because a few decades ago, there were many fewer women in science.

“So, the number has been increasing steadily over the years, but the number of nominations rather reflect the percentages as they were, say, two or three decades back in time,” she said.

But is it? Liselotte Jauffred investigated.

“I think it was a dinner table discussion,” said Jauffred, an associate physics professor at the Niels Bohr Institute at the University of Copenhagen. “We were thinking, ‘Is it just by random that they only chose men?’”

So, she and her colleagues used historical data and modeling to find out if the smaller number of women in scientific fields fully accounts for the low number of female Nobel laureates. They published a paper about it last October. The results, Jauffred says, are clear — even accounting for fewer women in the sciences throughout history, women are underrepresented among Nobel Prize winners.

“With 95% probability, there is a bias against women,” she said.

And there are plenty of examples of women who seem to have deserved the Nobel Prize.

Claudia Rankins, co-founder of the Society of STEM Women of Color, points to Lise Meitner, the Austrian physicist who Rankins argues discovered nuclear fission. Meitner fled Nazi persecution, but refused to work on the Manhattan Project to develop the atomic bomb. Her teammate, Otto Hahn, was awarded the Nobel Prize for their work in 1944.

“And that's just one example,” said Rankins, who is also a program officer at the National Science Foundation, but is speaking here only of her personal views. “I'm sure you can find throughout history, and even now, many other examples where men and women worked side by side, and the man gets the prize.”

The Swedish Academy can’t give Nobels to those who might have been overlooked; its own rules don’t allow posthumous awards.

Women and people of color are still underrepresented in many scientific fields. And they don’t rise as fast: Rankins points out that when Strickland won the physics Nobel last year, she was still an associate professor at the University of Waterloo in Ontario, Canada, despite her accomplishments. Recent studies suggest that women have been winning more science awards, but those awards often pay less, are lower status, and have to do with teaching, not research.

Rankins said being a woman or minority in a largely white, male field can still be a daily hardship.

“It takes a toll on you on your health and well-being,” she said. “And then for somebody to say, ‘Hmm, there are only white men scientifically advanced enough to be worthy of the Nobel Prize,’ just sort of adds insult to injury.”