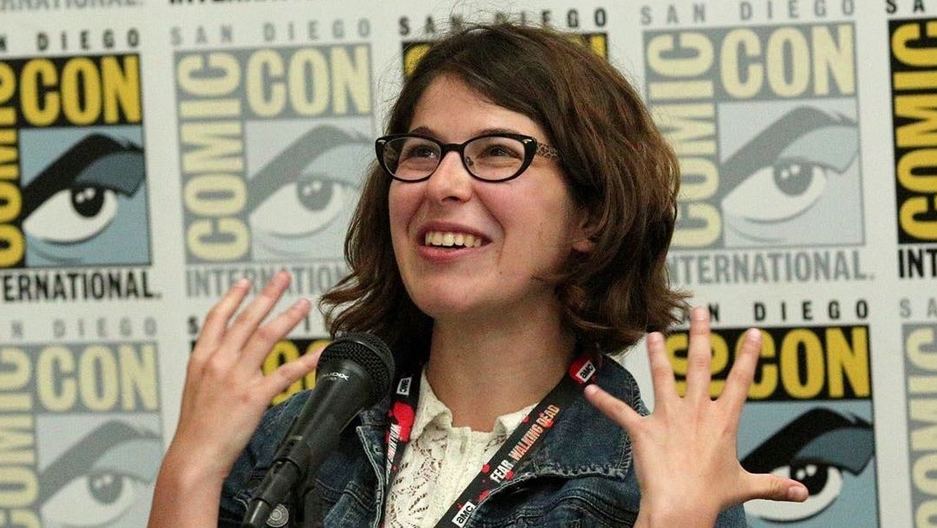 The writer and illustrator Rachel Ignotofsky wanted to tell the stories of women scientists.

For writer and illustrator Rachel Ignotofsky, the idea to profile 50 pioneering female scientists in her recent book, “Women in Science,” was spurred by conversations with educator friends. As they talked about the gender gap in science, technology, engineering and math fields, Ignotofsky realized women aren’t just underrepresented in STEM, itself — the stories about their contributions don't get much play, either.

“So, what happens to young girls and boys when you're not introduced to these strong female role models, who all throughout history have made an immense impact on the sciences?”

In her book, she calls out those STEM gender gap statistics in fluorescent pie charts. And the 50 women scientists she highlights are illustrated even more boldly, sketched in bright purples and greens against dark backgrounds, and surrounded by symbols of their work. Ignotofsky says she used the colors and props to make the women “pop off the page and give you this sort of excitement and wonder that they're feeling while making their discoveries.”

The illustrations do pop off the page, a striking visual that lingers for the next time you close your eyes and envision what a scientist looks like. To boost your imagination, Ignotofsky shared details about five groundbreaking female scientists in an interview with Steve Curwood of PRI’s Living on Earth.

“She's really known for being a movie star. She was called the most beautiful woman in the world, but what a lot of people don't know is that, in fact, she had this need to invent. She had a secret laboratory in her room where she would experiment. Actually, she was married at one point to an arms dealer, back where she lived in Germany, and she escaped him and came to America.

"But when she was [in Germany], she learned a lot about technology and torpedoes, and when she was in America and World War II started, she wanted to do what she could to help. She knew that torpedo signals often got jammed. So, together with the composer George Antheil, she created FHSS technology, which was a frequency that actually would change and switch much like a player piano. That's kind of where they got the idea for it.

"George Antheil at the time was working a lot with player pianos, and they created this technology and it worked really well: Torpedoes wouldn't get jammed. And they patented it, and they presented it to the [United States] government, but they did not take her seriously, and they shelved her idea. And she helped the war movement the way that they would allow her to, which was in a kissing booth, raising money for war bonds.

"Later, much later, during the Cuban Missile Crisis, they realized what a wealth of technology this was, and they started applying her patent — which was expired at the time — to missiles. And now we use it in Wi-Fi and our cell phones and Bluetooth every single day. So, it's one of those bittersweet stories where, yes, she got the recognition that she deserved at the end, and, yes, now her technology is readily available and used by everyone. But just think about all that wasted time in between World War II and the Cuban Missile Crisis where she could have been developing even more technology and been taken seriously.”

“She [was] a social scientist and a psychologist, and she's best known for her participation in the Civil Rights Movement with the color doll test that she developed with her husband Kenneth Clark. That's the test that was used as the basis of the argument to win the court case during Brown v. Board of Education and end segregation.

"But her work actually started much earlier than that. She always wanted to work with kids, and when she was getting her master’s, she decided to focus on preschoolers. She wanted to know if preschoolers identified with their race. At the time, people thought that kids that young didn't understand that they belonged to a race, but she proved through picture tests that kids as young as 3 or 4 understood that they were white or black, and this was her big aha moment. She realized that she could do this work in race and objectively prove that segregation was damaging children.

"So, she wanted to know what happens to a child when they're separated. So, she did the doll test, and, for those who don't know, it was a test that was given to kids in segregated and desegregated schools. They had identical-looking baby dolls. One was black, one was white, and they would ask questions: ‘Is this doll pretty?’ ‘Is this doll good?’

"And, overwhelmingly, the black children in segregated schools would only choose the white dolls, and they would say that the black doll was ugly and bad. In turn, they thought they were ugly and bad because they were separated. I just really wanted to include her in this book to show that science can be used to change society, can be used for social good, for the better.”

“She was one of the leaders in oncology, and she grew up during a time where most women weren't doctors. There were few African American doctors, as well. So, she started working with her father, and her father was a very famous doctor, already in the field of oncology, and they started working together. And when he died, she took over the department, and she became the youngest head of a department in cancer research, and she started looking at cancer in a new way.

"At the time, people didn't really understand chemotherapy. You would take the chemotherapy and just nuke the whole body, but she thought there could be a different way. Instead, she started testing tumor samples outside the body, creating individual cocktails for patients that they would respond to the best, and she also developed a catheter system. So, instead of having to nuke the whole body, she would just go in and treat just the organ that was being affected by the cancer.

"She went on to be the founder of an oncology foundation, and she saved countless lives doing it.”

Vera Rubin, born in 1928 in Pennsylvania

“Vera Rubin gave us the ultimate proof that dark matter exists in this universe. That's huge. She was kind of looking at the movement of galaxies, and she was thinking that they would move the same way that solar systems did. When you're further away from the gravity point — and in a solar system the gravity point is the sun — you move slower. But when she was looking at these galaxies, that was not the case. In fact, everything moved at the same speed. And what was causing that?

"It meant that there must be this invisible gravity source that was floating throughout the universe. And this invisible, undetectable gravity source was dark matter. And this was affecting the way that the entire universe moved and also, through her studies, she figured out that it made up most of our universe. And so scientists still don't know what that is, and there is still so much that we still need to learn about dark matter. But by studying movement, she had the most undeniable proof that this was something that was real — that even though we can't see it, it's impacting our universe.”

“We're not really sure of the date that she was born because it was during the Japanese occupation of Hong Kong, and her mom was illiterate. But her mom did everything she could to make sure that her and her brother got the best education that they possibly could. And she wasn't going to go to college unless she got a full ride, and the only place that gave it to her was Vassar.

"They paid for everything: her food, her clothes, her books, her dorm room. And she came over on a boat with just a little pocket change and some cake. And she had three goals, to make three major discoveries in her life, and she did.

"She had an interest in particle physics. She wanted to find out what all this stuff in the universe was made out of, and that meant what are the particles an atom is made out of. After discovering the charm quark, she went on to discover gluons, and gluons are kind of the stuff that holds all of the subatomic particles together.

"After those two discoveries, she made a really big one. She led a research team that discovered the Higgs boson. And bosons kind of give mass to these subatomic particles, and they make the whole thing work. They make everything kind of just stick together and work, and they are the reason that, you know, we're not just falling apart and flying off into a million pieces. So with the particle accelerator, she got to work, and she said it was going to be as hard as finding a needle in a haystack the size of a stadium, and, yes — she made her third discovery.”