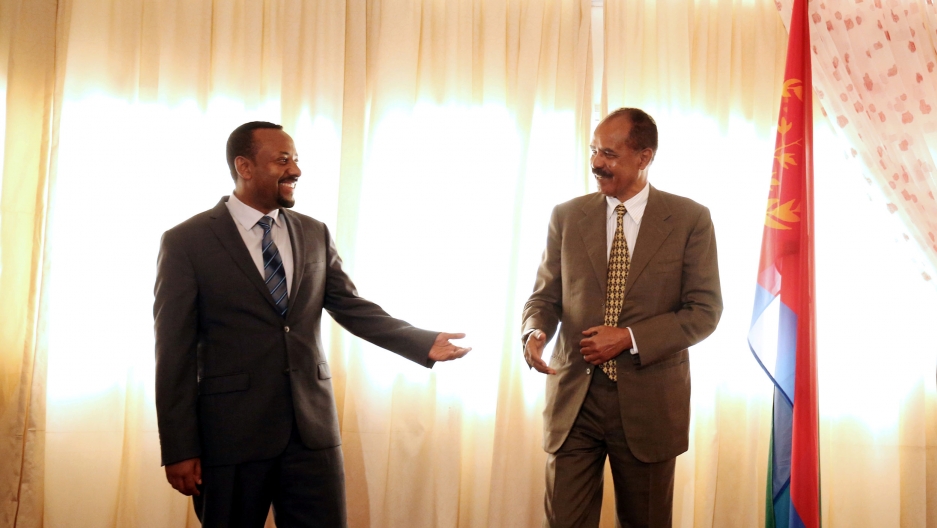 During a high-level meeting at Ethiopia's foreign ministry in July, officials were shocked by social media reports that their prime minister was visiting Eritrea.

No one in the room had been informed of Abiy Ahmed's trip, his second since clinching a peace deal last year that ended two decades of hostility between the neighbors.

"The foreign office was not in the loop," said a senior official who was present. "We learned of it from the Eritrean media, on Facebook and Twitter."

The surprise visit is typical of Abiy, who both fans and critics say often relies on bold personal initiatives and charisma to drive change instead of working through government institutions.

Nebiat Getachew, the foreign ministry spokesman, said policy was well coordinated. He did not confirm if Abiy had made the July trip without informing the ministry.

The deal with Eritrea won Abiy international plaudits. He is the bookmakers' second favorite to win a Nobel Peace Prize on Friday, after climate activist Greta Thunberg.

It is unclear how much of the fractious ruling coalition — some form of which has been in power since 1991 — backs his reforms, or how durable those reforms would be without his leadership. He has already survived one assassination attempt: a grenade thrown at a rally last year.

"None of Abiy's promised transformational reforms are going to have any solid foundations unless he works through the institutions," she said.

Ethiopia has been among Africa's fastest growing economies for more than a decade. But uncertainty over Abiy's ability to carry out all his reforms worries both citizens and the foreign investors he has been courting to develop the country's antiquated telecoms and banking sectors.

Some observers say Abiy, a former military officer specializing in cyber intelligence, will sometimes bypass ministries because his reforms must maintain their breakneck momentum or become mired in bureaucracy.

"Abiy seems to have relied on his charismatic rule," said Dereje Feyissa, a professor at Addis Ababa University. "The question is whether this is sustainable. Euphoria is subsiding."

Other observers say Abiy's rapid changes are a deliberate attempt to wrong-foot opponents from the previous administration, which was dominated by Tigrayans, a small but powerful ethnic group.

Abiy, 43, is from the Oromo group, the nation's largest, which spearheaded the protests that forced his predecessor to resign. Since taking office in April 2018, Abiy's government has arrested or fired many senior officials — mainly Tigrayans — for corruption or rights abuses.

"In the first six or seven months, he undercut the institutions ... The institutions were either not working or working against his agenda," said Jawar Mohammed, an Oromo activist and informal adviser to the prime minister.

"I don't think he could have traveled this far without doing that."

One of Abiy's biggest victories was the peace deal, signed in July last year, which ended a nearly 20-year military stalemate with Eritrea following their 1998-2000 border war.

Asle Sveen, a historian who has written several books about the Nobel Peace Prize, told Reuters the deal made Abiy exactly the kind of candidate Alfred Nobel had envisaged for the prize.

"The peace deal has ended a long conflict with Eritrea, and he is very popular for having done this, and he is doing democratic reforms internally," Sveen said.

But some benefits of the peace were short-lived. Land borders opened in July but closed in December with no official explanation.

"Last year's rapprochement appears to have been partly due to the Eritrean president's belief that Abiy's rise marked the eclipse of Tigray's ruling party, which had been his prime antagonist for more than two decades," said Will Davison, an Ethiopia analyst at Crisis Group.

"But although it has lost power at the federal level, Tigray's ruling party remains firmly in control of its own region, which includes a long border with Eritrea, partially explaining why relations between the two nations haven't warmed further."

The foreign ministry has been "completely sidelined," said the senior ministry official, adding that "our interests abroad may be jeopardized."

He said Abiy had engaged with Eritrea, Somalia and wealthy Gulf states on major policy issues without building consensus within his government.

"There is always a well-coordinated foreign policy and diplomacy implementation within the Ethiopian government," he said. "Any other claims are simply baseless."

Some nations are pleased by Abiy's personal touch.

After Sudanese police killed more than 100 protesters in June, Abiy flew to Khartoum to convince Sudan's new military rulers and the opposition to restart talks, and persuaded Saudi Arabia and the United Arab Emirates to back his mediation. The talks led to a power-sharing accord in August.

"Abiy played a key role," said Amjad Farid, a senior representative of the civilian group that led talks with the military.

Abiy has pushed through reforms at home and abroad. His public renunciation of past abuses drew a line between his administration and that of his predecessor.

But ethnically tinged violence flares frequently, and systemic attempts to address past injustices have been slow. A reconciliation commission set up in December has an unclear mandate, lacks expertise and has only met twice, said Laetitia Bader, an Africa researcher at Human Rights Watch.

"The jury is still out on whether the move will be more than mere window dressing," Bader said.