So say world leaders as countries struggle to cope with the coronavirus pandemic. The unprecedented outbreak has pushed governments to take extraordinary measures unheard of in peacetime — including closing borders and instituting nationwide lockdowns. People all over the globe are increasingly required to carry permits or face fines for leaving their homes.

"This crisis could ultimately have an impact as serious as a world war in terms of the number of people affected, in terms of the impact on the economy and on people's way of life,” former US Ambassador to NATO Nicholas Burns told The World.

Governments have gotten the message.

French President Emmanuel Macron said Monday the invisible spread of the virus “requires a call to arms,” as he locked down the country.

United States President Donald Trump echoed the sentiment, tweeting, “The world is at war with a hidden enemy. WE WILL WIN!” He also referred to himself as a “wartime president” in a Wednesday press briefing, a statement that is without legal significance.

COVID-19 — which poses inordinate risk to the elderly and immunocompromised — has required extensive government measures across the globe to slow the spread of the highly contagious virus. Vulnerable health infrastructure systems unprepared for massive patient influxes also need support.

Under such circumstances, history has shown there is a very fine line between protecting citizens and eroding their civil rights — and that line can be exploited in times of great uncertainty.

"... once governments develop new capacities, they find it hard to let them lapse.”

“Even without any malevolent intent, major economic crises and wars usually lead to an expansion of the state and greater intrusions into people's lives,” said Scott Radnitz, associate professor of international studies at the University of Washington. “This can be for the better ... But sometimes once governments develop new capacities, they find it hard to let them lapse.”

China was the leader of lockdowns after COVID-19 was discovered in the city of Wuhan. At the time, such measures seemed extreme and draconian.

But “it would be foolish to believe that China’s decisions have been mainly based on crude authoritarianism,” wrote Ian Johnson for The Washington Post. “Some of its policies were motivated by serious concern for the public good and executed by a highly competent civil service.”

But political context matters when governments move to limit civil liberties, especially for countries that have a history of authoritarian leadership. China's efforts — though successful in leveling the virus’ spread — also included stifling information about COVID-19, and spreading conspiracy theories.

In the Philippines — a partly free country where public movement has been limited to essential needs, like food and medicine — strongman Rodrigo Duterte has deployed the police and military to enforce quarantine measures. While it's not unlike steps taken elsewhere it has sparked fear of potential human rights abuses in light of Duterte’s authoritarian enterprises, like his “war on drugs.” Under that policy, characterized as a "large-scale murdering enterprise," thousands have been killed by state authorities.

In Spain, Prime Minister Pedro Sánchez said he is convinced that most Spaniards will comply with the country’s lockdown, but the limits on freedom of movement have also sparked debate in the nation, which has only been democratic since the late 1970s following the death of dictator Gen. Francisco Franco.

Related: In the shadow of Franco’s legacy, Spain faces its fascist history

Even in well-established democracies, there have been concerns about the lasting consequences of pandemic responses. In Israel, Prime Minister Benjamin Netanyahu ordered security services to use cellphone data to identify citizens who should be quarantined and has shuttered the courts — just as he was about to go on trial for corruption. Both initiativeswere announced in the dead of night.

"We cannot surrender transparency and oversight.”

“These are exceptional times that, unfortunately, call for exceptional measures in order to save lives,” Benny Gantz, Netanyahu’s political rival, said Tuesday. “That said, we cannot surrender transparency and oversight.”

In a public health pandemic, firm restrictions are warranted, particularly when individuals demonstratively make choices that affect the greater good. Dr. Anthony Fauci, the top infectious disease expert in the US, has not discounted the possible need for a “national shutdown.”

“Many of us were too selfish to follow suggestions to change our behavior,” wrote Italian writer  Mattia Ferraresi of the casual attitudes toward initial restrictions put in place when the outbreak reached Italy. The country is now the worst affected after China. “It took weeks after the virus first appeared here to realize that severe measures were absolutely necessary.”

And in the United States, where individualism is a key element of the national ethos, the fine line between freedom and safety is increasingly clear.

Historical legacies in the US 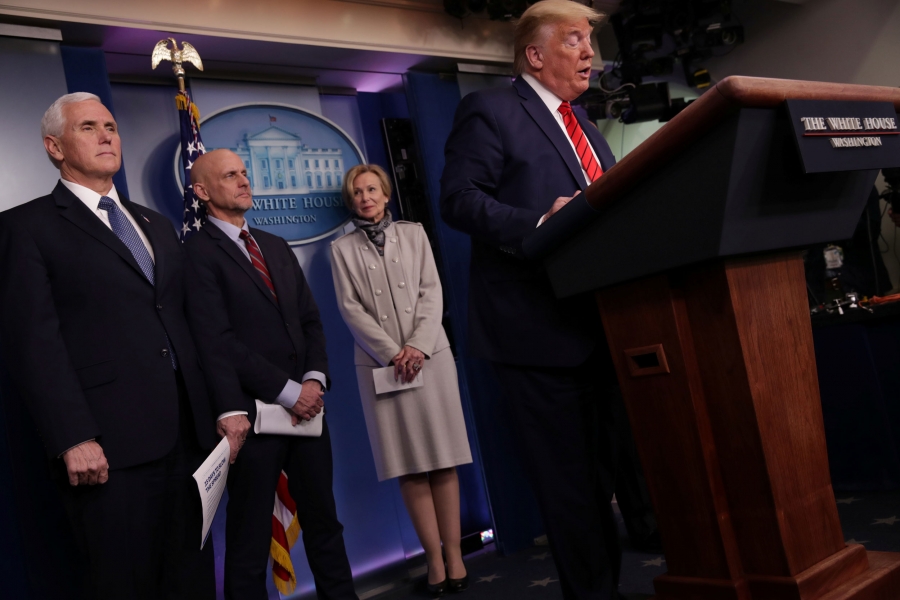 In the US, Trump has slowly come around to recognizing the serious nature of this pandemic. He has called for massive economic stimulus legislation, and last Friday, he announced a national emergency under the Stafford Act, a public health and disaster relief law, which allows states to tap into more than $42 billion to respond to growing needs of the coronavirus outbreak.

"[Trump] is so worried about the economy and his reelection, he had to be pressured into declaring a national emergency ..."

"What has struck me initially in the current crisis is how reluctant Trump has been to use the prerogatives of the presidency. A year ago, Democrats might imagine he would have soldiers in the streets by this point," Radnitz said. "But in fact, he is so worried about the economy and his reelection, he had to be pressured into declaring a national emergency and invoking the Defense Production Act."

Democratic Senate Minority Leader Chuck Schumer tweeted, “We've been calling for President Trump to do this for days. Americans will support an emergency declaration to extend assistance to Americans who need it. But he must not overstep his authority or indulge his autocratic tendencies for purposes not truly related to this crisis.”

For years, Congress has been concerned that emergency declarations invoked by the executive “may be used as political tools — especially during election years,” according to the Congressional Research Service.

“It’s often the case that governmental power expands in time of emergency and doesn’t revert fully back to the status quo ante after the emergency has passed,” Richard Primus, a constitutional law scholar at the University of Michigan wrote in an email. “Historically, the years of the Civil War, World War I, and World War II all saw important expansions of the federal government’s authority, and those expansions in important parts remained after the wars were over.”

More recently, following the 9/11 terrorist attacks in the US, federal responses invoked under ostensibly temporary measures have continued to affect lives two decades later. The USA Patriot Act  — which expanded the government's ability to invade privacy, override due process, and punish dissent — remains largely in effect, despite the initial inclusion of sunset provisions.

The wars in Iraq and Afghanistan were also subsequently authorized with little opposition, though now both military actions have come under heightened scrutiny.

Related: Amb Lute on the war in Afghanistan: The US is 'taking a very hard look at itself'

And the impact of the post-9/11 war authorizations have extended to new conflicts, including Trump's ordered assasination of Iranian top general, Qasem Soleimani, early this year. Since 9/11, Congress has done little to stop the executive branch — Presidents George W. Bush, Barack Obama and Donald Trump — from using authorizations far beyond their original scope.

“Congress over many years has passed statutes that give the president extensive powers to act in situations of emergency,” Primus said. “Those statutes were passed on the assumption that presidents would be basically responsible people, and that assumption has turned out to be less than 100% accurate.”

Legislation following the 2001 attacks could also impact the US response to the coronavirus. The Model State Emergency Health Powers Act, written in 2001 out of concern of a biological attack and taken up in some fashion by at least 33 states, expands government authority in times of emergency, including the power to quarantine. The ACLU and legal scholars have warned that such legislation has ethical and civil liberties issues.

For months, Trump toned down the seriousness of the coronavirus, and muddied the waters with misinformation. That pattern of lies and denial are concerning in the context of a presidency that routinely ignores facts and the law. Particularly since his impeachment trial acquittal, Trump has acted in increasing defiance of constitutional checks and balances on his authority.

Related: Trump's hypocrisy on corruption is just what Putin wants

"Given President Trump’s disregard for basic rule-of-law norms, the constitutional Republic was already at serious risk before the pandemic. The pandemic heightens that risk."

“Given President Trump’s disregard for basic rule-of-law norms, the constitutional Republic was already at serious risk before the pandemic,” Primus said. “The pandemic heightens that risk. A country going through a crisis like this could really use some responsible leadership.”

Even as the US and world is struggling to deal with the current pandemic, it is worth remembering the lessons of the past.

“History shows that politicians who are willing to bend rules will find ways to benefit from the crisis,” said Radnitz. “On the other hand, maybe we'll come out of this with a better public health system.”

If measures grow increasingly restrictive — and they may — continued vigilance and checks on power will help ensure democracy does not fall victim to the pandemic.