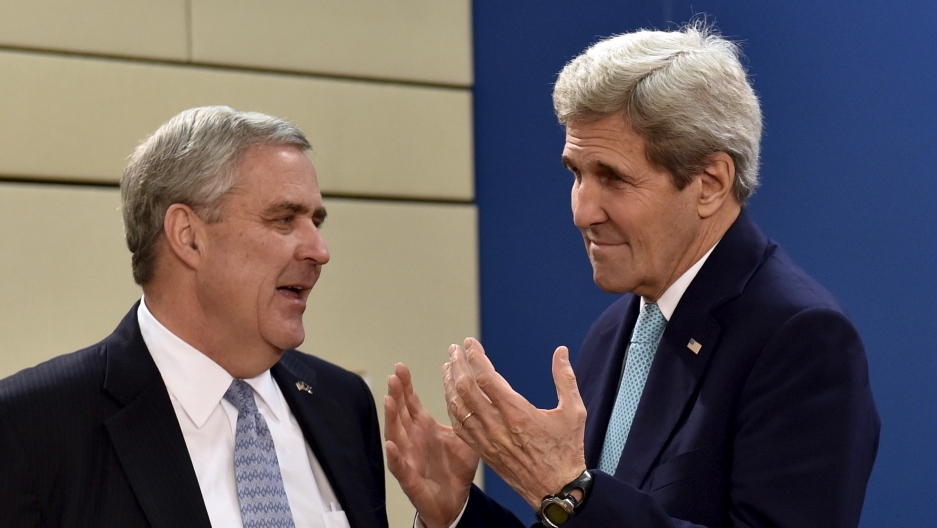 US Secretary of State John Kerry (right) talks with and US Ambassador to NATO Douglas Lute during a NATO foreign ministers meeting at the Alliance's headquarters in Brussels, Belgium, Dec. 2, 2015.

The Pentagon is winning the war in Afghanistan. At least that's what US policymakers have been telling Americans since 2001. But that assessment is full of spin, according to a new trove of documents.

The Washington Post has released a cache of documents that show the war is a failure. It includes previously unpublished interviews and memos long held in secret.

Ambassador Douglas Lute, a three-star Army general who served as the top White House adviser on Afghanistan for presidents George W. Bush and Barack Obama, spoke to The World's host Marco Werman about the war.

"These documents that have now been made public were internal US government documents intended to shine a bright light on the experience in Afghanistan and to learn from that experience," he said. "The government was actually taking, and has been taking, a very hard look at itself, a look at itself in the mirror and see what we can learn."

Marco Werman: So, you told government interviewers, ambassador, in 2015, that those devising the Afghan strategy were devoid of a fundamental understanding of Afghanistan and didn't have the foggiest notion of what we were undertaking. I mean, that's a pretty serious indictment. How did you come to that conclusion, and what were you saying publicly at the time?

Ambassador Douglas Lute: I think the important thing here is context. So, this was an internal government attempt to gather candidly, by way of interviews, lessons from folks who had been involved with policymaking in Afghanistan over a period of years. So, this was never intended to be a headline-making effort.

Why didn't we know about this at the time? Everybody was saying everything was going fine and apparently it was not — it was far from it.

Yeah, no. So, I dispute that a bit. I'm not sure. ​​I don't think the record is absolute that everyone said everything was going fine. I mean, I think those who were carefully watching Afghanistan for a long time now have been much more cautious in terms of their optimism and had been much more balanced in terms of the challenges faced there. I mean, look, things like the poverty level, the corruption level in Afghanistan, the continuing challenges of the Taliban with safe haven in Pakistan — these are not brand new topics to the American public. So, for those who've been watching this carefully, I think it's a much more balanced picture in terms of the challenges faced in Afghanistan. ​

Perhaps for the people watching it carefully. But in terms of relaying what was really happening on the ground to the US taxpaying public — I mean, it was delivered in very Pollyannish terms, and that's not what we read in this report. What was actually happening?

I'm not completely aligned with your view. I mean, look, when we went to Afghanistan, it was the fourth poorest country in the world. The corruption level was endemic. The long-standing problems with the opium production and so forth. So, I think these sorts of notes of caution have nearly always accompanied the indications, the suggestions that we could make progress.

Well, I'm not going to lay the blame for wrongdoing and so forth by way of this interview. But look, anyone who was involved in Afghanistan over the last 18 years has to come away with a sense that this is going to be tremendously hard. And I think that the reports that have now been made public certainly reveal that.

Why is this report valuable?

Well, I think it's valuable in a number ways. One of the reasons that this balance between optimism and skepticism has been perhaps skewed over the years is that we did not establish what I would refer to as continuity in the effort in Afghanistan. We had a revolving door of senior military leaders, policy leaders in Washington, ambassadors on the ground in Afghanistan and Pakistan — all of which served dutifully and served honorably during their periods. But frankly, we didn't establish enough continuity among them so that they could get a deep, textured understanding of what was going on in Afghanistan. So, when I made the comment, we didn't know what we're doing, I mean, that when you sum up over time, we didn't develop enough government expertise over these years to actually come up with a sufficient strategy.