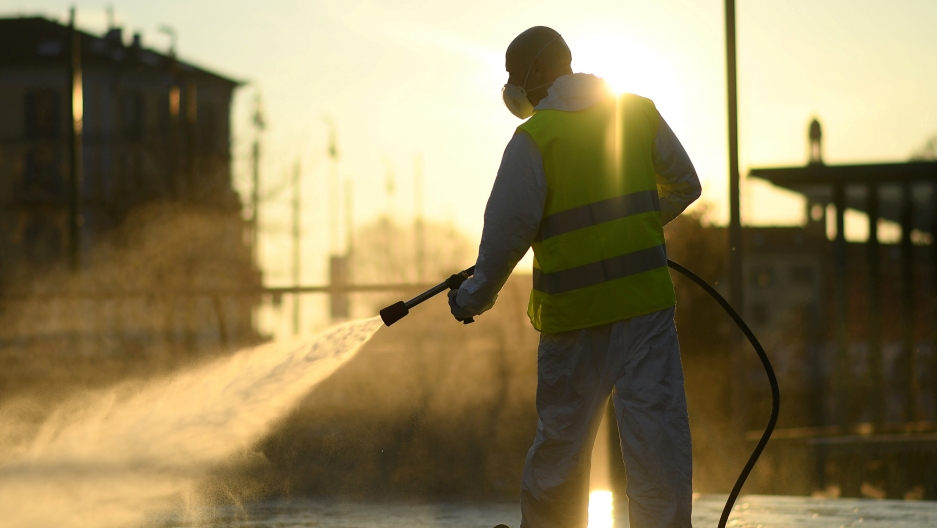 A worker sanitizes a street on the fourth day of an unprecedented lockdown across of all Italy imposed to slow the outbreak of coronavirus, in Milan, Italy, March 13, 2020.

European capitals are taking a variety of steps individually to try to beat back the outbreak. But few countries are working together to combat the spread of COVID-19, the disease caused by the novel coronavirus.

Multilateral diplomacy could be key in stemming the spread of the outbreak says Nicholas Burns, former United States ambassador to the North Atlantic Treaty Organization (NATO).

Related: Lockdowns and entry bans imposed around the world to fight coronavirus

Burns talked with The World's Marco Werman about what steps the international community could be taking together to confront the contagion — and who has the power to lead a global effort.

Burns says that "In a way, this crisis could ultimately have an impact as serious as a world war in terms of the number of people affected, in terms of the impact on the economy and on people's way of life. And so there has to be a local response [as well as] a global response. We see very little of it right now. And that gets to leadership. We need better leadership in many capitals of the world."

Marco Werman: Who is positioned to take the lead? Who do you see?

Nicholas Burns: Certainly, the countries with the greatest capacity to do what has to be done ... by the United States, China, by the European Union governments, by the Japanese and others. These are the countries with wealth, with resources and with capacity. They have to share data, share best practices with our health authorities and what works and what doesn't work; coordinate, obviously, the economic aspects of this, both the fiscal policies — are we all going to stimulate economies together to keep people employed globally? — and coordinate monetary policy. And I think, Marco, the most important thing is a common message of steadiness, of reassurance around the world that we're going to pull together [as] one or not just compete with each other. That is sorely lacking today.

What about Washington in all of this? I mean, even 10 years ago, the US would have been the country the world would appoint to do to lead.

Well, that's right, because you remember back in 2008, during the worst days of the financial crisis, President George W. Bush actually led the way with the French government to create something called the G-20, the 20 largest economies in the world. And they met, they coordinated economic policies that prevented the great recession from becoming a depression. And we need something like that now. But we're not just seeing an absence of cooperation. We're actually seeing outright competition and recrimination — if you think about these outlandish charges by the Chinese government that somehow the US Army planted the coronavirus in Wuhan — which is patently absurd — but you also see on the other side, that some Trump administration officials are calling this the "Wuhan" virus, when in fact, it's not a foreign virus, it's a global virus. And so we need a plan. And we need leadership. The closest thing I can think of, Marco, would be at the beginning of World War II when you had Franklin Delano Roosevelt, Winston Churchill leading an alliance — they set out [with] a common purpose in the Atlantic Charter. They formed an alliance. They battled together. We need something like that. And we're sorely lacking it. We need to demand more from our president and from the other global leaders.

President Emmanuel Macron of France had called for a G-20 call on Monday. It's not clear that's actually going to happen. I mean, is there another place that world leaders can start to kind of build some sense of cooperation?

I think so. You saw it yesterday, Sunday, when the US Federal Reserve Bank, the European Central Bank, the Canadian Central Bank, the Japanese concerted on this rate-cutting. They hoped to send a signal to reassure global markets — that may not have worked, but at least was it a try. And you also are seeing it today when President [Donald] Trump and some of the other G7 leaders — this is Canada, the US, Japan and Europe — are meeting together for a first phone call to try to do something together. It's a start — not sufficient — but at least it's some hope in an otherwise very dark time.