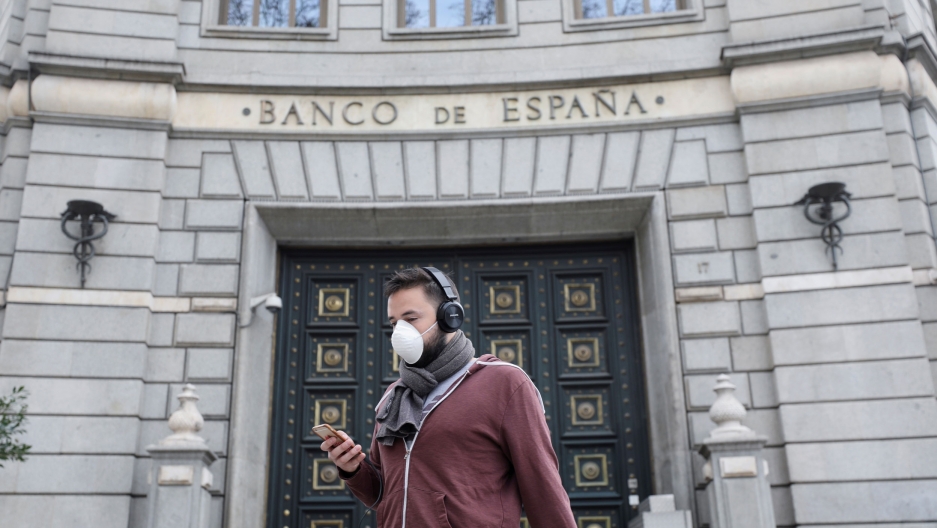 A man wears a protective face mask as he walks past Banco de Espana, amidst concerns over coronavirus outbreak, in Barcelona, Spain, March 14, 2020.

There has been panic buying in Australia, the United States and Britain saw leaders appeal for calm and France and Spain joined Italy in imposing lockdowns on tens of millions of people as the world sought to contain the spreading coronavirus.

Australia has now ordered self-isolation of arriving foreigners and other countries extended entry bans, imposed bans on mass gathering, shuttered sporting, cultural and religious events, while medical experts urged people to practice "social distancing" to curb the spread over the coronavirus that has infected over 156,000 people globally and killed more than 5,800.

Austria's chancellor urged people to self-isolate and announced bans on gatherings of more than five people and further limits on who can enter the country.

All of Pope Francis' Easter services next month will be held without the faithful attending, the Vatican said on Sunday, in a step believed to be unprecedented in modern times.

The services, four days of major events from Holy Thursday to Easter Sunday, usually draw tens of thousands of people to sites in Rome and in the Vatican.

Australian Prime Minister Scott Morrison said from midnight Sunday international travelers arriving in the country would need to isolate themselves for 14 days, and foreign cruise ships would be banned for 30 days, given a rise in imported cases.

Donald Trump tested negative for the coronavirus, his doctor said on Saturday, as the US president extended his country's travel ban to Britain and Ireland.

Last week, Trump had met a Brazilian delegation in which at least one member has since been tested positive.

Travel restrictions and bans, and a plunge in global air travel, saw further airline cutbacks, with American Airlines planning to cut 75% of international flights through May 6 and ground nearly all its widebody fleet.

China tightened checks on international travelers arriving at Beijing airport on Sunday, after the number of imported new coronavirus infections surpassed locally transmitted cases for a second day in a row.

Anyone arriving to Beijing from abroad will be transferred directly to a central quarantine facility for 14 days for observation starting March 16, a city government official said.

China, where the epidemic began in December, appears to now face a greater threat of new infections from outside its borders as it continues to slow the spread of the virus domestically.

Spain put its 47 million inhabitants under partial lockdown on Saturday as part of a 15-day state of emergency to combat the  epidemic in Europe's second worst-affected country after Italy.

Streets in Madrid and Barcelona were deserted on Sunday. All major newspapers carried a front-page wrapper emblazoned with a government-promoted slogan: "Together we'll stop this virus."

Spain has had 193 deaths from the virus and 6,250 cases so far, public broadcaster TVE said on Sunday.

France will shut shops, restaurants and entertainment facilities from Sunday with its 67 million people were told to stay home after confirmed infections doubled in 72 hours.

French Prime Minister Edouard Philippe said the government had no other option after the public health authority said 91 people had died in France and almost 4,500 were now infected.

"We must absolutely limit our movements," he said.

However, French local elections went ahead.

"I am going to vote and keep living my life no matter what. I am not scared of the virus," said a 60-year-old voter, who asked to be identified only as Martine, at a Paris polling station.

Britain is preparing to ban mass gatherings and could isolate people aged over 70 for up to four months as part of plans to tackle coronavirus, Health Secretary Matt Hancock said.

Argentina banned entry to non-residents who have been to any country highly affected by coronavirus in the last 14 days, while Colombia said it would expel four Europeans for violating compulsory quarantine protocols, hours after closing its border with Venezuela.

Starting Sunday, South Korea began to subject visitors from France, Germany, Britain, Spain and the Netherlands to stricter  border checks, after imposing similar rules for China, Italy and Iran which have had major outbreaks.

Visitors from those countries now need to download an app to report whether they have symptoms. South Korea has been testing hundreds of thousands of people and tracking potential carriers using cell phone and satellite technology.