Outside China, South Korea has the highest number of COVID-19 cases. On Tuesday, the Korea Centers for Disease Control (KCDC) announced the number of infections had surpassed 5,000 and attributed at least 31 deaths to the virus.

Related: Volunteers in Wuhan step up to provide aid amid coronavirus outbreak

“The country has entered a war against the infectious disease,” President Moon Jae-in said earlier on the same day during a cabinet meeting, the Yonhap News Agency reported. The leader has ordered all state agencies to operate around the clock and pledged $25 billion to deal with the crisis.

Like Beijing, the Seoul government faces an unprecedented challenge to confront the respiratory illness that has spread to dozens of countries and infected some 90,000 people. But, in stark contrast to China’s hard-handed tactics, such as locking down entire cities and tightly controlling the dissemination of information about the disease, Korea has adopted a gentler policy of voluntary containment and keeping citizens updated on its efforts in near real-time.

Like millions of other South Koreans, Choi Beop-joon receives official emergency alerts on his cellphone every time a new coronavirus case is reported in his area. The messages identify where the patient had been prior to detection and at what time; they urge anyone who might have crossed paths with the individual to get tested immediately.

“I receive three or four emergency messages every day, and they are worrisome.”

“I receive three or four emergency messages every day, and they are worrisome,” Choi, 37, said over the phone from his home in Daegu, a city about 150 miles south of the capital and in the area considered the epicenter of the country’s coronavirus outbreak with nearly 90% of all cases found in this region, according to the KCDC.

Related: COVID-19: Lessons from Singapore and how it handled SARS

Authorities have called on Daegu’s 2.5 million residents to stay indoors as much as possible and minimize contact with others but is not enforcing this request by law.

Choi, who has spent much of the past few weeks at home with his wife and two children, does not regard these emergency alerts as harbingers of only bad news. In fact, he explains, they are somehow comforting.

“The reason why we are receiving so many messages about the rising number of infections is because the government is quickly carrying out tests for the virus,” he said. “I’m happy with the way the authorities are handling the outbreak.”

It’s not only text messages that keep South Koreans informed. The KCDC has opened a coronavirus hotline, holds daily televised press conferences and offers personal hygiene advice that plays on a loop on many buses and in subway stations in Seoul. 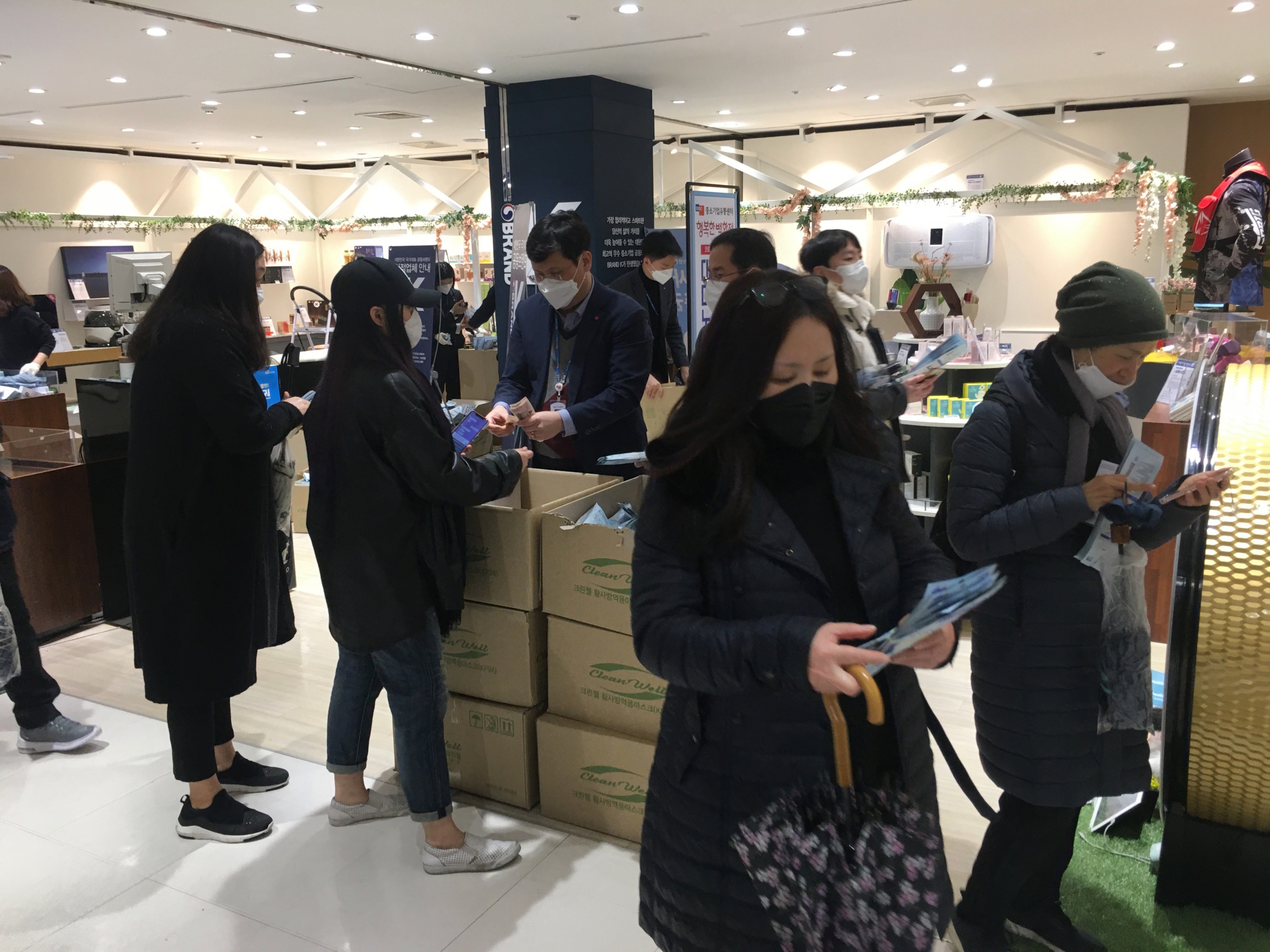 “When taking public transportation, please wear a mask, please make it a habit of washing your hands frequently, when you cough please block your mouth and nose,” an announcement in English says.

Seoul’s information campaign is coupled with health care workers’ ability to rapidly diagnose those showing symptoms of COVID-19. Testing kits that have been made widely available at medical centers enable doctors to determine within a day if a patient has contracted the coronavirus.

The South Korean government has received high marks for its quick response to the outbreak from some medical professionals.

“The way they’re dealing with the virus is really organized, transparent and efficient.”

“The way they’re dealing with the virus is really organized, transparent and efficient,” said Kim Areum, an infectious disease doctor and director of the International Health Care Center at Inha University Hospital in Incheon.

Praise has also come from overseas, with some US-based doctors congratulating Korea on social media for its handling of the epidemic.

Impressive testing going on here. All hail these labs! https://t.co/MmhI2s1HsG

+140 cases overnight in South Korea, now by far the top #SARSCoV2 epidemic country outside China. But at least they are catching them all with their 20k lab 🧪 test runs, which I definitely respect their earnestness and transparency. #COVID19Korea #covid19 https://t.co/qd6VQYXjD9

Very detailed #covid19 reporting from South Korean health officials. They have tested, or are awaiting results on, almost 20,000 individuals; demonstrating a significant diagnostic capability. They appear to have a current testing capacity of more than 3,000 cases a day. pic.twitter.com/iH9yRRFPtF

But, in the United States, officials appear to be unprepared to confront a growing number of outbreaks. US President Donald Trump has pledged 1 million test kits by the end of the week.

The Centers for Disease Control and Prevention has faced criticism for releasing a flawed diagnostics kit in February. And other new testing systems cannot become commercially available until a manufacturer gets approval from the Food and Drug Administration — a process that could take many months.

For these reasons, Kim is unsure if the US has the ability to quickly respond to the coronavirus in similar ways as South Korea. 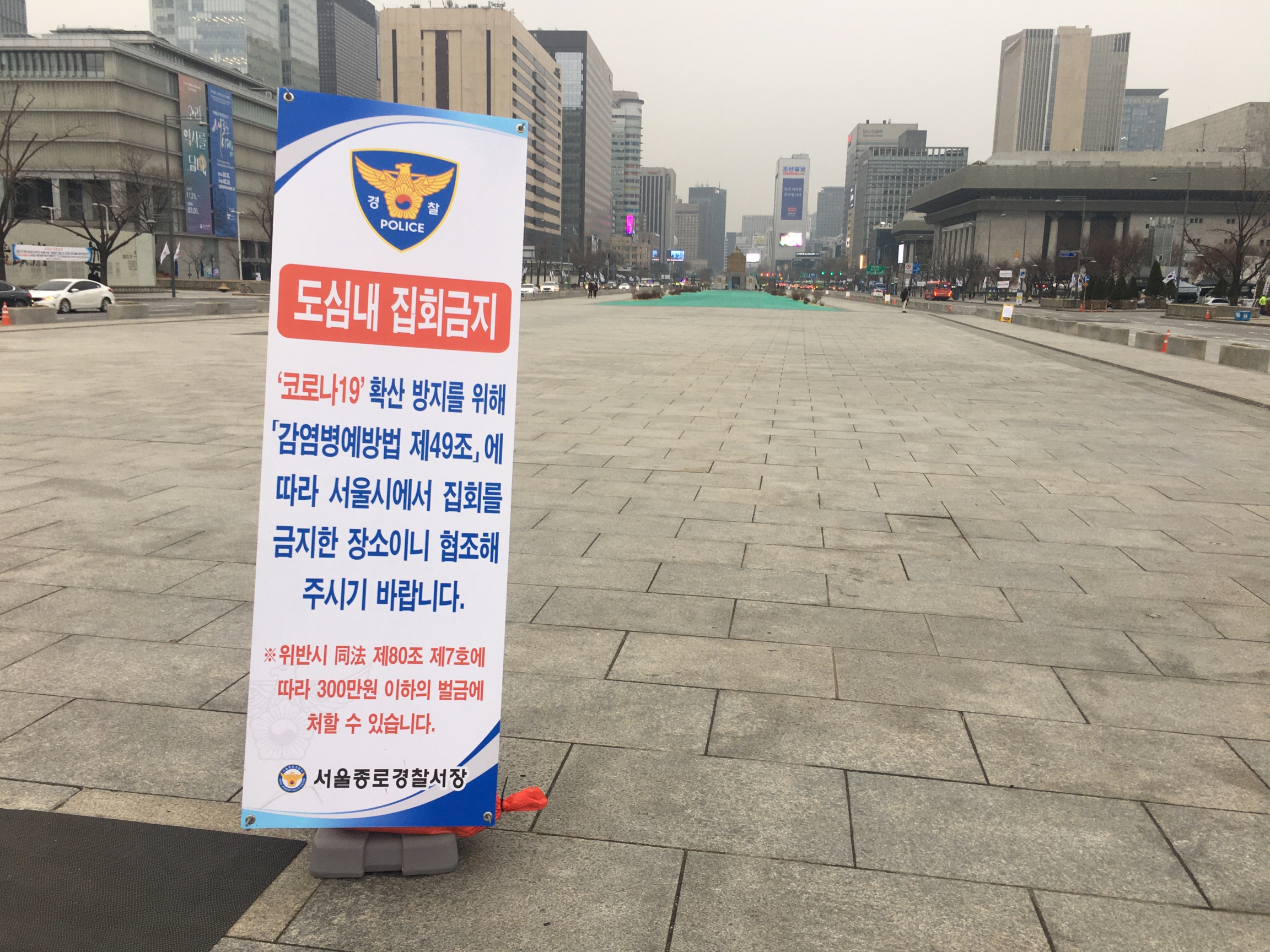 Seoul, South Korea, has banned protests during the coronavirus outbreak. A sign warns that violators will be fined nearly $3,000.

“We approved the diagnostic kit within a few days, so we could diagnose more than 3,000 patients a day,” she said, adding that differences in the two countries’ health care systems could also prevent Americans from receiving fast and affordable treatment.

“In Korea, our national health insurance system is good, so we go to the hospital without any hesitation, anytime.”

“In Korea, our national health insurance system is good, so we go to the hospital without any hesitation, anytime,” she said.

Kim also suggests that Americans should consider wearing respiratory masks when they are sick, as many South Koreans do. This decreases the potential that an infected person could transmit disease through their mouth or nose, especially in crowded places.

Kim said an added social grace that comes with wearing a mask in public is that “it shows how thoughtful and considerate you are about others.”

The worst of South Korea’s coronavirus outbreak might not yet be over.

As of Tuesday evening, thousands remain in quarantine after showing symptoms or coming into contact with a confirmed COVID-19 patient. It could take at least two weeks for the virus to incubate, experts say. 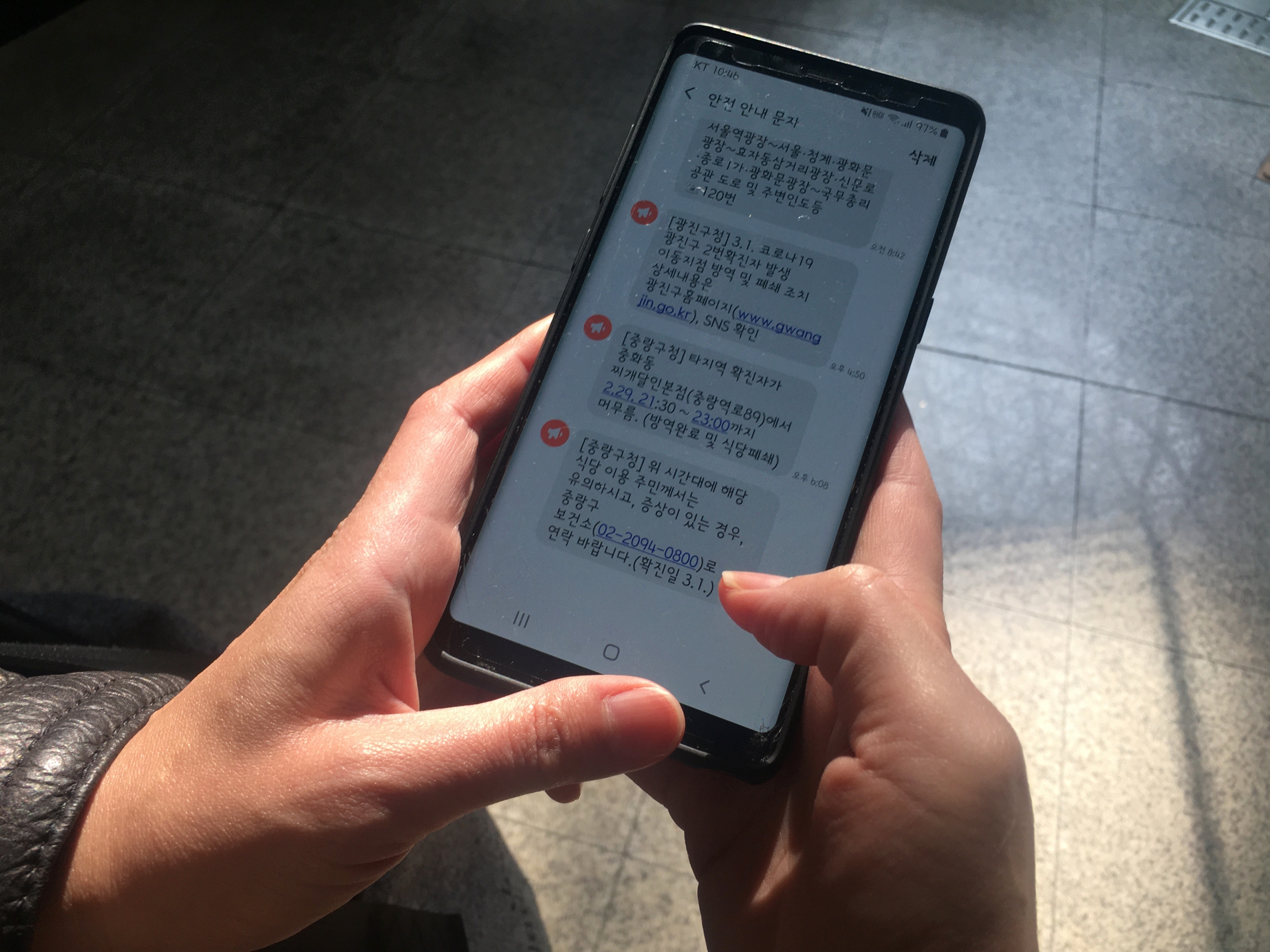 Text message alerts warn South Koreans that a new coronavirus infection has been reported nearby.

Vice Health Minister Kim Gang-lip said during a Tuesday press conference that the government will open more isolation chambers for confirmed patients in Daegu and asked locals to increase their “social distancing.”

Throughout the country, companies ask staff to work from home, and schools and universities have extended winter vacations while countless events, including concerts and sporting matches, have been canceled.

In Seoul, public gatherings and protests, which are a daily occurrence in the capital, are now banned. And the city has asked prosecutors to charge the leadership of a religious group with murder and other crimes for allegedly refusing to cooperate with KCDC officials.

Authorities believe the current surge in infections originated at a Daegu branch of the Shincheonji Church of Jesus, which is widely seen as a cult.

“It’s a great calamity,” Lee Man-hee, the 88-year-old sect leader said during a tearful speech on Monday in which he begged for forgiveness on his hands and knees. 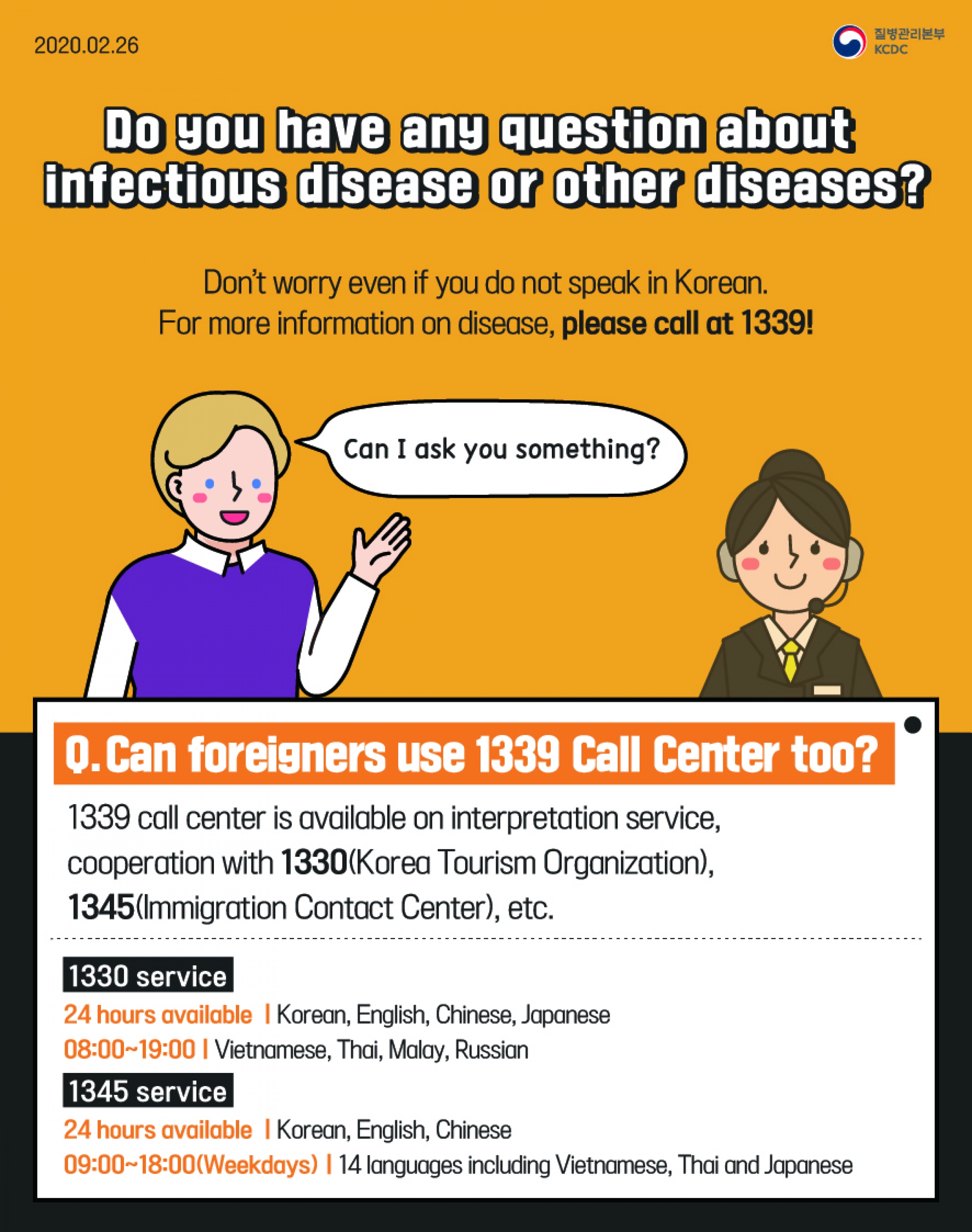 The Korea Centers For Disease Control operates a coronavirus hotline in multiple languages.

Courtesy of the Korea Centers For Disease Control

The Korean National Police Agency is cracking down on price-gouging and mask-hoarding, and the central government is stepping in to safeguard supplies and stabilize costs.

Kim So-young waited in line for almost an hour last Friday to purchase a five-pack of masks during a sale sponsored via a publicly owned business cooperative.

“I couldn’t find masks anywhere else until I came here. I was wrapping my scarf around my face as a substitute.”

“I couldn’t find masks anywhere else until I came here,” said the 50-year-old homemaker, who paid just under $5 for the subsidized medical supplies. “I was wrapping my scarf around my face as a substitute.”

There’s also a concern that medical supplies are not reaching those who are most vulnerable to a viral infection — the elderly, those with preexisting conditions and people with disabilities.

Gwan Sun-goo is a rehabilitation specialist at Youngnak Aenea’s Home, a full-time care facility in Seoul, where 30 people with cognitive impairments reside.

“While I appreciate the government’s openness during this outbreak, I think they’ve been a little slow to deliver resources to our center,” he said, adding that it was only last Friday that the home received a shipment of 300 face masks and 10 liters of hand sanitizer.

Speaking through a cracked-open, sliding glass door, Gwan said, “a disease could spread easily here because we are all living closely together; none of the patients can walk on their own, and many have tuberculosis.”

He says to prevent spreading the coronavirus to the home's residents, the staff has decided not to leave the center until the epidemic is over.