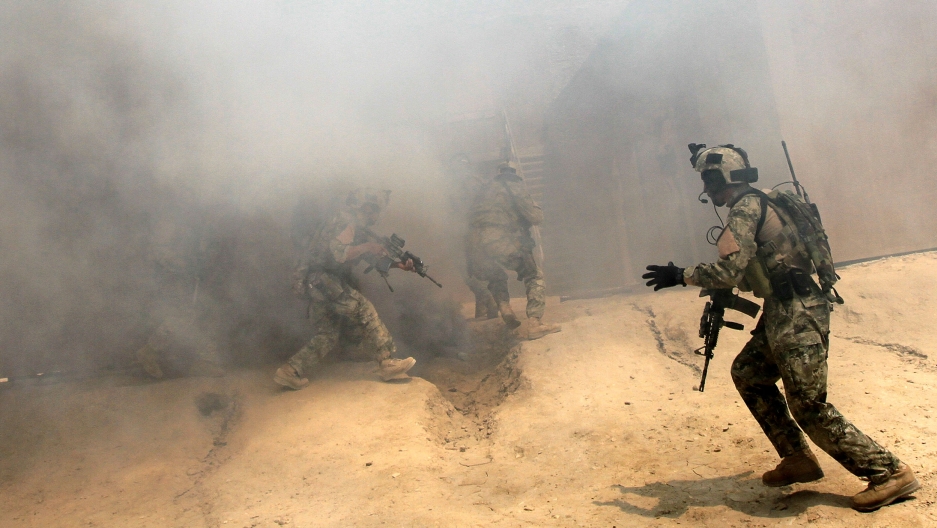 Afghan Special Forces participate in a night raid training exercise in Kabul in 2012. Editor's note: The forces pictured here are not those accused in the report.

Afghan security units backed by the US Central Intelligence Agency have carried out extrajudicial executions, enforced disappearances, indiscriminate airstrikes and other rights abuses and should be disbanded, a rights group said on Thursday.

"They are illustrative of a larger pattern of serious laws-of-war violations — some amounting to war crimes — that extends to all provinces in Afghanistan where these paramilitary forces operate with impunity," the group said in a report.

Related: Baghdadi’s death is a huge blow to ISIS, but history suggests it won’t guarantee a safer world

A CIA spokesman said the agency conducts its operations "in accordance with law and under a robust system of oversight."

"The Taliban does not operate with any similar rules and — even worse — conducts an extensive propaganda campaign to discredit those who support the legitimate Afghanistan government," said CIA spokesman, Timothy Barrett.

The Afghan government declined to comment until after publication of the report, but a military official acknowledged that the Afghan special units at times make mistakes.

"Because they carry out the most complicated operations, but we are not assassins and there is oversight and accountability," said the official, who declined to be identified.

The CIA-backed paramilitary forces are notorious in Afghanistan, often drawing complaints from villagers and district authorities for their brutal raids, often under the cover of night.

But the rights group said the Afghan government lacked the capacity and the political will to investigate incidents involving the forces. The group cited a diplomat referring to them as "death squads."

While Afghan paramilitary forces nominally belong to the main National Directorate of Security (NDS) intelligence service, the CIA-backed forces do not fall under the agency's normal chain of command, nor those of the Afghan or US militaries.

"They largely have been recruited, trained, equipped, and overseen by the CIA," Human Rights Watch said.

"They often have US special forces personnel deployed alongside them during kill-or-capture operations; these US forces, primarily Army Rangers, have been seconded to the CIA."

Patricia Gossman, the author of the report, spoke to The World's Carol Hills about her investigation and findings.

"It's important to understand that the CIA has been running essentially a parallel counterinsurgency operation in Afghanistan since 2001," Gossman explained. "And in that, they have enabled, armed, trained, supplied, worked with these paramilitary forces initially to hunt al-Qaeda. But what we've seen in the last, especially two years ... is of expansion of that. And there's now several new units that are designed to go after Islamic State groups and increasingly, the Taliban."

And the kinds of things you found evidence of are?

Essentially, these are night raids. They go to villages — mostly this happens in rural areas of Afghanistan — come in the middle of the night, usually between midnight and 3 a.m., and summarily shoot people and detain some of them without informing the family where they're being held, which is an enforced disappearance.

Give us an example because that's pretty dramatic.

The first case I came across was out in Nangarhar Province, which is to the east. And it was an old man who came to talk to me about this incident that happened in this village when these forces arrived by helicopter, were dropped in the village, blew up the gate of his compound, came in, shot two of his brothers, shot a nephew and then detained his son. No explanation. He's been searching for his son ever since. The other incidents that we've included in the report are attacks on medical care, basically clinics that are accused of treating Taliban fighters and are subjected to attacks. Medical staff have been beaten and in some cases, killed. Even if they were fighters in some cases, you cannot shoot a prisoner in custody. They can take them, they can detain them, they can question them. You can't just shoot somebody in your custody. That's a war crime.

"You can't just shoot somebody in your custody. That's a war crime."

I guess one thing I want to clarify: Is it the CIA who is directing these Afghan military who are operating under them on what operations to undertake or are these CIA-trained Afghan soldiers making those decisions themselves?

I think that's a very good question, and the problem is there's not enough transparency about these operations to know. What we'd like to see is more accountability so that that question becomes clear, particularly those people who are affected by these night raids.

Now, the CIA says it takes these allegations seriously and they're going to thoroughly review what you've written. But in a statement, the agency says your claims are likely false or exaggerated. They point to past reviews of similar allegations, and they kind of suggest you've been played by the Taliban propaganda machine.

Well, yeah. They say they've investigated these in the past. We've seen no evidence that they've ever held anyone accountable and some of these incidents have been investigated by other groups other than ourselves, including media. And, you know, they have also corroborated these accounts. Some of these clinics, you know, the clinic staff, they're run by international nongovernmental organizations, and they know that these raids have happened to their staff, have been beaten up or in some cases, killed, and these are international NGOs who vouch for their own staff and yet, even in those cases, no investigations have taken place.

The CIA statement that I mentioned also affirms the US commitment to the rule of law and says it doesn't condone or knowingly participate in illegal activities. What do you want the US to do in response to your report?

Well, we know that some groups, including the UN and the Afghan Independent Human Rights Commission, have been trying to investigate these incidents to get to the bottom, to give some redress to the victims. We would like the US to cooperate with these investigations so that the truth comes out. They say they want to hold their forces accountable and abide by the rule of law. This is the way they can do it.