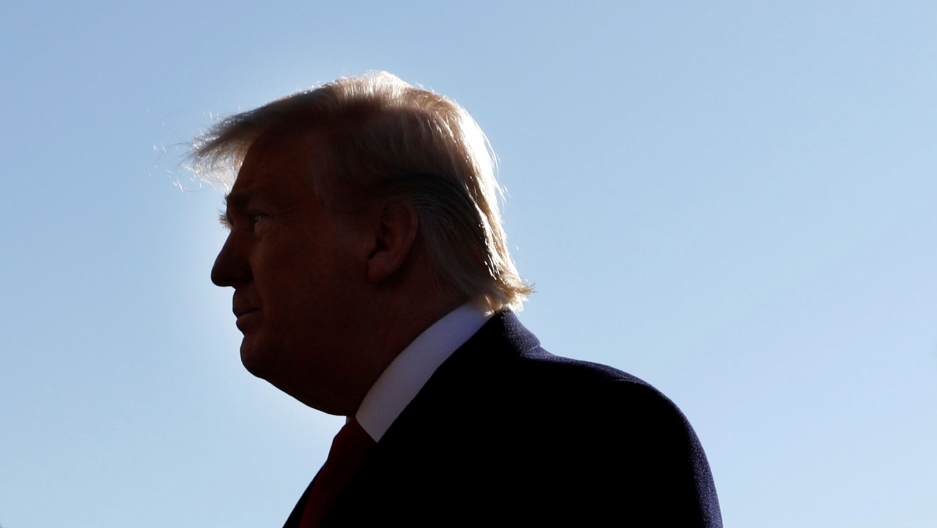 US President Donald Trump speaks to the media on the South Lawn of the White House in Washington, DC, Feb. 23, 2020.

“Drain the swamp” was Donald Trump’s rallying cry during his 2016 presidential bid.

Trump's campaign promise to purge Washington of its "rigged system" was part of what propelled him to the presidency — not unlike the anti-corruption platform that bolstered Ukrainian President Volodymyr Zelenskiy in his own campaign for office last spring.

But while Ukraine has been making efforts to amend structural corruption for years, Trump seems to be doing the opposite. Several of his recent actions have weakened faith in the US rule of law.

In the weeks following Trump's acquittal in the Senate impeachment trial — a trial in which the president's defense focused on alleged corruption in Ukraine — the president has inserted himself into matters of the US Justice Department, breaking norms that have long kept the executive branch from exercising its political power in matters of justice. Trump has attacked judges, interfered in the court case of his associate Roger Stone, and granted clemency to white-collar criminals serving time on corruption or corruption-related charges. 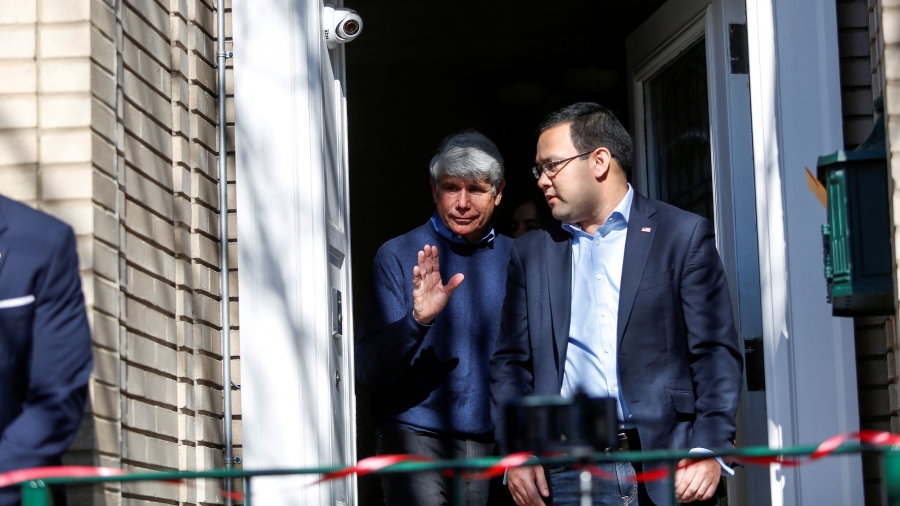 Rod Blagojevich, the ex-Illinois governor convicted of trying to peddle Barack Obama's vacated US Senate seat, waves as he exits his home before speaking to reporters after US President Donald Trump commuted his prison sentence, in Chicago, Illinois, Feb. 19, 2020.

The president's pardons are “essentially a jailbreak for a ‘who's who’ of American corruption,” said constitutional scholar Richard Primus at the University of Michigan.

And while the president, constitutionally speaking, does have broad authority over the Justice Department, American laws and norms have limited the influence of the president over the courts.

“It's dangerous to have the president directly involved in specific decisions about specific people,” Primus said, adding that informal norms, particularly since Watergate, have largely prevented presidents from exercising their authority in corrupt ways. “It was a very good thing. And it's dangerous and scary for it to unravel.”

And repercussions extend beyond US borders. The distinct pattern of taking the sting out of consequences for corrupt behavior — especially for political allies and white-collar criminals — plays directly into Russia's hand, Primus said.

US intelligence agencies recently told House lawmakers that Russia, under the presidency of Vladimir Putin, is actively working to interfere in the US 2020 presidential race and Democratic primaries. Putin has long indicated a preference for Trump as leader of the US. Democratic senators have called for sanctions against Russia, including Putin, in response.

“Since World War II, American leadership in the world has been significantly based on a system that stands not just for power, but for a set of ideals, including the rule of law,” Primus said. “Putin wants to destroy that because it was the thing that gave the United States the advantage over Russia in present world affairs.”

The institutional norms that have eroded under the Trump presidency are weakening US democracy, Primus said. “It's actually a big part of Vladimir Putin's great success with the Trump administration.”

Trump's pattern of behavior toward the Justice Department also mirrors what the president claims to have been fighting in Ukraine: political interference in corruption cases.

“Why would you give money to a country that you think is corrupt?” Trump asked reporters on Sept. 23, 2019, just a day before House Speaker Nancy Pelosi announced the impeachment inquiry into the president's actions to withhold security aid to Ukraine in exchange for an investigation into his political rival, former Vice President Joe Biden.

“That argument as applied to the impeachment was always a lie, and obviously a lie. The president doesn't care about corruption at all.”

“That argument as applied to the impeachment was always a lie, and obviously a lie,” Primus said. “The president doesn't care about corruption at all.”

A prescient question for the president now might be why he is granting clemency to men convicted and jailed on corruption charges. Therein lies the president's hypocrisy.

Monica Eppinger, an expert in Ukrainian politics and justice at St. Louis University, called Trump's involvement in Ukraine “an exercise in projection on the part of the president: He seems to be seeing in Ukraine what he actually is trying to exercise now in the United States.”

Ukrainians have for decades been fighting against corruption in top echelons of leadership. Disgraced President Viktor Yanukovych was so deeply corrupted he was convicted of treason after being ousted during the 2014 Revolution of Dignity, also known as Euromaidan. 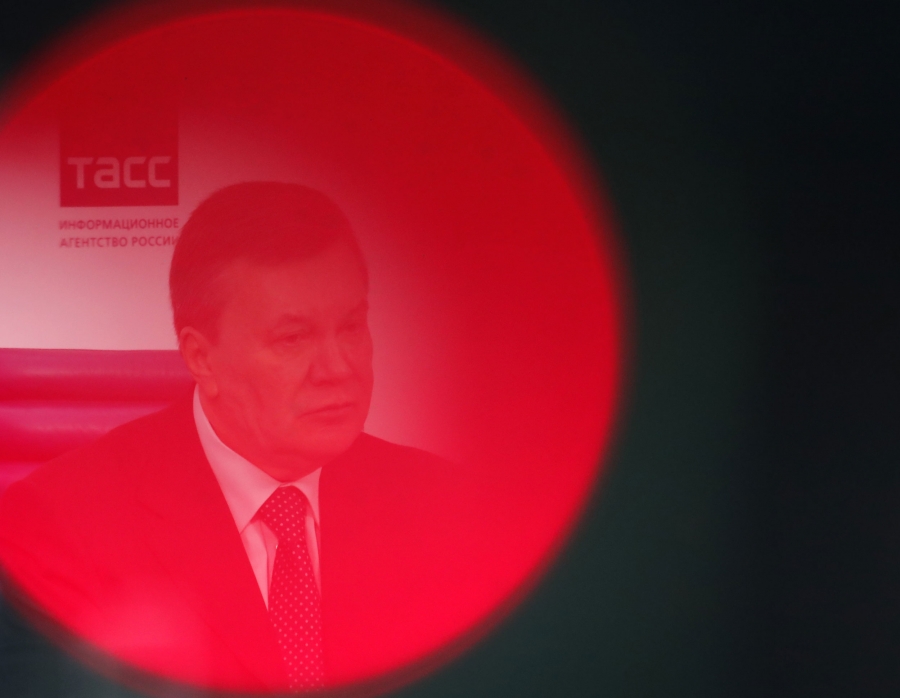 Former Ukrainian President Viktor Yanukovych is seen through a light on a television camera as he attends a news conference in Moscow, Russia March 2, 2018.

Indeed, Trump's spate of post-impeachment efforts to exert political influence on justice matters comes as Ukrainians commemorate the six-year anniversary of that revolution and Russia's invasion of Ukraine — the very reason Ukrainians needed the delayed security aid at heart of the impeachment inquiry.

“What is being commemorated ... is a revolution that had only three real consolidated goals. And one of the goals was anti-corruption, that's what brought people onto the street,” Eppinger said.

Among the revolution’s most concrete results is the development of institutions to prevent, investigate and prosecute corruption, though, “We all know that there is a difference between institutions and actually getting results in reducing corruption.” Still, Eppinger said, "Credit belongs primarily to the people of Ukraine for trying to watchdog their government.”

The US has long served as a model for post-Soviet rule of law reforms, making the president's actions even more concerning in the context of Ukraine.

“The United States was one of the chief examples that [Ukrainians] were looking at to see how we structured separation of powers,” Eppinger said in an earlier interview with The World. “Separation of powers had not been one of the goals and virtues of the Soviet system, and they were very keen to try it out.”

Now, the American institution of checks and balances itself appears to be faltering.

“The Senate was supposed to be a check in the impeachment process, and it failed,” Primus said. “There are very few checks left, and the president seems to know it.”

Despite several Republican senators informally admonishing his behavior regarding Ukraine, post-impeachment, Trump appears to have taken his acquittal in the Senate impeachment trial as carte blanche to reward his allies and punish his enemies — very much like the system Ukrainians have worked to take down.

“Prosecutions could be politically motivated,” Eppinger said of Ukraine's challenges with systemic corruption. “If you were the political opponent of the wrong person, you could be investigated for crimes. Or the other way, cronyism could help you ... if you were the friend of the right person, then you could get away with things and not be prosecuted.”

And that kind of political corruption has trickle-down consequences.

“It wasn't always that orders were given from the executive branch to, let's say, the judicial branch. But rather, people could read the tea leaves. So, a judge might be more lenient on someone that they knew was a friend or an associate of someone in power without ever having to be told to be more lenient,” she added. 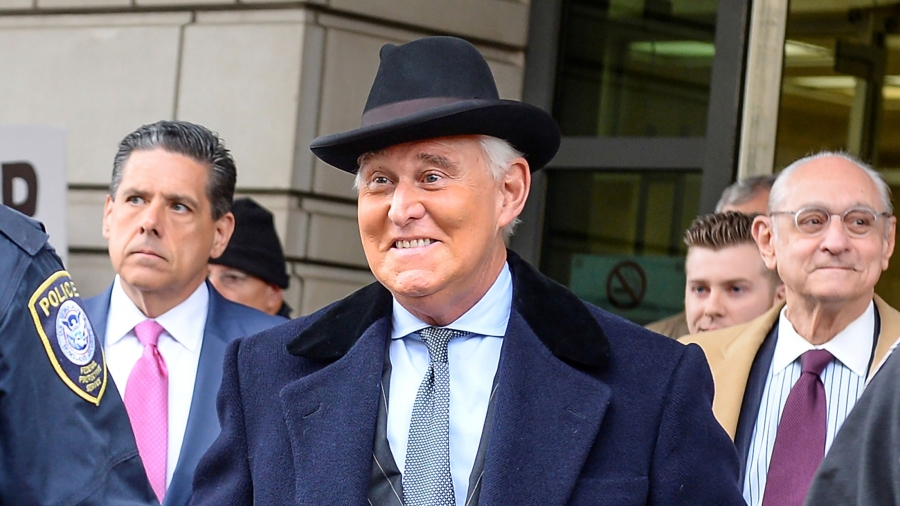 Former Trump campaign adviser Roger Stone departs after he was sentenced to three years and four months in prison for charges that include lying to Congress, obstruction of justice and witness tampering, at US. District Court in Washington, DC, Feb. 20, 2020.

It draws striking similarities to sentencing in the case of the president's longtime friend and convicted felon, Roger Stone. While Attorney General William Barr said the president “never asked me to do anything in a criminal case,” a reduction in the recommended sentence for Stone came after Trump tweeted his outrage at the initial offering. Barr has reportedly contemplated resigning — both he and the president agree that Trump's interference is making Barr's job in the Justice Department difficult.

The president's recent pardons and commutations, which included former Illinois Gov. Rod Blagojevich, did not appear to go through the institutionalized vetting protocol set by the Department of Justice. Rather, they were “recommendations” from Trump associates and other nongovernmental entities — including Rudy Giuliani, the president's personal lawyer who was implicated in the impeachment scandal. They are also pardons for crimes that parallel the president's own actions.

“If we are surprised by some of these pardons, that surprise will wear off by the time more pardons are given by Trump — and that is the point,” argued Stephanie Sarkis, an expert on gaslighting.

And post-impeachment, Trump has also targeted political opponents — not for the first time.

“The idea that a president would, on his own initiative, direct the criminal investigation or prosecution of a political opponent is ‘banana republic’ type of stuff. It's not supposed to happen in this system.”

“That was shocking,” Primus said, recalling the 2016 presidential debate in which Trump told then-candidate Hillary Clinton he would get a special prosecutor to investigate her. “The idea that a president would, on his own initiative, direct the criminal investigation or prosecution of a political opponent is ‘banana republic’ type of stuff. It's not supposed to happen in this system.”

The president has pushed career civil servants out of their positions, including Lt. Col. Alexander Vindman, who testified in the House inquiry, and top defense official John Rood, who certified to Congress last May that Ukraine had made the reforms needed in order to release security aid — directly contradicting the president that aid had been withheld over corruption concerns. 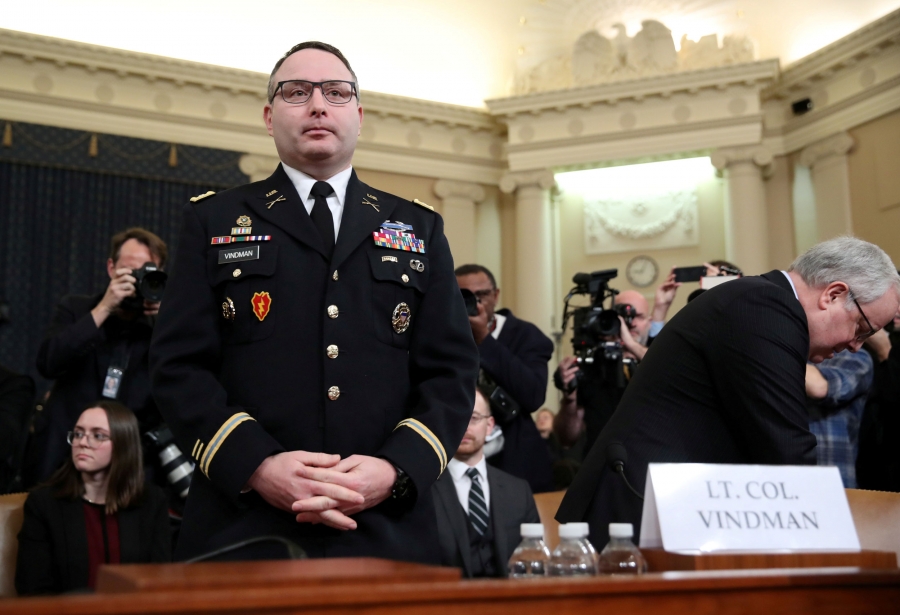 Lt. Colonel Alexander Vindman, director for European Affairs at the National Security Council, arrives to testify before a House Intelligence Committee hearing as part of the impeachment inquiry into US President Donald Trump on Capitol Hill in Washington, DC, Nov. 19, 2019.

“Americans have never lived in a society completely free of corruption, but measured by the standards of world history, we have mostly lived in a world where the national government law enforcement apparatus isn't used to persecute the president's personal enemies, and reward the president's personal friends. That's a disintegration of the rule of law,” Primus said. “If the president is doing it aggressively, and obviously, it makes federal law enforcement not a tool of law, but just a tool of corrupt power. And that's a disaster.”

Disastrous for the US internally — but also on the world stage.

“It makes it incomparably more difficult for us, for the United States to have anything practical and useful, influential to say in an anti-corruption conversation because of the hypocrisy at the top of the US executive branch. It smears all of us,” said Eppinger, who also served as a tenured US Foreign Service Officer.

For Ukrainians, Eppinger said, seeing the American president blatantly interfere in justice matters is both shocking and unsurprising.

It hobbles the US projection of principled power.

“The more Trump does what Trump does, the more the idea that American leadership is based on a set of ideals — and not just about power in service of a set of corrupt people looking out for themselves — dissolves,” Primus said. “And that weakens us tremendously in exactly the way that Putin hoped it would.”