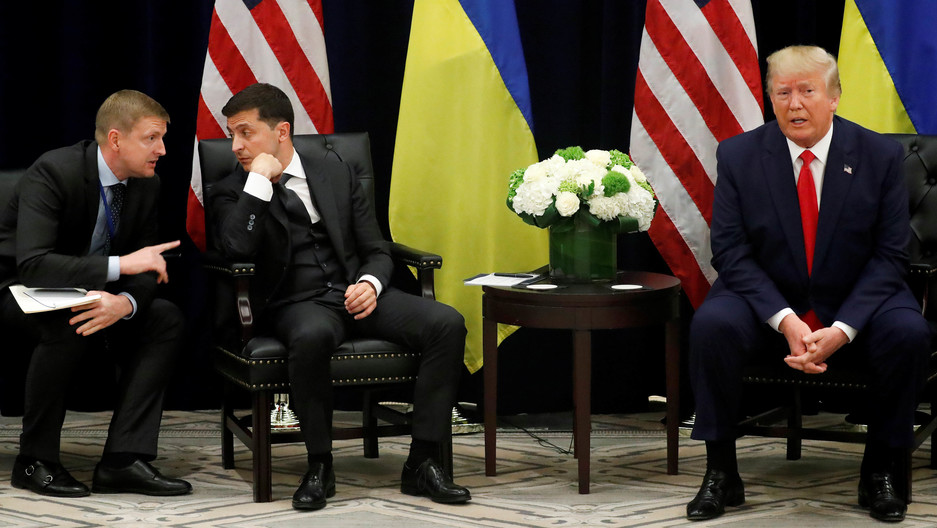 Ukraine's President Volodymyr Zelenskiy listens to a translator as he and US President Donald Trump hold a bilateral meeting on the sidelines of the 74th session of the United Nations General Assembly in New York City, Sept. 25, 2019.

Many Ukrainians are reacting with a shrug to the drama playing out in Washington, DC, after House Democrats launched an impeachment inquiry into US President Donald Trump. A phone call, in which Trump asks Ukrainian President Volodymyr Zelenskiy to "do us a favor" is at the center of a whistleblower complaint that sparked the inquiry.

Related: Could President Trump be impeached and convicted — but also reelected?

Ukrainians are accustomed to powerful forces meddling in their judicial system, says Anne Applebaum, a Pulitzer Prize-winning historian and expert on central and Eastern Europe.

“The oddity from Kyiv’s point of view is that this is so much like a Ukrainian- or Russian-style scandal," she said.

Am getting tired of hearing about how "corrupt" Ukraine is. You know which country is corrupt? The United States. We have a president who is using the White House to make money, presidential children who are using their father's prestige to make money.

But even as they find corruption foisted on them by their most important ally in Washington, DC, Ukrainians have remained determined to root out unethical practices in their own country, Applebaum told The World's host, Marco Werman.

"The idea of a person in power pressuring foreign colleagues to manipulate the judicial system, to put pressure on prosecutors, to create fake evidence in a case that everybody knows is false and conduct a fake investigation — this is exactly what Ukrainians, in particular, have been trying to get out of their political system for 20 years," Applebaum said. "The political abuse of justice is a central issue in contemporary Ukrainian politics and in some ways, has been the cause of both the Orange Revolution in 2004 and the Maidan Revolution in 2014."

Marco Werman: Are there some Ukrainians locked in the old-school way of doing things that are kind of ho-hum about this whole thing?

Anne Applebaum: Oh, of course. I mean, there are people who would like to keep the corrupt system in place and the drama of Ukrainian politics for the last several years would be: Would the previous President [Petro] Poroshenko change the system? Would he allow real investigations of corruption or would he keep these politicized prosecutors in place? And one of the reasons he lost the election is that he was never quite able to make that change. President Zelenskiy has won promising to make those changes, so this is very central to Ukrainian politics.

You're a historian — give us the wide-angle view here, so, we can try to understand Ukrainians efforts to fight corruption. The country won its independence in 1991. It's had two revolutions since then — in 2004 and then the uprising in 2014 that forced out President Viktor Yanukovich, who was kind of a poster child for corruption. Have Ukrainians been able to build anything like an independent judiciary since then?

First of all, it's important to say that Ukraine has been very good at mobilizing civil society, whether it's organizing protests or creating nongovernmental organizations or creating anti-corruption pressure groups or even creating universities that produced a new generation of lawyers and young legal experts who are willing and ready and prepared to take over the judicial system. What has been lacking up until now has been a political conviction that this is what we need — that we need neutral justice, that we need prosecutors who will not carry out politicized investigations. You know, the country is really ready for this change, and I think there are people around who would be willing to make it and capable of making it. So, it's not like the country is incompetent. I mean, actually, it's increasingly less corrupt. There has been a lot of progress politically on procurement issues, but the big change, namely, creating an independent prosecutor's office, is still awaiting us. This scandal with Trump is a huge step backwards because now, one of Ukraine's most important interlocutors and one of the countries that Ukraine most looks up to, actually, as a moral and political model, has shown that it, too, would like to keep Ukraine corrupt.

A lot of American entrepreneurs have made a lot of money in Ukraine, as you know. In 2014, Hunter Biden joined the board of Burisma, the largest natural gas producer in Ukraine. It was run by an oligarch who had some issues with the law. There are no indications that Hunter Biden did anything illegal, but he had no prior experience in the gas industry. Why would he be an attractive candidate for a board position?

Ukraine here is no way an exception. I mean, the idea of putting a prominent person or prominent person's child on your board as a way of gaining some kind of political credibility for a big company is extremely common. Another example would be the fraud company, Theranos, the Silicon Valley company that pretended it had new ways of taking and measuring blood samples. It put Jim Mattis on its board. Why was Jim Mattis on its board? He knew nothing about blood or chemistry or anything related to that, but the company put him on his board in order to gain some kind of credibility, and that's what this Ukrainian company did, as well. It's ugly. It happens in every country. It's not illegal, and there's no evidence that it was corrupt.

There are a lot of Ukrainians who want to leave this corrupt era in the past. Is there a recognized anti-corruption movement in Ukraine? Are advocates highly visible?

Yes. Anti-corruption advocates are highly visible. In fact, the 2014 protests that you may remember — we all saw them on television. There were people standing in the central square of Ukraine all through the winter during the snow. Rock musicians came and performed there. That was, in its essence, an anti-corruption protest. So, yes, anti-corruption is a major subject. It was the main topic of the last presidential election. It was the platform that President Zelenskiy ran on. It is probably the central and most important issue in Ukrainian politics, and it's discussed all the time.

Finally, Anne, what do you think this crossroads means for Ukraine moving forward, and how confident are you in President Zelenskiy to lead with the shadow and influence of Trump hanging over him?

It doesn't really affect his day-to-day operation. It would be my hope — and I think a lot of people in Ukraine hope — that he'll be able to simply move on. He's taken some steps in a direction that people like. He's appointed good people with an independent reputation, both in the justice system, but also in other parts of the government. And people want him to go on developing and deepening Ukraine's sovereignty and an uncorrupt, neutral state system. And that he's going to have to do without the help of the United States. 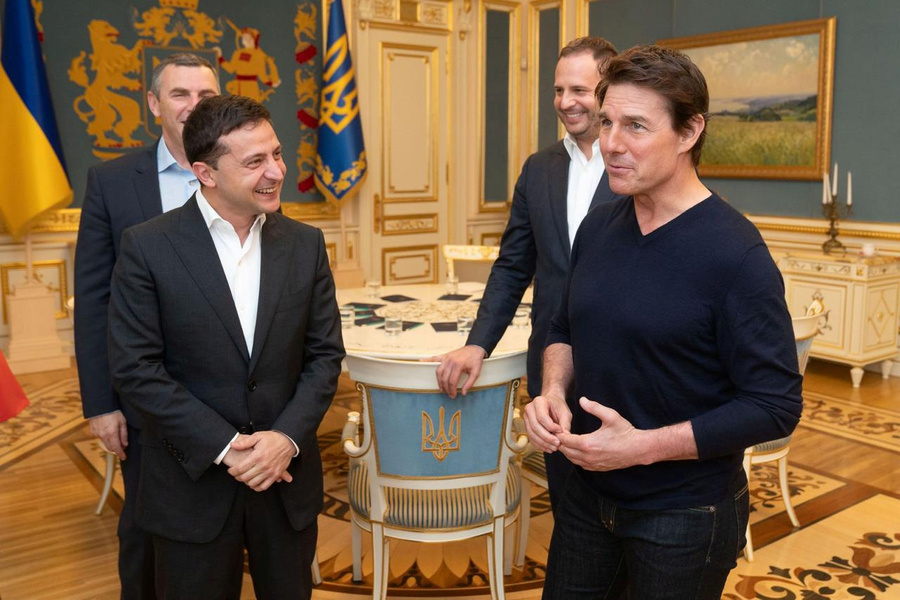 He did seem more starstruck by Tom Cruise than by sitting next to President Trump.

Every world leader now knows that a photo call with President Trump is a potential disaster. You know you have to sit there, you have to keep a blank face. You can't react when crazy things are said. And we saw the president of Finland in the last couple of days facing the same dilemma. And this is now — this is not a Ukrainian problem, this is an international problem.