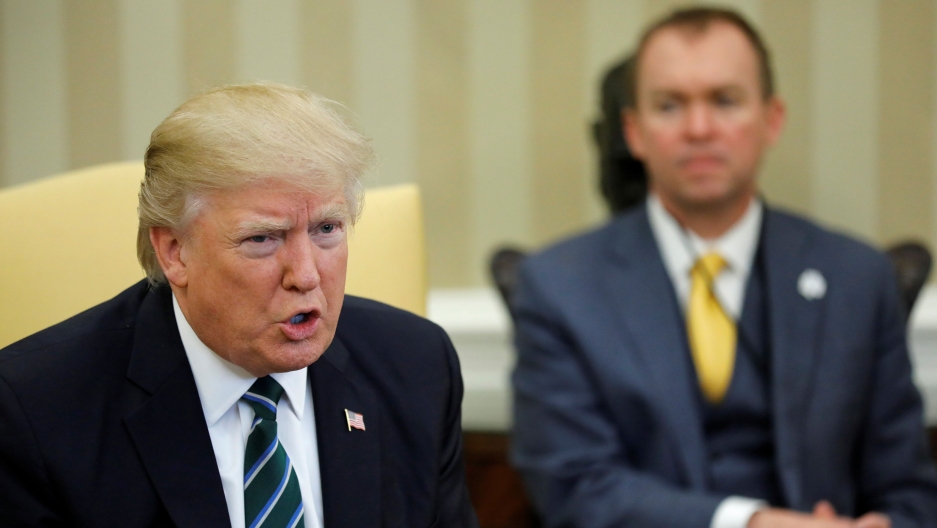 At the heart of the impeachment inquiry into US President Donald Trump is the decision to withhold security aid from Ukraine.

The first article of impeachment voted on by the House of Representatives on Dec. 18 charges the president with abuse of the powers of his office by pressuring Ukraine to launch an investigation that would benefit him in his reelection campaign.

Part of that alleged pressure is tied to “the release of $391 million of United States taxpayer funds that Congress had appropriated on a bipartisan basis for the purpose of providing vital military and security assistance to Ukraine to oppose Russian aggression and which President Trump had ordered suspended,” according to the articles.

A Government Accountability Office report released Thursday says the Trump administration violated the law when it withheld aid intended for Ukraine in the summer of 2019. The GAO is a nonpartisan watchdog agency that reports to Congress.

Released just a day after the House sent articles of impeachment to the Senate for trial, Democrats have pointed to the report as an indication of the need for additional evidence and testimony to be included in the Senate proceedings. This has been a point of contention in the weeks leading up to the trial.

“This reinforces again the need for documents and eyewitnesses in the Senate,” House Speaker Nancy Pelosi said at a Thursday press conference, adding that the administration is engaged in a “tangled web” of deceit.

Related: Trial in the Senate: Where does impeachment go from here?

On June 18, 2019, the Department of Defense announced $250 million in security assistance to Ukraine. These funds extended congressional appropriations for the Ukraine Security Assistance Initiative as part of the John S. McCain National Defense Authorization Act for fiscal year 2019.

Ukraine is currently engaged in a hot war with Russia in the eastern region. More than 13,000 people have died in the conflict. The funds provided by Congress through the USAI were intended to “provide assistance, including training; equipment; lethal assistance; logistics support, supplies and services; sustainment; and intelligence support to the military and national security forces of Ukraine.”

According to the GAO report, in the summer 2019, the Office of Management and Budget withheld around $214 million that had been appropriated to the Department of Defense to be disbursed to Ukraine under the USAI. More than $140 million in funds appropriated to the State Department was also delayed. OMB is an agency within the Executive Office that serves the president. It is headed by Mick Mulvaney.

The Trump administration has argued that funds were withheld in order to investigate corruption in Ukraine. But before releasing the aid, DOD was required to certify that Ukraine met certain “defense institutional reforms.” That certification was made to Congress on May 23, 2019.

Indeed, the June 18 DOD announcement notes, “This security cooperation is made possible by Ukraine’s continued progress on the adoption of key defense institutional reforms to align Ukraine’s national security architecture with Euro-Atlantic principles.”

Testimony from the House impeachment inquiry indicates that a hold on aid may have been placed as early as July 3. But on July 25 — less than two hours after the infamous Trump call with Ukraine's President Volodymyr Zelenskiy — OMB officially issued the first of nine holds on the aid in a footnote of OMB funding documents. The hold prompted some OMB officials to voice concerns and two to resign.

According to the footnote, the aid was paused on July 25 “to allow for an interagency process to determine the best use of such funds,” but would not prevent the “timely execution of the final policy direction.”

Trump agreed to a release of the aid Sept. 11, just weeks before the end of the fiscal year on Sept. 30. A Sept. 12 apportionment was issued without the footnotes blocking the aid.

But according to the US Constitution, the president does not have unilateral power to withhold congressionally appropriated funds. Exceptions are limited and described in the Impoundment Control Act — a 1974 law that addresses Congress' concern that a president may fail to carry out their duty to Congress in order to prioritize their own policies. The reason for the ICA is partially to ensure that “the practice of reserving funds does not become a vehicle for furthering Administration policies and priorities at the expense of those decided by Congress,” according to a Congressional committee report.

Withholding funds, according to the ICA, can only be done by deferral or by seeking a rescission — that is, a permanent cancellation of the funds. In either case, it “requires that the President transmit a special message to Congress,” a proposal in which the executive branch must provide detailed and specific justification to defer or cancel funds. No such special message appears to have been transmitted to Congress in the case of the DOD aid for Ukraine.

According to the GAO report, OMB described the hold on aid “as necessary to ensure that the funds were not spent 'in a manner that could conflict with the President's foreign policy.'” But the ICA doesn't allow funds to be deferred for policy reasons. “Thus, the deferral of USAI funds was improper under the ICA,” the GOA report states.

The OMB further argues that funds were withheld as part of a “programmatic delay,” but the GAO report found that the “OMB's assertions have no basis in law.” In fact, the report asserts “at the time OMB issued the first apportionment footnote withholding the USAI funds, DOD had already produced a plan for expending the funds,” and had already sent Congress information on the items it planned to purchase with the funds May 23.

The OMB was quick to respond to the report. “OMB uses its apportionment authority to ensure taxpayer dollars are properly spent consistent with the President’s priorities and with the law,” said Rachel Semmel, a spokeswoman for the agency.

The GAO report concludes that the “OMB violated the ICA when it withheld DOD's USAI funds from obligation for policy reasons.”

But despite the GAO's assertion that the Trump administration violated the law, officials will not likely be prosecuted, as there are no criminal penalties associated with the ICA.

“We consider a reluctance to provide a fulsome response to have constitutional significance,” reads the conclusion of the report, signed by Thomas H. Armstrong, the GAO's general counsel. “All federal officials and employees take an oath to uphold and protect the Constitution and its core tenets, including the congressional power of the purse.”