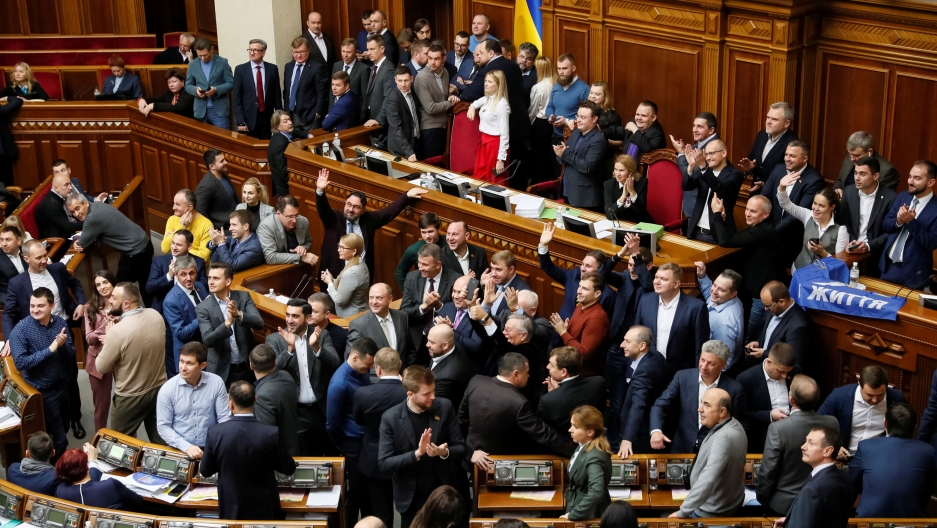 Ukrainian lawmakers react during a discussion of the law to remove a ban on the sale of farmland, at the parliament building in Kyiv, Ukraine, Nov. 13, 2019.

The Democratic-led US House of Representatives will vote on Wednesday to send formal impeachment charges against President Donald Trump to the Senate, lawmakers said on Tuesday, likely setting the start of Trump's trial for later this week.

Trump became only the third US president to be impeached when the House last month approved charges that he abused his power by pressuring Ukraine to announce an investigation into his Democratic rival Joe Biden and obstructed Congress.

Trump has denied any wrongdoing and has dismissed his impeachment as a partisan bid to undo his 2016 election win as he tries to win reelection in November.

The case against Trump is focused on a July 25 telephone call in which he asked Ukrainian President Volodymyr Zelenskiy to open a corruption investigation into former Vice President Biden and his son Hunter, and into a discredited theory that Ukraine, not Russia, meddled in the 2016 US election.

Joe Biden, whose son served on the board of a Ukrainian gas company, is a leading Democratic candidate for the presidential nomination to face Trump in the Nov. 3 election.

Republicans presume Biden would have been damaged politically by a Ukrainian probe into him and his son, but Trump and his allies have offered no evidence that they were involved in corruption in Ukraine.

A US cybersecurity firm said on Monday that Russian military hackers tried to steal emails from the Ukrainian energy firm Bursima where Hunter Biden was on the board.

Ukraine has been on the minds of many Americans during the impeachment saga, but is the reverse true for Ukrainians?

Marco Werman: How closely is the average Ukranian paying attention to the impeachment hearings?

Svitlana Zalishchuk: This topic is not so popular, not so much discussed, neither amongst politicians nor in press. People don't feel like this topic has a tangible impact on them.

But given kind of how much reliance there is in Ukraine on the United States, is there, perhaps, an unwillingness to talk about impeachment because it might jeopardize the relationship?

I think that this is also one of the factors that have to be taken into account. But at the same time, there are many other problems here in Ukraine. First of all, we still have war with Russia. Many people, many soldiers are fighting in the East. We still have casualties. And I think this is one of the problems that people do care [about]. Another thing is, of course, all of the economic challenges that are there. The gas in Ukraine is really expensive. So people care about economic growth, about the sustainability of the economy, just a possibility for the family to provide. That's the main topics that people are thinking about.

William Taylor recently stepped down as the interim chargé d'affaires in Ukraine at the US Embassy. He served, obviously, as a key witness at the impeachment hearings. There's now a new person in that post, Kristina Kvien. How does the Ukrainian government see this changing leadership at the US Embassy in Kyiv? And what do you think it tells us about US-Ukraine relations generally today?

The most important for Ukraine here is the bipartisan and bicameral support from US to Ukraine. We see that both Democrats and Republicans, when it comes to decision-making, decision-making in Congress, when it comes to security support, these decisions are there. It's also a political signal, a political message that there is cooperation, that there is support. And despite the fact of, let's say, not the most positive context of our relationship, the real cooperation is there.

Related: Yovanovitch testimony shows US foreign policy is 'in shambles'

Did you ever meet Taylor or the former ambassador?

Of course, I knew Masha [Marie] Yovanovitch very well. She was the ambassador here while I was a member of parliament. That new generation that came to the parliament after Euromaidan relied a lot on the support of our international partners from US, from the European Union. We had, if you want, kind of a coalition — those progressives in the parliament and in the government, civil society, journalists, international people that supported progressive reforms in Ukraine. That was enough pressure to put on old elites and on corrupt politicians so that they were not able to ignore these pressures or this public demand — including international demand — for the changes after their Revolution of Dignity. And Masha was a very important person here in Ukraine, playing a very great role in coordinating those efforts amongst the diplomats and helping the new generation, basically, to make sure that reforms are implemented, that they are not stopped, that they are not stalled.

Now, several years after Euromaidan, an even fresher cast of politicians in Ukraine — Volodymyr Zelenskiy at the top is, of course, Ukraine's comedian-turned-president. Some Ukrainians have expressed doubt of not only his ability but his administration's ability to lead. I mean, they are made up of younger, inexperienced politicians. What do you say to that?

I think that the changes that happened, they are really irreversible. What has changed? It was like a civilizational shift — if you want. The values of society changed. It was not the elite who was leading the revolution, it was millions of people in the street that were protesting against not just the authoritarian regime, but against also corruption. And people wanted better, just rules. They chose the European integration, not just as a symbol of something, you know, beautiful and rich Europe, you know, Europe with possibilities. But people chose a different system of governance. And that's why I'm sure that Ukraine is not anymore a swinging country as it used to be referred to. But Ukraine is, if you want, a new Eastern European tiger, you know, with very promising growth — economic growth. It's one of the most dynamic, actually, developing countries in Europe now. I think it will be even more. I think US businessmen, US people, American people, we hear about Ukraine as a new itinerary, and this is what this government is trying to achieve.