Taras Chumut, a military analyst and Ukrainian Marine veteran who volunteered for service in 2014 after the Maidan Revolution, stands in front of a wall of portraits of soldiers who have died in the war in Eastern Ukraine.

St. Michael’s monastery in the heart of Kyiv is impressive — lots of gold, a beautiful bell tower and pristine, onion-shaped domes that glisten whenever the sun manages to shine through the overcast sky.

But in 2014, the 900-year-old monastery took on a new meaning for many Ukrainians. During the upheaval of the Revolution of Dignity, or the Maidan Revolution, it served as a sanctuary, field hospital and morgue for hundreds of people who were shot or beaten by riot police.

From 2015: Police who killed protesters at Ukraine's Maidan are still free 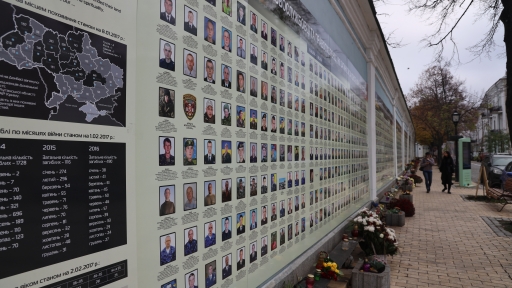 Circumscribing the St. Michael's monastary grounds in Kyiv, Ukraine, is a wall of photos. Each portrait commemorates a Ukrainian soldier killed in the war in Donbas, a war fueled by Russian aggression against Ukraine.

Now, the monastery has taken on yet another role. Circumscribing the monastery’s grounds is a wall of photos, a wall of remembrance. Each portrait commemorates a Ukrainian soldier killed in the war in Donbas, a war fueled by Russian aggression against Ukraine.

Over the last five years, more than 13,000 people have died as a result of the war, according to the United Nations Human Rights Monitoring Mission in Ukraine. That number keeps rising.

“Maybe if the Western world were more active and wouldn’t be scared of decisions that it needs to make, this wall would’ve been much shorter — or it wouldn’t have been here at all,” said Taras Chmut, a Ukrainian marine veteran who volunteered for service in 2014 after the events of the Maidan Revolution, Russia’s illegal annexation of Crimea and Russian aggression in the Donbas region in Eastern Ukraine. “Every day of inaction adds here a photo or two.”

On Dec. 9, the leaders of Ukraine, Russia, France and Germany will meet in Paris for peace negotiations. This will be the first face-to-face meeting between Ukrainian President Volodymyr Zelenskiy and Russian President Vladimir Putin. These peace talks come at a time when US support for Ukraine is unstable — but necessary.

Now a military analyst and head of the Ukrainian Military Center, a nongovernmental organization, Chmut believes that US support is vital for Ukrainian national security and that regardless of domestic US politics, America’s support shouldn’t waver.

But the impeachment inquiry — which alleges US President Donald Trump pressured Ukraine to investigate his political rivals in exchange for aid and a White House meeting — is putting American support for Ukraine into question.

The now infamous phone call between Trump and Zelenskiy, in which Trump asked Zelenskiy to “do us a favor,” has changed the political dynamic between the two nations. Some Ukrainians saw the Trump administration’s temporary freeze on US military aid for Ukraine as a sign that the US can’t be trusted.

Chmut said that later Ukraine’s skepticism toward the US was heightened, in part, by the Trump administration’s November decision to withdraw US forces from northern Syria, leaving Kurdish allies open to attack.

“Because of the events in Syria, some people say what happened to the Kurds may happen to us next, so we shouldn’t count on anyone,” Chmut said. “No matter how reliable your ally is, no matter how much money it has invested in you, one day it may just roll up everything and ditch you,” Chmut said.

While Trump has been inconsistent in his support for Ukraine, established US diplomats have stressed the importance of the US-Ukraine partnership. During their opening statements in the impeachment inquiry hearings, diplomats William Taylor, George Kent, and former Ambassador to Ukraine Marie Yovanovitch all emphasized that the US stands to benefit from supporting Ukraine.

“A secure, democratic, and free Ukraine serves not just the Ukrainian people, but the American people as well,” Yovanovitch said.

The US-Ukraine partnership is also important for keeping Russia in check, the former ambassador said.

“Supporting Ukraine is the right thing to do. It is also the smart thing to do,” Yovanovitch said. “If Russia prevails and Ukraine falls to Russian dominion, we can expect to see other attempts by Russia to expand its territory and influence.”

When the United States helps Ukraine, Samus says, the US is showing “responsibility for supporting Ukrainian needs and dreams for independence.” Ukraine has been independent since 1991, but Samus is referring to full independence from Russian meddling and military aggression. For Samus, the US is a world leader and represents democractic values — supporting Ukraine is about defending American values against Russian aggression. 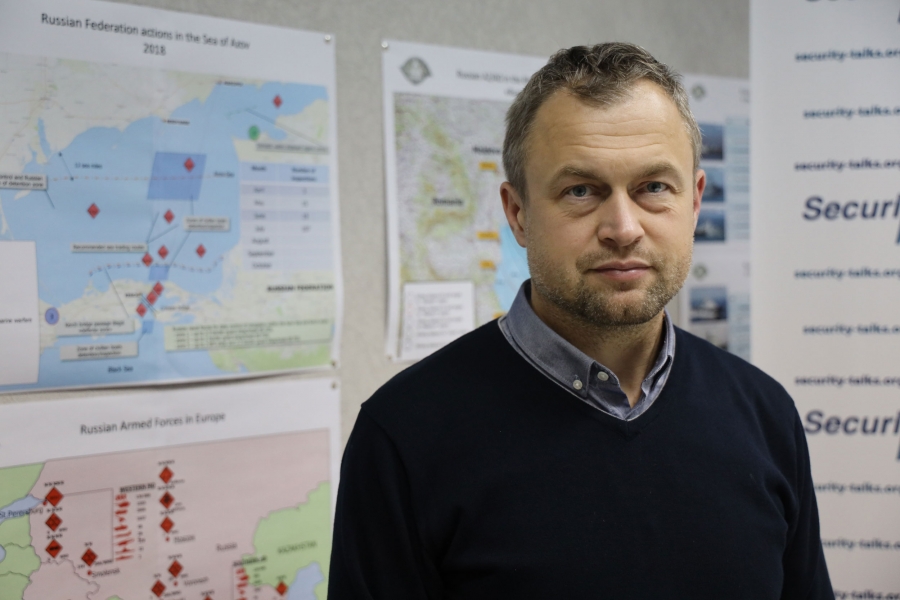 Mykhailo Samus is a Ukrainian military analyst and a veteran. He says the US support for Ukraine against Russian aggression is important for defending democratic values.

Since the start of the war in 2014, the US has given Ukraine more than $1.5 billion in security assistance. During the Barack Obama administration, US funds for Ukraine were restricted to nonlethal aid — lifesaving bulletproof vests, medical supplies, night vision goggles, food rations, armored vehicles, and counter battery radar systems. Once Trump came to office, US assistance included lethal aid, most notably, Javelin anti-tank missiles.

The US also has boots on the ground training Ukrainian forces. One of these training missions is at Yavoriv, or the Joint Multinational Training Group-Ukraine, a base in the Western part of the country outside the city of Lviv near the Polish-Ukrainian border. The stated US mission there is to play a mentorship role, helping Ukraine — which has aspirations of joining NATO — modernize its military.

But even as US forces are working with Ukrainian troops here, talk of the war in the East is limited, and US officials steer clear of direct comments about the war.

“There are many threats from both state and nonstate actors,” said Col. Michael Hanson of the Wisconsin National Guard, which is stationed at Yavoriv. “It’s not just Ukraine, everyone has that same threat.”

For the US, this is a training mission, but for Ukraine, it’s about defending their sovereignty. Ukrainian troops continue to serve on the front line in the Donbas region 500 miles east of Yavoriv. 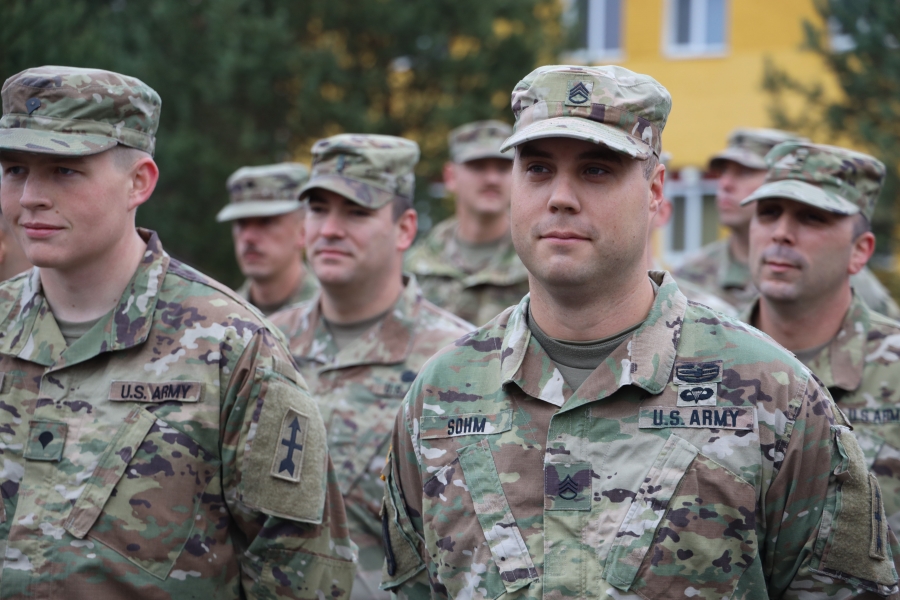 Sgt. Samuel Sohm with the Wisconsin National Guard is stationed at Yavoriv, or the Joint Multinational Training Group-Ukraine. The US military works with Ukrainian armed forces as part of a training mission to modernize Ukraine's military.

It’s a reality not lost on Sgt. Samuel Sohm, also with the Wisconsin National Guard. He says he feels “very keenly a heart for Ukrainians, because their country, quite frankly, was attacked.”

“They were attacked and that’s a big deal to me,” Sohm said. “I understand that and I feel that in my own heart, and so I would say to the Ukrainians, the Americans are here for a reason, we’re here to help train we’re here to help you.”

The Dec. 9 peace negotiations may change things for the war in Donbas. But in the meantime, Ukraine continues to lose troops, and the wall of photos outside St. Michael’s monastery keeps growing.