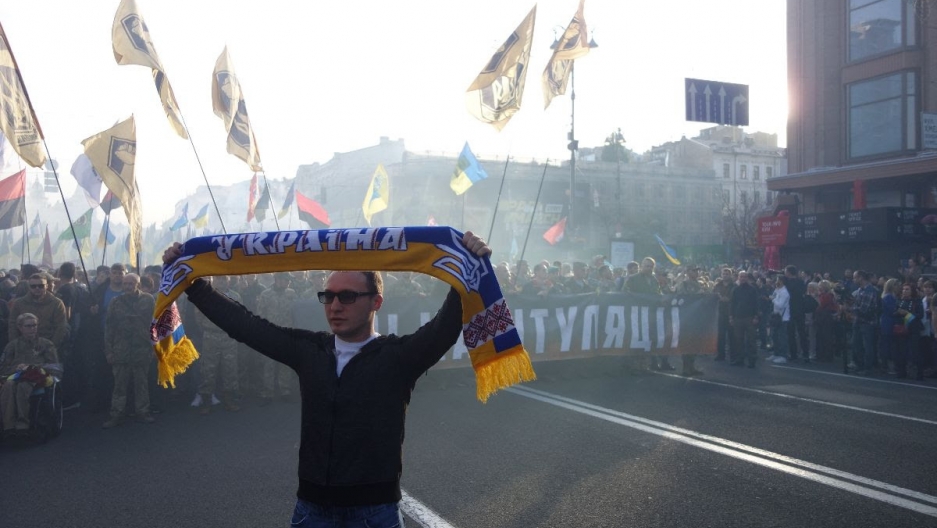 A protester holding a "Ukraine" scarf poses during the "march against capitulation" on Oct. 14, 2019, in Kyiv, Ukraine.

Last month, Ukrainian president Volodymyr Zelenskiy stepped into the press room of the Bankova, — an imposing Soviet-era building with Corinthian columns — and made a public announcement that sparked nationwide confusion and then — anger: He stated that he agreed with Russia on a strategy to bring the five-year conflict in Eastern Ukraine to an end.

Among other provisions, a “special status” of autonomy would be granted to the Ukrainian territories currently controlled by Russia-backed separatist groups, in exchange for the region’s return to Ukrainian rule.

Tired of the conflict in eastern Ukraine, citizens remain split on the path toward peace — and how much Ukraine should give up to achieve it.

Outside, a few hundred people quickly gathered in Kyiv’s Independence Square to denounce Zelenskiy’s plan. On Oct. 14, two weeks after the press conference, nearly 12,000 protesters marched through the streets of the capital against what they saw as a “capitulation” of their government against Russia.

The protest, one of the largest in the Ukrainian capital since the 2014 Maiden revolution, became the most visible reaction to Zelenskiy’s attempt to move forward with the peace process. 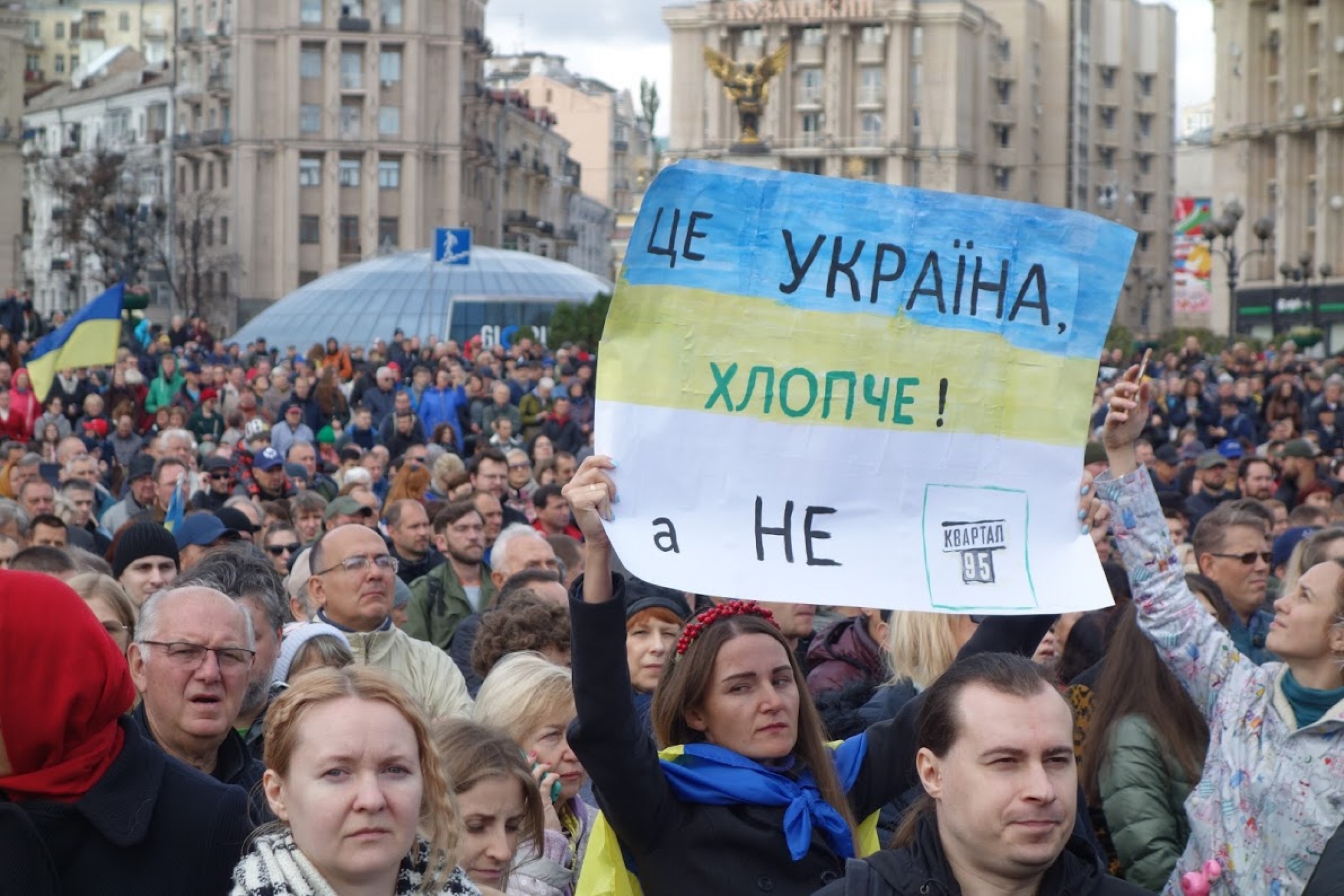 A protester holds a sign to call out Ukrainian President Volodymyr Zelenskiy during a protest on Oct. 2, 2019, in Kyiv, Ukraine. "It's Ukraine, dude, not Kvartal 95," the sign reads, a reference to Zelenskiy's former production company.

Volodymyr Zelenskiy, a 41-year-old former TV star unexpectedly elected to the presidency in April 2019, may see the agreement as the only way to end a conflict that has killed more than 13,000 people and displaced more than 1 million others since 2014, and created a 265-mile frontline cutting the Ukrainian Donbas region in half.

The plan, called the “Steinmeier Formula,” after the former German foreign minister who first devised it in 2016, is derived from a peace agreement first signed in Minsk in 2015, but never fully implemented. The 1-page document signed on Oct. 1 requires Ukraine to hold elections in the separatist territories under international supervision as well as to define a “special status” of autonomy for the region.

Donbas would then go back under Ukrainian control, but with a degree of autonomy that could allow Russia to maintain influence on the region. “It’s a painful compromise,” Ukrainian Foreign Minister Vadym Prystaiko admitted to journalists a day after the Oct. 14 protests.

“Compromise is an empty word. ... It all depends on what you put in it.”

But critics disagree with this compromise as Ukraine’s only option. “Compromise is an empty word,” says Igor Kozlovsky, a religious scholar from the Donbas city of Donetsk. “It all depends on what you put in it.”

The issue is a personal one for Kozlovsky: A vocal pro-Ukrainian figure, he opted to stay in Donetsk in 2014 to take care of his son, who has Down syndrome and is paralyzed, even after rebel fighters supported by Russia declared a separatist “Donetsk People’s Republic.”

Arrested in 2016 and accused of spying, the 65-year-old academic spent two years in captivity before being released in December 2017, as part of a prisoner swap between Kyiv and the separatist republics.

Now, he fears Zelenskiy’s policy — which former Ukrainian President Petro Poroshenko dubbed the “Putin formula” — could lead to a “loss of sovereignty.” 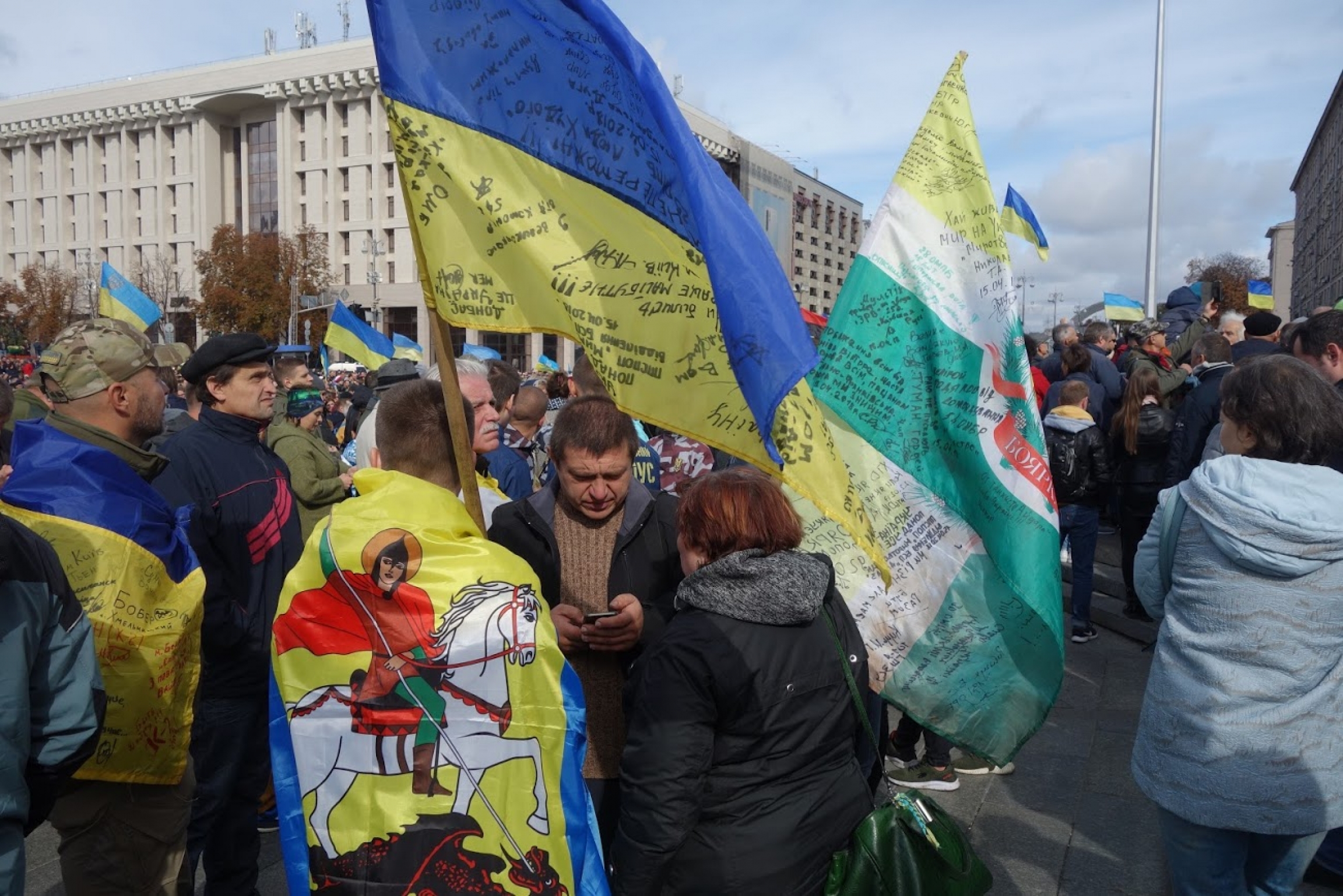 Several polls show that a large part of Ukraine objects to most of the specific compromises mentioned in the 2015 Minsk agreement that Zelenskiy could now attempt to fulfill. Fifty-six percent oppose giving the Donbas region a “special status” of autonomy enshrined in the constitution, according to the Razumkov Center, a Ukrainian think tank and polling agency; and 59% are against a general amnesty for separatist fighters, a poll by Rating, a leading Ukrainian polling agency.

Other polls over the last year paint a more complicated picture, however. "Most Ukrainians want peace, but a peace that is beneficial to Ukraine," according to Lyubomir Mysiv, the deputy head of Rating.

In December 2018, as the presidential race was about to kick-off, a survey by the Razumkov Center found that 67% of Ukrainians felt a compromise with Russia or the Russia-backed separatist republics was necessary to solve the conflict in Donbas, a figure that remained stable over 2019. Zelenskiy later made the quick resolution of the conflict in Eastern Ukraine one of his major campaign promises and, on April 21, trounced then-president Poroshenko in the election’s second round.

“Our very first task is to end the hostilities in Donbas,” the new president told the parliament during his May 20 inauguration speech. For this, he added, “I’m ready to take difficult decisions, to lose my popularity, my ratings.”

Ukrainians support a compromise to end the war, polls show — just not any compromise. They also haven’t fully rallied behind the initial anti-Zelenskiy protests: a survey by the Kyiv International Institute of Sociology (KMIS), a respected Ukrainian sociological research company, found that only 26% of the population supported the Oct. 1 and 2 protests, which were spearheaded by the European Solidarity party of Poroshenko, veteran organizations as well as the far-right Azov organization.

“Uncertainty is probably the best way to describe how society feels about these issues."

“Uncertainty is probably the best way to describe how society feels about these issues,” Volodymyr Ishchenko, a research fellow at the Dresden University Institute of Slavic studies, told The World. Answers also change depending on the way a question is framed: In July, a KMIS poll found that 53% of Ukrainians believed that Donbas should go back to Ukraine under its former, non-autonomous, status, with 20% supporting a status of autonomy. However, when asked whether they’d be ready to support autonomy for the region “if it led to the cessation of hostilities and a peace settlement,” 48% said yes, with just 33% opposed.

“My interpretation of this data is that most Ukrainians don’t consider a special status to be the ideal option, but they would be ready to accept it if it was seen as the only solution,” Ishchenko said.

There is still room for negotiation, but even if a consensus can emerge in Ukrainian society and Zelenskiy’s peace strategy bears fruit, this uncertainty is likely to continue, analysts believe, as hundreds of thousands of people on both sides of the frontline must attempt to overcome years of war and division.

And a consensus is far from a given — Moscow still looks reluctant to agree to a peace summit called on by the Ukrainian president.

Related: As Ukraine's presidential election approaches, the Kremlin is all the more comfortable in Crimea

Now settled in Kyiv, Kozlovsky does not plan to go back to Donetsk, his family’s native city and where he himself spent nearly his whole his life. “I would like to go back and pick up the things I couldn’t take with me, my books, my archives,” he said after a moment of hesitation. “But live there … there’s too much pain, too many memories, of the tortures, of the people who denounced me. I know who wrote those denunciation letters. How could I look them in the eyes?”